Power Up: Cockroaches Employ a “Force Boost” To Chew Through Tough Materials

New research indicates that cockroaches use a combination of fast and slow twitch muscle fibres to give their mandibles a “force boost” that allows them to chew through tough materials.

The study, published today in PLOS ONE, shows that cockroaches activate slow twitch muscle fibres only when chewing on tough material such as wood that requires repetitive, hard biting to generate a bite force 50 times stronger than their own body weight.

“As insects play a dominant role in many ecosystems, understanding the amount of force that these insects can exert through their mandibles is a pivotal step in better understanding behavioural and ecological processes and enabling bioinspired engineering,” explains Tom Weihmann from the University of Cambridge’s Department of Zoology, lead author of the study. “Insects provide a major part of the faunal biomass in many terrestrial ecosystems. Therefore they are an important food source but also crucial as decomposers of plants and animals. In this way they are crucial for material cycles and the ecological balance.”

“Ours is the first study to measure the bite forces of ordinary insects, and we found that the American cockroach, Periplaneta americana, can generate a bite force around 50 times stronger than their own body weight. In relative terms that’s about five times stronger than the force a human can generate with their jaws,” he adds. Previous studies have focused on the biting action of larger animals, particularly vertebrates, which have jaws full of teeth that they use to grind food, catch prey, or fend off other animals. But insects, like cockroaches, have different biting mouthparts; they have a pair of strong, horizontally aligned bladelike jaws, or mandibles. The mandibles have an important role in the life of insects: being used not only for shredding food, but also for digging, transport, defence, and feeding offspring.
A side view onto the experimental setup wih the force sensor at the left and the specimen at the right 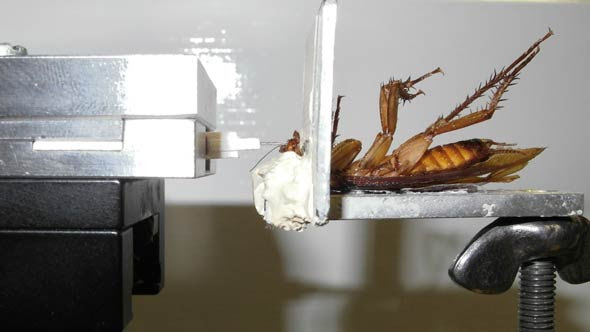 An insect’s mandibles are attached to the head capsule, which consists of thin multi-layered cuticle and forms a complexly structured part of their exoskeleton. The head capsule encloses the driving muscles for all mouth parts and a number of other vital organs of the central nervous and digestive systems. This means that space is limited for the muscles required to operate their scissor-like mandibles; so many insects have muscles with oblique fibres that reduce the amount of thickening that occurs when the muscles contract.

When it comes to investigating biting, cockroaches are the perfect model system – as Weihmann says, they are “extraordinarily ordinary insects with regard to their mouthparts and biting abilities.” The researchers measured the force of 300 bites made by specimen cockroaches across the whole range of mandible opening angles. They found that the cockroaches could exert various levels of force with their bites, from short, weak bites, to particularly strong bites that lasted much longer. -
A micro-computed tomography image of a cockroach head showing the driving muscles of the left mandible 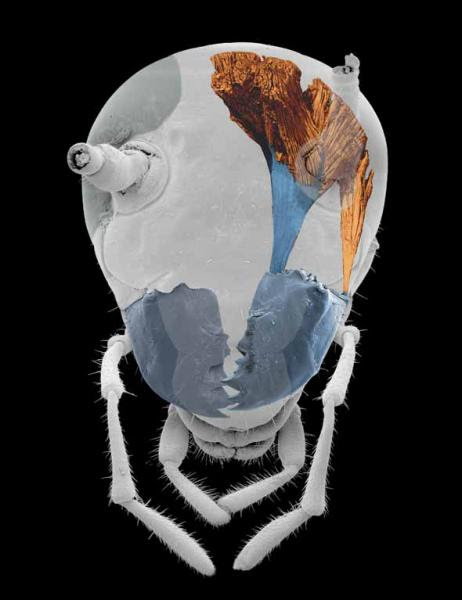 “The weaker, shorter bites were generated by relatively fast muscle fibres, while the longer, stronger bites were driven by additional muscle fibres that take time to reach their maximum force,” explains Weihmann, “these slower muscle fibres give the mandibles a force boost to allow them to exert up to 0.5 Newtons during sustained grasping or chewing.”

“The employment of slow muscle fibres allows very efficiently generated muscle forces with only a minimum of cross section area, and therefore head volume, required,” he adds. Weihmann explains that gaining a better understanding of how the delicate structure of the head capsule withstands such powerful forces over an insect’s lifetime could also have interesting applications for bioinspired engineering.

“It is interesting whenever forces have to be transferred within small hollow capsules, particularly if actuators such as tiny motors, advanced piezo-electric actuators or other sophisticated drives need to be attached to the inner sides of the structure, just like mandible muscles do. With increasing miniaturisation, such designs will become increasingly important. Recent technical implementations in this direction are for instance micro probes inserted into blood vessels or micro surgical instruments.”

The work was funded by the German Research Foundation (DFG) and the Daimler and Benz Foundation.