An enduring astronomical mystery is how stars and galaxies acquire their magnetic fields. Physicists Jonathan Squire and Amitava Bhattacharjee at the U.S. Department of Energy's (DOE) Princeton Plasma Physics Laboratory (PPPL) have found a clue to the answer in the collective behavior of small magnetic disturbances. In a paper published in October in Physical Review Letters, the scientists report that small magnetic perturbations can combine to form large-scale magnetic fields just like those found throughout the universe. This research was funded by the DOE Office of Science.

This is an image of coronal loops on the sun that are linked to magnetic fields. 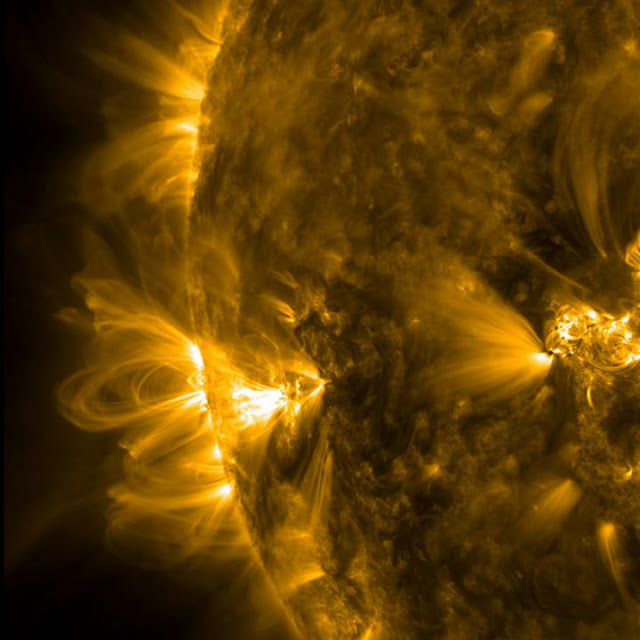 Squire and Bhattacharjee analyzed the behavior of dynamos, which occur when an electrically charged fluid like plasma swirls in a way that creates and then amplifies a magnetic field. Scientists have known that plasma turbulence can create lots of small magnetic fields, but the mechanism by which those fields could produce a single large field is elusive. "We can observe magnetic fields all over the universe," said Squire. "But we currently lack a sound theoretical explanation for how they are generated."

The puzzle consists of the seeming unlikelihood of small disturbances coming together to form something large and organized. Throughout nature, order tends to dissolve into chaos, not the other way around. For instance, if you add a glob of milk to coffee, the glob will dissolve into a collection of tendrils and continue to dissipate until the milk has mixed with all of the coffee. Though not impossible, it's highly unlikely that the dissipated milk would spontaneously gather and reform the original glob.

This kind of natural organization occurs occasionally in the natural world, however. When a tornado forms, the myriad disturbances in the atmosphere during a severe storm coalesce into one giant vortex. But the tornado eventually collapses and the order disappears.

In the paper, Squire and Bhattacharjee show that under certain conditions small magnetic fields -- instead of small velocity fields, which have been studied more often -- can combine to form one large field. After running computer simulations on a PPPL computer named "Dawson," the scientists found that small disturbances can combine to form one large disturbance when there is a lot of velocity shear -- when two areas of a fluid are moving at different speeds. "We used a variety of computational and analytic methods to approach the problem from a few different angles," said Squire.

"The results indicate that small-scale magnetic fluctuations can create large-scale magnetic fields that persist," Bhattacharjee said. "But in order to be conclusive about persistence for long times, we must run simulations for very low dissipation," a measure of energy loss. "It is impossible to run simulations for dissipation as low as those of real astrophysical plasmas, but our analytical and computational results, in the range in which they are done, strongly suggest that such dynamo action is possible."

These findings might lead to greater understanding of the behavior of many kinds of astronomical phenomena, including the disks of material that form around black holes and the 11-year solar cycle of our own sun. Computer programs cannot yet simulate these vast astronomical phenomena, so learning how to create simplified models that capture the workings of these large turbulent systems would be helpful.