An international team of scientists has discovered the first oceanic microplate in the Indian Ocean--helping identify when the initial collision between India and Eurasia occurred, leading to the birth of the Himalayas.

Although there are at least seven microplates known in the Pacific Ocean, this is the first ancient Indian Ocean microplate to be discovered. Radar beam images from an orbiting satellite have helped put together pieces of this plate tectonic jigsaw and pinpointed the age for the collision, whose precise date has divided scientists for decades.

This is the newly discovered tectonic plate, named Mammerickx Microplate. 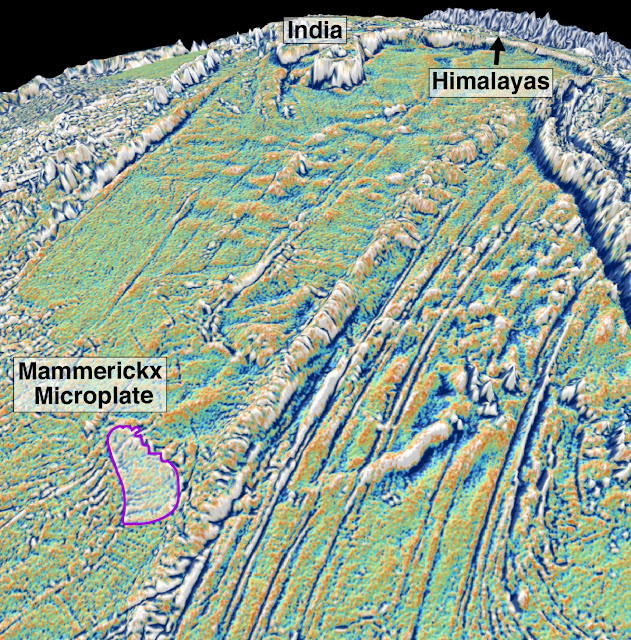 Reported in Earth and Planetary Science Letters, the team of Australian and US scientists believe the collision occurred 47 million years ago when India and Eurasia initially smashed into each other.

Researchers led by the University of Sydney School of Geosciences discovered that crustal stresses caused by the initial collision cracked the Antarctic Plate far away from the collisional zone and broke off a fragment the size of Australia's Tasmania in a remote patch of the central Indian Ocean.

The authors, comprising Professor Dietmar Müller and Dr Kara Matthews from the University of Sydney and Professor David Sandwell from the Scripps Institution of Oceanography, have named the ancient Indian microplate the Mammerickx Microplate, after Dr Jacqueline Mammerickx, a pioneer in seafloor mapping.

The Mammerickx Microplate rotation is revealed by a rotating pattern of grooves and hills that turn the topography of the ocean floor into a jagged landscape. These so-called "abyssal hills" record a sudden increase in crustal stress, dating the birth of the Himalayan Mountain Range to 47 million years ago.

The ongoing tectonic collision between the two continents produces geological stresses that build up along the Himalayas and leads to numerous earthquakes every year--but this latest finding indicates how stressed the Indian Plate became when its northern edge first collided with Eurasia.

The new research shows that 50 million years ago, India was travelling northwards at speeds of some 15 centimetres a year--close to the plate tectonic speed limit. Soon after it slammed into Eurasia crustal stresses along the mid-ocean ridge between India and Antarctica intensified to breaking point. A chunk of Antarctica's crust broke off and started rotating like a ball bearing, creating the newly discovered tectonic plate.

The discovery was made using satellite radar beam mapping from space, which measures the bumps and dips of the sea surface caused by water being attracted by submarine mountains and valleys, combined with conventional marine geophysical data.

Lead author Dr Matthews explains: "The age of the largest continental collision on Earth has long been controversial, with age-estimates ranging from at least 59 to 34 million years ago.

"Knowing this age is particularly important for understanding the link between the growth of mountain belts and major climate change."

Co-author Professor Müller said: "Dating this collision requires looking at a complex set of geological and geophysical data, and no doubt discussion about when this major collision first started will continue, but we have added a completely new, independent observation, which has not been previously used to unravel the birth of this collision.

"It is beyond doubt that the collision must have led to a major change in India's crustal stress field--that's why the plate fragmentation we mapped is a bit like a smoking gun for pinning down the collision age."

Co-author Professor Sandwell from the Scripps Institution of Oceanography said humans had explored and mapped remote lands extensively but the same was not true for our ocean basins.

"We have more detailed maps of Pluto than we do of most of our own planet because about 71 per cent of the Earth's surface is covered with water," Professor Sandwell said.

"Roughly 90% of the seafloor is uncharted by ships and it would take 200 ship-years of time to make a complete survey of the deep ocean outside continental shelves, at a cost of between two- to three billion US dollars.

"That's why advances in comparatively low-cost satellite technology are the key to charting the deep, relatively unknown abyssal plains, at the bottom of the ocean."

The paper 'Oceanic microplate formation records the onset of India-Eurasia collision' was be published in Earth and Planetary Science Letters last week.


Contacts and sources:
Vivienne Reiner
University of Sydney
on November 09, 2015