The long history of severe droughts across Europe and the Mediterranean has largely been told through historical documents and ancient journals, each chronicling the impact in a geographically restricted area. Now, for the first time, an atlas based on scientific evidence provides the big picture, using tree rings to map the reach and severity of dry and wet periods across Europe, and parts of North Africa and the Middle East, year to year over the past 2,000 years.

Maps from a new 2,000-year drought atlas show rainfall conditions over the whole continent, and much of the Mediterranean. A chart for 1741 shows severe drought (brown areas) running from Ireland into central Europe and beyond. A chart for the year 1315 shows the opposite problem -- too much rain (dark green areas), which made farming almost impossible.

Together with two previous drought atlases covering North America and Asia, the Old World Drought Atlas significantly adds to the historical picture of long-term climate variability over the Northern Hemisphere. In so doing, it should help climate scientists pinpoint causes of drought and extreme rainfall in the past, and identify patterns that could lead to better climate model projections for the future. A paper describing the new atlas, coauthored by scientists from 40 institutions, appears today in the journal Science Advances.

"The Old World Drought Atlas fills a major geographic gap in the data that's important to determine patterns of climate variability back in time," said Edward Cook, cofounder of the Tree Ring Lab at Columbia University's Lamont-Doherty Earth Observatory, and leader of all three drought-atlas projects. "That's important for understanding causes of megadroughts, and it's important for climate modelers to test hypotheses of climate forcing and change."

Numerous droughts have hit European agriculture over the ages, but their overall extent has been known mainly only from scattered historical documents. Here, an English calendar page, circa 1310, shows men harvesting wheat. 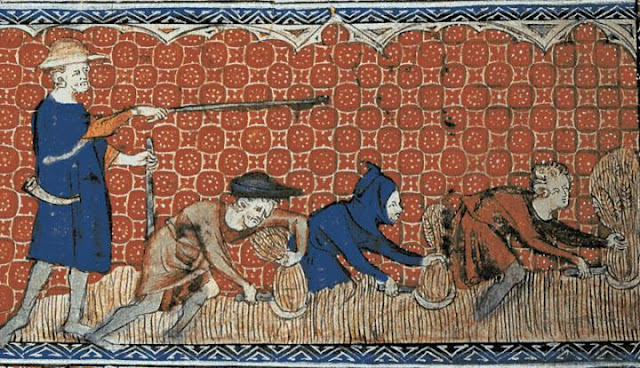 For example, if Europe had a wet year north of the Alps and a dry year to the south, that provides clues to circulation patterns and suggests influence from the North Atlantic Oscillation, one of the primary sources of climate variability affecting patterns in Europe. "You can't get that from one spot on a map," Cook said. "That's the differentiator between the atlas and all these wonderful historic records - the records don't give you the broad-scale patterns."

The new atlas could also improve understanding of climate phenomena like the Atlantic Multi-decadal Oscillation, a variation in North Atlantic sea-surface temperatures that hasn't been tracked long enough to tell if it is a transitory event, forced by human intervention in the climate system, or a natural long-term oscillation. By combining the Old World Drought Atlas with the Asia and North America atlases, climatologists and climate modelers may also discover other sources of internal climate variability that are leading to drought and wetness across the Northern Hemisphere, Cook said.

In the Science Advances paper, Cook and his coauthors compare results from the new atlas and its counterparts across three time spans: the generally warm Medieval Climate Anomaly (1000-1200); the Little Ice Age (1550-1750); and the modern period (1850-2012).

The atlases together show persistently drier-than-average conditions across north-central Europe over the past 1,000 years, and a history of megadroughts in the Northern Hemisphere that lasted longer during the Medieval Climate Anomaly than they did during the 20th century. But there is little understanding as to why, the authors write. Climate models have had difficulty reproducing megadroughts of the past, indicating something may be missing in their representation of the climate system, Cook said.

The drought atlases provide a much deeper understanding of natural climate processes than scientists have had to date, said Richard Seager, a coauthor of the paper and a climate modeler at Lamont-Doherty Earth Observatory.

The hemispheric scale adds to the potential uses of what was already the gold standard of paleo-hydroclimate research, said Sloan Coats, a climate dynamicist at the University of Colorado who studies megadroughts using the atlases. "The fact that the drought atlases provide a nearly hemispheric view of hydroclimate variability provides an incredible amount of information that can be used to better understand what was happening in the atmosphere and ocean," Coats said.

In Europe and the Mediterranean, the new drought atlas expands scientists' understanding of climate conditions during historic famines.

For instance, an unusually cold winter and spring are often blamed for a 1740-1741 famine in Ireland. The Old World Drought Atlas points to another contributor: rainfall well below normal during the spring and summer of 1741, the authors write in the paper. The atlas shows how the drought spread across Ireland, England and Wales.

The atlas also tracks the reach of the great European famine of 1315-1317, when historical documents describe how excessive precipitation across much of the continent made growing food nearly impossible. The atlas tracks the hydroclimate across Europe and shows its yearly progressions from 1314 to 1317 in detail, including highlighting drier conditions in southern Italy, which largely escaped the crisis.

The atlas may also help shed light on more recent phenomena, including a record 2006-2010 drought in the Levant that a recent Lamont study suggests may have helped spark the ongoing Syrian civil war.

The North America atlas, published in 2004, has been used by other researchers to suggest that a series of droughts starting around 900 years ago may have contributed to the eventual collapse of native cultures. Likewise, the Asia atlas, published in 2010, has led researchers to connect droughts, at least in part, to the fall of Cambodia's Angkor culture in the 1300s, and China's Ming dynasty in the 1600s.

The tree ring data used to create the new atlas included cores from both living trees and timbers found in ancient construction reaching back more than 2,000 years. They come from 106 regional tree ring chronologies, each with dozens to thousands of trees, and were contributed to the project by the International Tree Ring Data Bank and European tree-ring scientists.

The paper, "Old World Megadroughts and pluvials during the Common Era," is available from Science Advances
on November 08, 2015