The grizzled asteroid miner is a stock character in science fiction. Now, a couple of recent events - one legal and the other technological - have brought asteroid mining a step closer to reality.

The legal step was taken when the Senate Commerce, Science and Transportation Committee passed a bill titled H.R. 2262--SPACE Act of 2015. The bill has a number of measures designed to facilitate commercial space development, including a provision that gives individuals or companies ownership of any material that they mine in outer space. According to one estimate, asteroid mining could ultimately develop into a trillion-dollar market.

This is a flawless two inch SrI2 crystal grown in the Burger Lab for use in new generation of gamma-ray spectrometers. 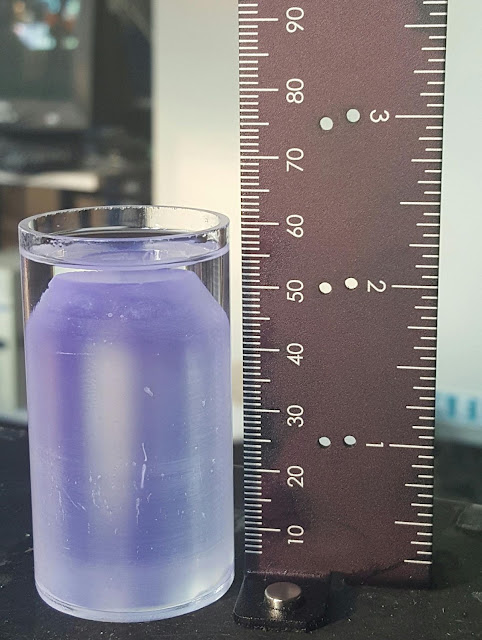 The technological development is a new generation of gamma-ray spectroscope that appears perfectly suited for detecting veins of gold, platinum, rare earths and other valuable material hidden within the asteroids, moons and other airless objects floating around the solar system - just the type of "sensor" that will be needed by asteroid miners to sniff out these valuable materials.

The concept was developed by a team of scientists from Vanderbilt and Fisk Universities, NASA's Jet Propulsion Laboratory and the Planetary Science Institute. It is described in the article "New ultra-bright scintillators for planetary gamma-ray spectroscopy" published Oct. 23 in the SPIE Newsroom. SPIE is the International Society for Optics and Photonics and the SPIE Newsroom highlights noteworthy scientific achievements in the area of optics and photonics.

Planetary gamma-ray spectroscopy takes advantage of the fact that all of the objects in the solar system are continually bombarded by cosmic rays. These high-energy particles from deep space strike the exposed surfaces at relativistic velocities, smashing apart atoms in the top layers and producing a secondary shower of particles, including neutrons. The neutrons then collide repeatedly with the atoms in the material, producing gamma rays as they go. Gamma rays are a form of electromagnetic radiation like light, but they are considerably more powerful and penetrating. The decay of long-lived radioactive elements is a secondary source of gamma rays.

A gamma-ray spectroscope records the intensity and wavelengths of the gamma rays coming from a surface. This spectrum can be analyzed to determine the concentration of a number of important, rock-forming elements, including oxygen, magnesium, silicon and iron...not to mention precious metals like gold and valuable crystals like diamonds.

"Space missions to the Moon, Mars, Mercury and the asteroid Vesta among others have included low-resolution spectrometers, but it has taken months of observation time and great expense to map their elemental surface compositions from orbit," said Professor of Astronomy Keivan Stassun, the Vanderbilt co-author. "With our proposed system it should be possible to measure sub-surface elemental abundances accurately, and to do it much more cheaply because our sensors weigh less and require less power to operate. That is good news for commercial ventures where cost, power and launch weight are all at a premium."

The key to the new instrument is a recently discovered material, europium-doped strontium iodide (SrI2). This is a transparent crystal that can act as an extremely efficient gamma-ray detector. It registers the passage of gamma rays by giving off flashes of light that can be detected and recorded.

"The gold standard for gamma-ray spectroscopy is the high purity germanium (HPGe) detector," said Fisk Professor of Physics Arnold Burger, who developed the SrI2 detector. "However, it requires cryogenic cooling so it is very bulky. It also needs vacuum-tube technology so it consumes too much energy to run on batteries. SrI2 isn't quite as good HPGe, but it is more than adequate to do the job and it is compact enough and its power requirements low enough so that it can be used in spacecraft and even placed on robotic landers."

According to Stassun and Burger, the project is one of the success stories of theFisk-Vanderbilt Master's-to-Ph.D. Bridge Program which is designed to increase the number of underrepresented minority students in the science, technology, engineering and mathematics disciplines. The program has produced 15 Ph.D. graduates in physics, astronomy and materials science and is on track to produce 3-5 Ph.D.'s per year, making it one of the most prolific sources of minority Ph.D.'s in the country.

"The collaboration we have initiated with colleagues at the Planetary Science Institute in Arizona and at NASA's Jet Propulsion Laboratory in Pasadena will provide future sites for training our Bridge students and exposing them to additional facilities and capabilities outside the Vanderbilt community," Burger said.

It also provides Bridge students with a new area of research to pursue. The program has formed an astro-vaterials team to focus on the spectroscope's development. Last month, several students co-authored a paper published in the Journal of Astronomical Telescopes, Instruments and Systems that reported SrI2 performance at high gamma-ray energies.

"The opportunity to be involved in such a project as a graduate student is an amazing opportunity," said Anna Egner, who is leading the team's effort to build a mock-up of the spectroscope for an actual payload package. "Having always been enchanted and intrigued by physics and astronomy, working on an instrument that might one day fly into space is awesomely exciting."

The first commercial missions to nearby asteroids could launch as early as 2020, but it will be decades before asteroid mining begins in earnest. In the meantime, the new spectroscopic technology promises to provide planetary scientists with new details about the chemical composition of the asteroids, comets, moons and minor planets in the solar system: information that is certain to improve our understanding of how the solar system formed. In addition, it could become an important tool in the planetary defense arsenal because it can determine whether objects crossing Earth's orbit are made from rock or ice.