Mars has been all over the news, from the blockbuster finding of seasonal water on the Red Planet to the wildly successful film, The Martian. Now, researchers--including those at the University of Iowa--have learned more about what happened to the climate on Mars since it was a warm and watery planet billions of years ago.

The researchers announced on Thursday that NASA's MAVEN (Mars Atmosphere and Volatile Evolution) mission has determined the rate at which the Martian atmosphere currently is losing gas to space via stripping by the solar wind. Loss of gas to space appears to have been an important part of why the Martian climate went from an early, warm, wet one that might have been able to support life at the surface to the cold, dry, desert planet we see today.

In March of 2015, the sun launched a coronal mass ejection -- a bubble of energized plasma traveling at about 2 million miles per hour -- toward Mars, compressing the Martian magnetosphere to around two-thirds of its normal size and pushing it inward by almost 600 miles, which exposed more of Mars' atmosphere to the solar wind's electromagnetic fields. Similar events were probably larger and more frequent early in the solar system's history, suggesting they played a significant impact on Mars over its lifetime. 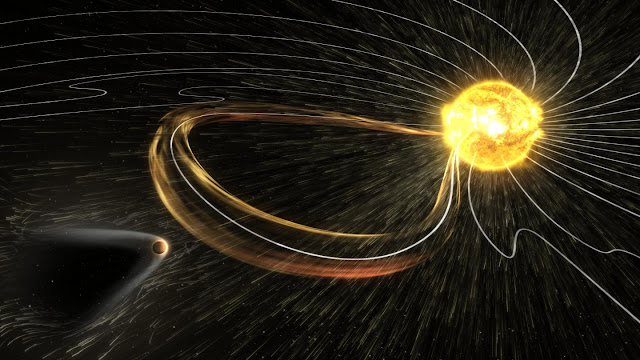 Jasper Halekas, associate professor in physics and astronomy at the UI and principal investigator of the Solar Wind Ion Analyzer instrument on MAVEN, took part in a NASA media briefing in which the agency gave its first results from the mission.

Halekas explains the sun has played a role in the planet's loss of atmosphere and water to space, by the solar wind accelerating ions (electrically charged gas atoms) in the Martian upper atmosphere and stripping them from the planet altogether. He says that powerful solar storms, called coronal mass ejections, can multiply the ions' escape by as much as a factor of 20.

Halekas adds that the coronal mass ejections produce such a pronounced effect because the solar storms collapsed the Martian magnetosphere, reducing its size by approximately 600 miles, and exposing more of the planet's atmosphere to the solar wind.

"The removal of atmosphere from Mars by episodic extreme events may have been very important over Mars' history, just as a single tsunami can remove a portion of the ocean shore that would have taken millennia to erode by the steady lapping of the tides," Halekas says.

The first scientific results from the MAVEN mission were published online on Thursday in a series of papers in the journals Science and Geophysical Research Letters. Halekas and Suranga Ruhunusiri, a post-doctoral researcher in physics and astronomy at the UI, are co-authors on 21 of the papers and are lead authors on three manuscripts.

MAVEN measurements have demonstrated that the solar wind is able to strip away gas at a rate of about 100 grams (equivalent to roughly 1/4 pound) every second. The loss comes from three different regions around the planet: above the Martian poles in a "polar plume"; down the "tail," where the solar wind flows behind Mars; and from the extended cloud of gas that always surrounds Mars.

A series of dramatic solar storms hit Mars' atmosphere in March 2015, and MAVEN found that the loss was accelerated. The combination of greater loss rates and increased solar storms in the past suggests that loss of atmosphere to space was likely a major process in changing the Martian climate.

"Like the theft of a few coins from a cash register every day, the loss becomes significant over time," says MAVEN Principal Investigator Bruce Jakosky, of the University of Colorado. "More importantly, with MAVEN we've seen that the atmospheric erosion increases significantly during solar storms. So we think that the loss rate was much higher billions of years ago when the sun was young and more active. As a result, we expect that loss of atmosphere to space was likely to have been a major process in changing the Martian climate."

The mission's goal is to determine how much of the planet's atmosphere and water has been lost to space. Scientists are interested in the history of liquid water on Mars because it has had a major geological impact on the surface over time and because it is necessary for life as we know it to exist at the surface.

MAVEN has been operating at Mars for just over a year and is about to complete its primary science mission on November 16.