In the 19th century, Darwin’s most vocal scientific advocate was Thomas Henry Huxley, who is also remembered as a pioneer of the hypotheses that birds are living dinosaurs. He noticed several similarities of the skeleton of living birds and extinct dinosaurs, among them, a pointed portion of the anklebone projecting upwards onto the shank bone (aka drumstick). This “ascending process” is well known to specialists as a unique trait of dinosaurs.

However, until the late 20th century, many scientists were doubtful about the dinosaur-bird link. Some pointed out that the ascending process in most birds was a projection of the neighbouring heel bone, rather than the anklebone. If so, it would not be comparable, and would not support the dinosaur-bird link. Some argued that in bird embryos, the ascending process develops from the anklebone in dinosaur-like fashion, while others considered that its development in birds is unique and different from dinosaurs.

Nowadays, the dinosaur-bird link is mainstream science, thanks to new methods of data analysis, and a dense series of intermediate fossils (including feathered dinosaurs). However, the disagreements about the composition and embryology of the avian ankle were never clarified fully. A new study in Nature Communications by Luis Ossa, Jorge Mpodozis and Alexander Vargas, from the University of Chile, provides a careful re-examination of ankle development in 6 different major groups of birds, selected specifically to clarify conditions in their last common ancestor. It also utilizes new techniques that allow three-dimensional analysis of fluorescent embryonic skeletons, using advanced spin-disc confocal microscopy and software.

This work has revealed that the ascending process does not develop from either the heel bone or the ankle bone, but from a third element, the intermedium. In the ancient lineage of paleognath birds (such as tinamous, ostriches and kiwis) the intermedium comes closer to the anklebone, producing a dinosaur-like pattern.

However, in the other major avian branch (neognaths), which includes most species of living birds, it comes closer to the heel bone; that creates the impression it is a different structure, when it is actually the same. “It puts the final nail in the anti-dinosaur coffin” says Jacques Gauthier, a vertebrate paleontologist and professor at Yale University “The dinosaurian ascending process is retained in all birds, though it has changed its association from ankle to heel bones in neognath birds”.

More remarkably, however, this finding reveals an unexpected evolutionary transformation in birds. In embryos of the land egg-laying animals, the amniotes (which include crocodilians, lizards, turtles, and mammals, who secondarily evolved live birth) the intermedium fuses to the anklebone shortly after it forms, disappearing as a separate element. This does not occur in the bird ankle, which develops more like their very distant relatives that still lay their eggs in water, the amphibians (See Figure).

Like modern amphibians, the remote ancestors of birds once had three bones in their upper ankle. When these evolved into land egg-laying animals, only two bones were present in this region. In dinosaurs, one of these, the anklebone, presents a pointed upward projection, the “ascending process”. This trait is also present in birds, which are living dinosaurs. A new detailed embryological study in birds reveals that their ankle has re-evolved an amphibian-like developmental pattern, with three separate elements, one of which becomes the dinosaurian ascending process 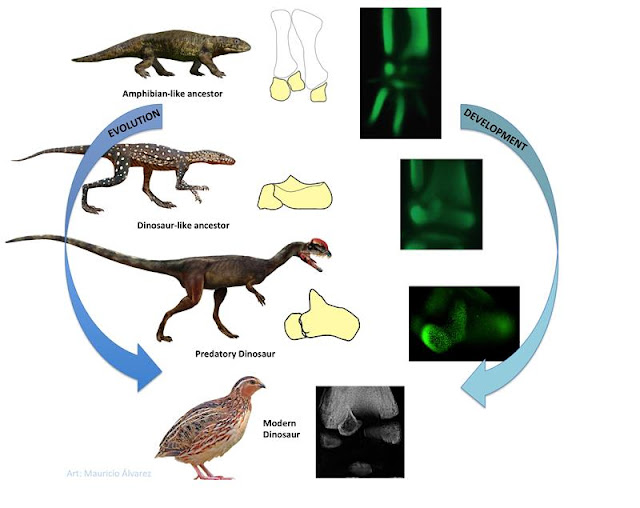 Since birds clearly belong within land egg-laying animals, their ankles have somehow resurrected a long-lost developmental pathway, still retained in the amphibians of today - a surprising case of evolutionary reversal. The study also presented fossil evidence from juvenile specimens of toothed birds from the Cretaceous period. These show that, at this early stage of bird evolution, the ascending process already developed separately. Evolutionary reversions have always generated much discussion among scientists, because ancient traits can occasionally re-appear in a highly transformed context.

A recent paper in BMC Evolutionary Biology (Diaz and Trainor, 2015) has revealed that chameleons also re-evolved an independent intermedium, in the specialized functional context of a climbing reptile. The reappearance of this long-lost developmental pattern in highly evolved organisms like birds and chameleons could be compared to finding primitive clockwork gears inside your latest smartphone. These intriguing discoveries are bound to renew discussion about the interplay between the evolution of new functions and the resurrection of old developmental patterns.