The cuckoo is not only capable of finding its way from unknown locations; it does this through a highly complex individual decision making process. Such skills have never before been documented in migratory birds. A new study shows that navigation in migratory birds is even more complex than previously assumed. The Center for Macroecology, Evolution and Climate at the University of Copenhagen led the study with the use of miniature satellite tracking technology.

Eleven cuckoos were relocated from Denmark to Spain. Red lines show the displaced cuckoos' migration route to Central Africa via targeted stopover sites and back to Denmark. Black lines show the normal migration route of cuckoos from Denmark to Central Africa and back again. The research was led by the Center for Macroecology, Evolution and Climate at the Natural History Museum of Denmark at the University of Copenhagen.

In an experiment, 11 adult cuckoos were relocated from Denmark to Spain just before their winter migration to Africa was about to begin. When the birds were released more than 1,000 km away from their well-known migration route, they navigated towards the different stopover areas used along their normal route.

"The release site was completely unknown to the cuckoos, yet they had no trouble finding their way back to their normal migratory route. Interestingly though, they aimed for different targets on the route, which we do not consider random. This individual and flexible choice in navigation indicates an ability to assess advantages and disadvantages of different routes, probably based on their health, age, experience or even personality traits. They evaluate their own condition and adjust their reaction to it, displaying a complicated behavior which we were able to document for the first time in migratory birds", says postdoc Mikkel Willemoes from the Center for Macroecology, Evolution and Climate at the University of Copenhagen.

Satellite technology has made it possible for the first time to track the complete migration of a relocated species and reveal individual responses. 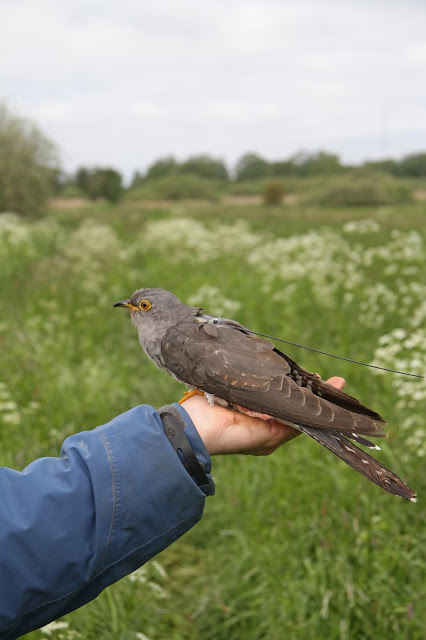 Previously, in 2014, the Center also led a study mapping the complete cuckoo migration route from Denmark to Africa. Here they discovered that during autumn the birds make stopovers in different areas across Europe and Africa. It was these areas the displaced cuckoos aimed for: Of the 11 birds, one flew to Poland, one to the Balkans, one to Chad and three of them flew to the Democratic Republic of Congo. From there, they followed their familiar migration route. The last five birds lost their transmitting signal.

"In order to select an individual strategy, the birds should be capable of balancing perceived gains and risks of several different scenarios. Such a task would require knowledge of the current location in relation to all of the possible goals as well as distances to each of the goals. This tells us that bird migration in general is far more complex than previously assumed", says Mikkel Willemoes.

The study was carried out in collaboration with Doñana Biological Station in Spain and the Max Planck Institute for Ornithology in Germany.

Bird relocation studies have been carried out in the past, but recent satellite technology has made it possible for the first time to track the complete migration of a relocated species and reveal individual responses.

"We have received remarkable details on the movement of adult birds. The next step is to develop smaller transmitters that will enable us to follow young cuckoos on a relocation flight. Without prior migration experience, their choices will reveal new insight on how they navigate from unknown locations" says Associate Professor Kasper Thorup from the Center for Macroecology, Evolution and Climate.

Cuckoos are particularly suitable for navigation studies, as they lay their eggs inside the nests of other bird species. Growing up without contact to siblings or biological parents, the young cuckoo has no one to follow during migration. Flying alone and at night, it relies entirely on instincts, inherent abilities and the experiences gained later in life. Now, scientists can conclude that these traits are combined into a complex individual decision making strategy.

The study is published in Scientific Reports.