The baffling and strange behaviors of black holes have become somewhat less mysterious recently, with new observations from NASA's Explorer missions Swift and the Nuclear Spectroscopic Telescope Array, or NuSTAR. The two space telescopes caught a supermassive black hole in the midst of a giant eruption of X-ray light, helping astronomers address an ongoing puzzle: How do supermassive black holes flare?

The results suggest that supermassive black holes send out beams of X-rays when their surrounding coronas -- sources of extremely energetic particles -- shoot, or launch, away from the black holes.

"This is the first time we have been able to link the launching of the corona to a flare," said Dan Wilkins of Saint Mary's University in Halifax, Canada, lead author of a new paper on the results appearing in the Monthly Notices of the Royal Astronomical Society. "This will help us understand how supermassive black holes power some of the brightest objects in the universe."

Figure 1 shows how a shifting corona can create a flare of X-rays around a black hole. The corona gathers inward (left), becoming brighter, before shooting away from the black hole (middle and right). Astronomers don't know why the coronas shift, but they have learned that this process leads to a brightening of X-ray light that can be observed by telescopes.

Supermassive black holes don't give off any light themselves, but they are often encircled by disks of hot, glowing material. The gravity of a black hole pulls swirling gas into it, heating this material and causing it to shine with different types of light. Another source of radiation near a black hole is the corona. Coronas are made up of highly energetic particles that generate X-ray light, but details about their appearance, and how they form, are unclear.

Astronomers think coronas have one of two likely configurations. The "lamppost" model says they are compact sources of light, similar to light bulbs, that sit above and below the black hole, along its rotation axis. The other model proposes that the coronas are spread out more diffusely, either as a larger cloud around the black hole, or as a "sandwich" that envelops the surrounding disk of material like slices of bread. In fact, it's possible that coronas switch between both the lamppost and sandwich configurations.

The new data support the "lamppost" model -- and demonstrate, in the finest detail yet, how the light-bulb-like coronas move. The observations began when Swift, which monitors the sky for cosmic outbursts of X-rays and gamma rays, caught a large flare coming from the supermassive black hole called Markarian 335, or Mrk 335, located 324 million light-years away in the direction of the constellation Pegasus. This supermassive black hole, which sits at the center of a galaxy, was once one of the brightest X-ray sources in the sky.

"Something very strange happened in 2007, when Mrk 335 faded by a factor of 30. What we have found is that it continues to erupt in flares but has not reached the brightness levels and stability seen before," said Luigi Gallo, the principal investigator for the project at Saint Mary's University. Another co-author, Dirk Grupe of Morehead State University in Kentucky, has been using Swift to regularly monitor the black hole since 2007.

A is depicted in this artist's concept, surrounded by a swirling disk of material falling onto it. The purplish ball of light above the black hole, a feature called the corona, contains highly energetic particles that generate X-ray light. If you could view the corona with your eyes, it would appear nearly invisible sincesupermassive black hole  we can't see its X-ray light. 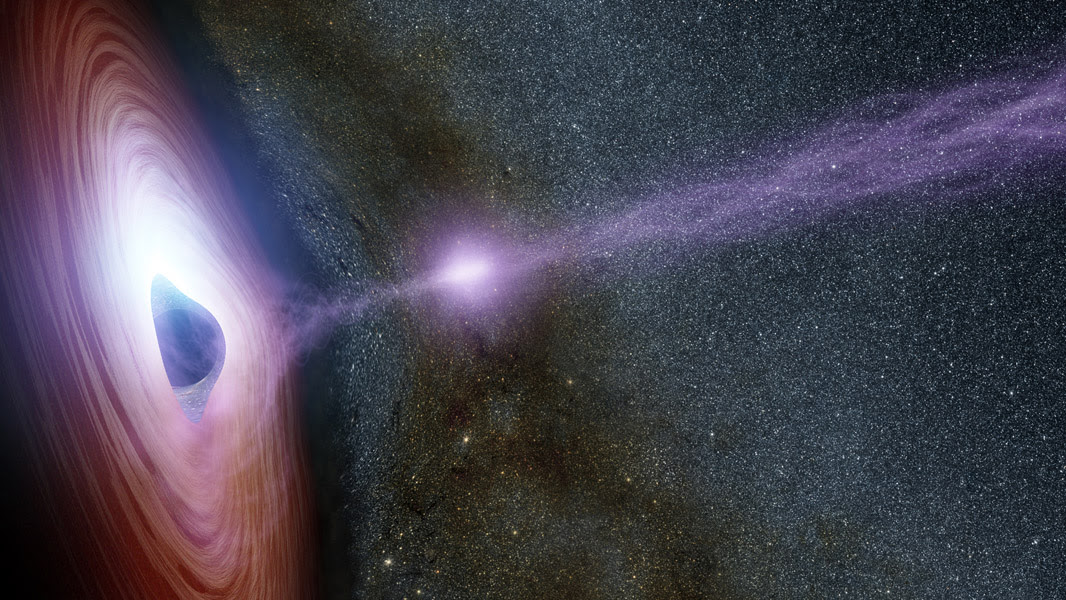 In September 2014, Swift caught Mrk 335 in a huge flare. Once Gallo found out, he sent a request to the NuSTAR team to quickly follow up on the object as part of a "target of opportunity" program, where the observatory's previously planned observing schedule is interrupted for important events. Eight days later, NuSTAR set its X-ray eyes on the target, witnessing the final half of the flare event.

After careful scrutiny of the data, the astronomers realized they were seeing the ejection, and eventual collapse, of the black hole's corona.

"The corona gathered inward at first and then launched upwards like a jet," said Wilkins. "We still don't know how jets in black holes form, but it's an exciting possibility that this black hole's corona was beginning to form the base of a jet before it collapsed."

How could the researchers tell the corona moved? The corona gives off X-ray light that has a slightly different spectrum -- X-ray "colors" -- than the light coming from the disk around the black hole. By analyzing a spectrum of X-ray light from Mrk 335 across a range of wavelengths observed by both Swift and NuSTAR, the researchers could tell that the corona X-ray light had brightened -- and that this brightening was due to the motion of the corona.

Coronas can move very fast. The corona associated with Mrk 335, according to the scientists, was traveling at about 20 percent the speed of light. When this happens, and the corona launches in our direction, its light is brightened in an effect called relativistic Doppler boosting.

Putting this all together, the results show that the X-ray flare from this black hole was caused by the ejected corona.

"The nature of the energetic source of X-rays we call the corona is mysterious, but now with the ability to see dramatic changes like this we are getting clues about its size and structure," said Fiona Harrison, the principal investigator of NuSTAR at the California Institute of Technology in Pasadena, who was not affiliated with the study.

Many other black hole brainteasers remain. For example, astronomers want to understand what causes the ejection of the corona in the first place.

NuSTAR is a Small Explorer mission led by Caltech and managed by NASA's Jet Propulsion Laboratory in Pasadena, California, for NASA's Science Mission Directorate in Washington. NuSTAR was developed in partnership with the Danish Technical University and the Italian Space Agency (ASI). The spacecraft was built by Orbital Sciences Corp., Dulles, Virginia. NuSTAR's mission operations center is at UC Berkeley, and the official data archive is at NASA's High Energy Astrophysics Science Archive Research Center. ASI provides the mission's ground station and a mirror archive. JPL is managed by Caltech for NASA.