Ant Colony Responds To Predation Simulation as a 'Superorganism'

Ants may respond to disturbances in their nest as one highly organized 'superorganism', according to a study published November 11, 2015 in the open-access journal PLOS ONE by Thomas O'Shea-Wheller from the University of Bristol, England, and colleagues.

Ant colony is shown in an artificial nest. 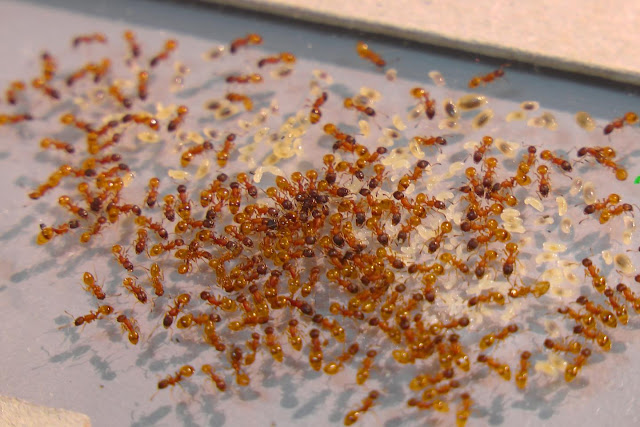 Ant colonies are incredibly complex, and at the same time, intensely cooperative, which is why they are often referred to as single 'superorganisms.' The authors of this study, interested in the extent to which ants behave as a single entity, simulated different predator attacks on 30 migrating ant colonies. To observe the ants' responses to predation at different locations in and near the nest, they removed ant scouting at the colony periphery, and then separately, removed workers from the center of the nest.

When scouts were removed from the periphery, the foraging 'arms' of the colony retracted back into the nest. However, when ants were removed from within the center of the nest itself, the whole colony fled, seeking asylum in a new location. While the first of these scenarios could be seen as akin to burning your hand on a stove, the second is more of a 'house on fire' scare. The authors suggest their results may draw parallels with the nervous systems of single organisms, in that they allow appropriate and location-dependent responses to damage, and suggest that, just as organisms may respond to cell damage via pain, ant colonies respond to loss of workers via group awareness.

Dr. O'Shea-Wheller adds, ''Ants react very differently, and in a coordinated fashion, to perceived predator attacks depending on their location. Just as we may respond to cell damage via pain, ant colonies respond to the loss of individuals via group awareness and reaction.''