When times are good, it pays to be the big fish in the sea; in the aftermath of disaster, however, smaller is better.

According to new research led by the University of Pennsylvania’s Lauren Sallan, a mass extinction 359 million years ago known as the Hangenberg event triggered a drastic and lasting transformation of Earth’s vertebrate community. Beforehand, large creatures were the norm, but, for at least 40 million years following the die-off, the oceans were dominated by markedly smaller fish.

An imagined post-extinction scene, when the ocean was filled with tiny fish. 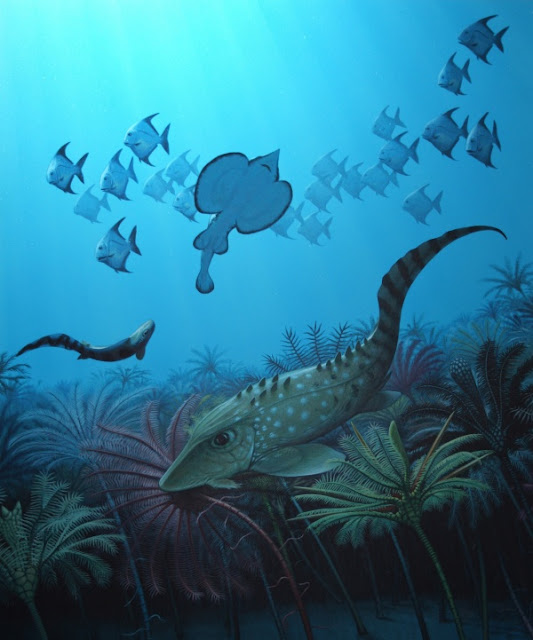 “Rather than having this thriving ecosystem of large things, you may have one gigantic relict, but otherwise everything is the size of a sardine,” said Sallan, an assistant professor in Penn’s Department of Earth and Environmental Science in the School of Arts & Sciences.

The finding, which suggests that small, fast-reproducing fish possessed an evolutionary advantage over larger animals in the disturbed, post-extinction environment, may have implications for trends we see in modern species today, such as in fish populations, many of which are crashing due to overfishing.

The research is reported in Science.

Paleontologists and evolutionary biologists have long debated the reasons behind changes in animal body sizes. One of the main theories is known as Cope’s rule, which states that the body size of a particular group of species tends to increase over time because of the evolutionary advantages of being larger, which including avoiding predation and being better able to catch prey.

Other theories suggest that animals tend to be larger in the presence of increased oxygen, or in colder climates.

Still another idea, known as the Lilliput Effect, holds that after mass extinctions, there is a temporary trend toward small body size. But this theory has only been supported with a limited number of species and is highly debated.

The lack of a firm understanding of body-size trends following mass extinctions, is, according the paper, “a glaring oversight considering current declines in global fish populations.”

To sort out the body-size trends around the Hangenberg Event, Sallan and her coauthor, Andrew K. Galimberti, now a graduate student at the University of Maine, amassed a dataset of 1,120 fish fossils spanning the period from 419 to 323 million years ago. They gathered body-size information from published papers, museum specimens, photographs and bits of fossils for which, based on traits known about the species, they could extrapolate a full size.

Their analysis of these fossils revealed that, in line with Cope’s rule, vertebrates gradually increased in size during the Devonian Period, from 419 to 359 million years ago.

Two fish from the Mississippian, post-extinction, immortalized in a fighting pose. 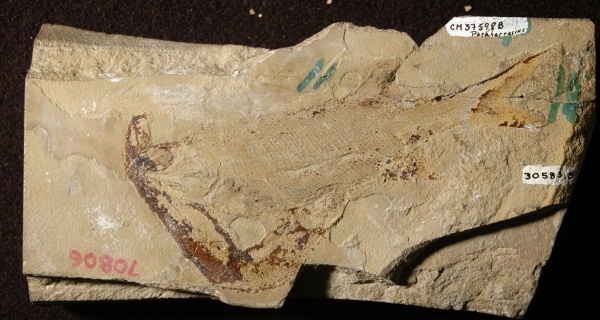 By the end of the Devonian, “there were fish called arthrodire placoderms with large slashing jaws that were the size of school buses, and there were relatives of living tetrapods, or land-dwelling vertebrates, that were almost as large,” Sallan said. “You had some vertebrates that are small, but the majority of residents in ecosystems, from bottom dweller to apex predator, were a meter or more long.”

Then came the mass extinction, which decimated life on the planet. More than 97 percent of vertebrate species were wiped out. Sallan and Galimberti found that, following the extinction event, body size declined and continued downward for much longer than they expected — at least 40 million years.

“Some large species hung on, but most eventually died out,” Sallan said. “So the end result is an ocean in which most sharks are less than a meter and most fishes and tetrapods are less than 10 centimeters, which is extremely tiny. Yet these are the ancestors of everything that dominates from then on, including humans.”

To see if the existing theories relating body size to atmospheric oxygen or temperature could explain their findings, the researchers mapped the body-size trends against climate models of the time period.

“There was no association with either temperature or oxygen, which overturns everything that has been assumed in vertebrates both today and in the past,” Sallan said. “Instead it tells us that these trends must be based entirely on ecological factors.”

The researchers performed further analyses to ensure that sampling biases didn’t affect their study and confirmed that the trends were reflected within major lineages as well as within individual ecosystems.

Sallan said their results suggest that the mass extinction triggered a lasting Lilliput Effect, in which smaller organisms are favored.

“Before the extinction, the ecosystem is stable and thriving so that organisms can spend the time to grow to large sizes before they reproduce, for example,” Sallan said. “But, in the aftermath of the extinction, that ends up being a bad strategy in the long term. So tiny, fast-reproducing fish take over the entire world.”

This pattern mirrors biological succession seen in plant species after a disturbance. Following a forest fire, for example, fast-growing grasses may be the first to colonize an area, followed by shrubs, and only later will large trees come to thrive. While that process occurs on a small scale and may take only decades, it matches the ecosystem and global-scale processes the researchers observed as having occurred during millions of years in the oceans.

With many global fish populations in danger and with some ecologists concerned the planet is on the brink of a sixth major extinction event, this time caused by humans, Sallan said the results should raise alarm about how long large species might take to recover.

“It doesn’t matter what is eliminating the large fish or what is making ecosystems unstable,” she said. “These disturbances are shifting natural selection so that smaller, faster-reproducing fish are more likely to keep going, and it could take a really long time to get those bigger fish back in any sizable way.”