VY Canis Majoris is a stellar goliath, a red hypergiant, one of the largest known stars in the Milky Way. It is 30-40 times the mass of the Sun and 300 000 times more luminous. In its current state, the star would encompass the orbit of Jupiter, having expanded tremendously as it enters the final stages of its life.

The new observations of the star used the SPHERE instrument on the VLT. Theadaptive optics system of this instrument corrects images to a higher degree than earlier adaptive optics systems. This allows features very close to bright sources of light to be seen in great detail [1]. SPHERE clearly revealed how the brilliant light of VY Canis Majoris was lighting up clouds of material surrounding it.

In this very close-up view from SPHERE the star itself is hidden behind an obscuring disc. The crosses are artefacts due to features in the instrument. 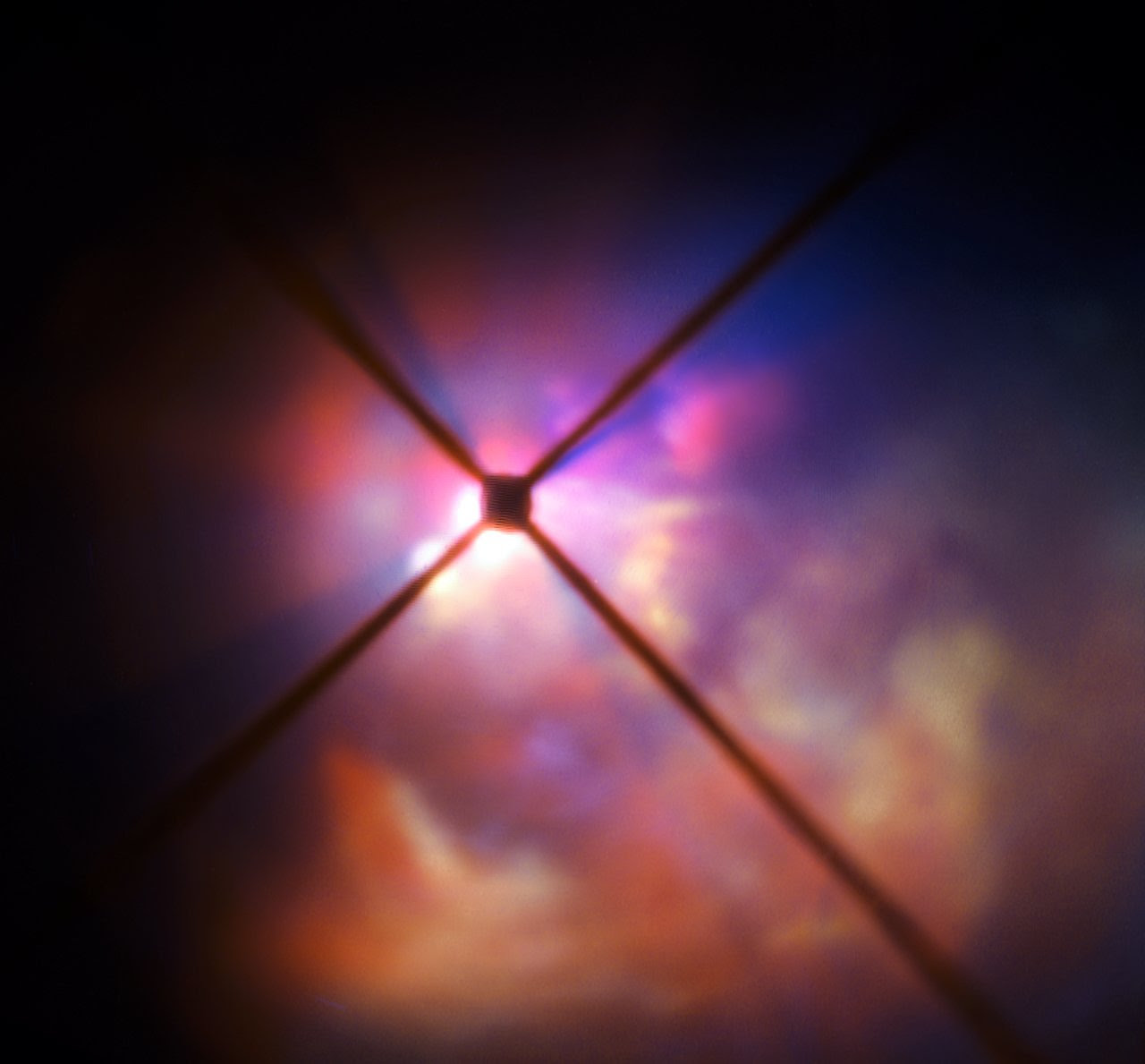 And by using the ZIMPOL mode of SPHERE, the team could not only peer deeper into the heart of this cloud of gas and dust around the star, but they could also see how the starlight was scattered and polarised by the surrounding material. These measurements were key to discovering the elusive properties of the dust.

Careful analysis of the polarisation results revealed these grains of dust to be comparatively large particles, 0.5 micrometres across, which may seem small, but grains of this size are about 50 times larger than the dust normally found in interstellar space.

This wide-field view shows the sky around the very brilliant red hypergiant star VY Canis Majoris, one of the largest stars known in the Milky Way. The star itself appears at the centre of the picture, which also includes clouds of glowing red hydrogen gas, dust clouds and the bright star cluster around the bright star Tau Canis Majoris towards the upper right. This picture was created from images forming part of the Digitized Sky Survey 2. 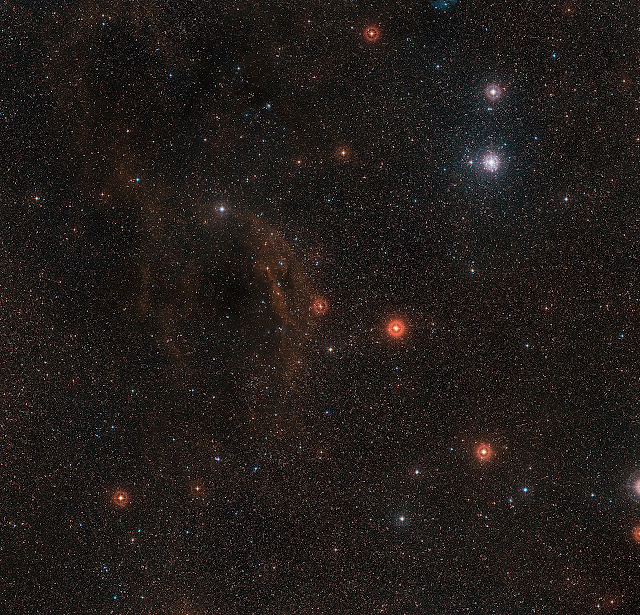 Throughout their expansion, massive stars shed large amounts of material -- every year, VY Canis Majoris sees 30 times the mass of the Earth expelled from its surface in the form of dust and gas. This cloud of material is pushed outwards before the star explodes, at which point some of the dust is destroyed, and the rest cast out into interstellar space. This material is then used, along with the heavier elements created during the supernova explosion, by the next generation of stars, which may make use of the material for planets.

This chart shows the location of the very brilliant red hypergiant star VY Canis Majoris, one of the largest stars known in the Milky Way. Most of the stars visible to the naked eye on a clear and dark night are shown and the location of VY Canis Majoris is marked with a red circle. This star is visible in a small telescope and has a strikingly red colour. 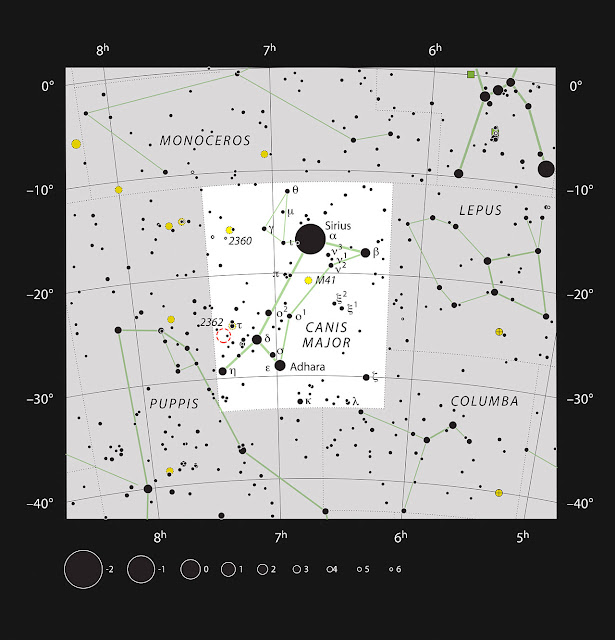 Until now, it had remained mysterious how the material in these giant stars' upper atmospheres is pushed away into space before the host explodes. The most likely driver has always seemed to be radiation pressure, the force that starlight exerts. As this pressure is very weak, the process relies on large grains of dust, to ensure a broad enough surface area to have an appreciable effect [2].

This video sequence takes you on a voyage from a broad vista of the sky into a close-up look at one of the biggest stars in the Milky Way, VY Canis Majoris. The final image comes from the SPHERE instrument on ESO’s Very Large Telescope in Chile.

"Massive stars live short lives," says lead author of the paper, Peter Scicluna, of the Academia Sinica Institute for Astronomy and Astrophysics, Taiwan. "When they near their final days, they lose alot of mass. In the past, we could only theorise about how this happened. But now, with the new SPHERE data, we have found large grains of dust around this hypergiant. These are big enough to be pushed away by the star's intense radiation pressure, which explains the star's rapid mass loss."

The large grains of dust observed so close to the star mean that the cloud can effectively scatter the star's visible light and be pushed by the radiation pressure from the star. The size of the dust grains also means much of it is likely to survive the radiation produced by VY Canis Majoris' inevitable dramatic demise as a supernova [3]. This dust then contributes to the surrounding interstellar medium, feeding future generations of stars and encouraging them to form planets.

The images in the new study are also taken in visible light -- shorter wavelengths than the near-infrared regime, where most earlier adaptive optics imaging was performed. These two factors result in significantly sharper images than earlier VLT images. Even higher spatial resolution has been achieved with the VLTI, but the interferometer does not create images directly.

[2] The dust particles must be large enough to ensure the starlight can push it, but not so large that it simply sinks. Too small and the starlight would effectively pass through the dust; too large and the dust would be too heavy to push. The dust the team observed about VY Canis Majoris was precisely the right size to be most effectively propelled outwards by the starlight.

[3] The explosion will be soon by astronomical standards, but there is no cause for alarm, as this dramatic event is not likely for hundreds of thousands of years. It will be spectacular as seen from Earth -- perhaps as bright as the Moon -- but not a hazard to life here.

This research was presented in a paper entitled "Large dust grains in the wind of VY Canis Majoris", by P. Scicluna et al., to appear in the journal Astronomy & Astrophysics. Research paper - http://www.eso.org/public/archives/releases/sciencepapers/eso1546/eso1546a.pdf