An international team of astronomers, including Dr Simon Vaughan from the University of Leicester's Department of Physics and Astronomy, has discovered a previously unknown link between the way young stars grow and the way black holes and other exotic space objects feed from their surroundings.

An accretion disc around a black hole. 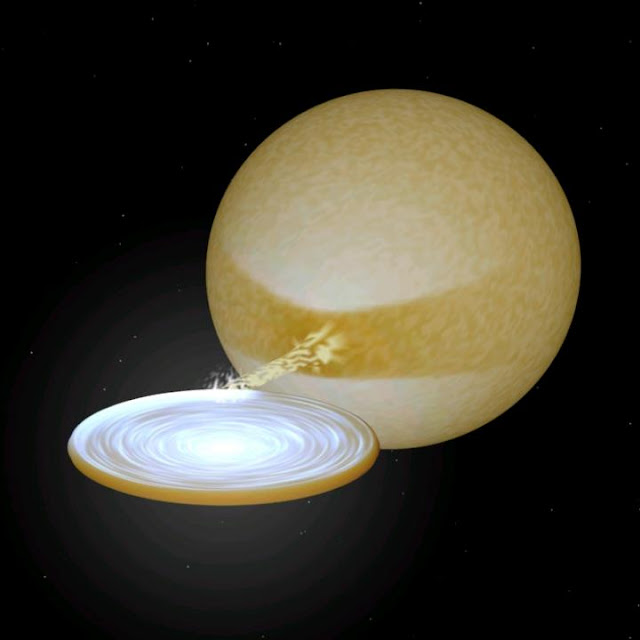 The study, 'Accretion-induced variability links young stellar objects, white dwarfs, and black holes', which is published in the journal Science Advances, shows how the 'flickering' in the visible brightness of young stellar objects (YSOs) - very young stars in the final stages of formation - is similar to the flickering seen from black holes or white dwarfs as they violently pull matter from their surroundings in a process known as accretion.

The study found a relationship between the size of the central object and the speed of the flickering produced by the disc, suggesting the physics of the accretion must be very similar around these different astronomical objects despite them being completely different in other ways, such as size, age, temperature and gravity. 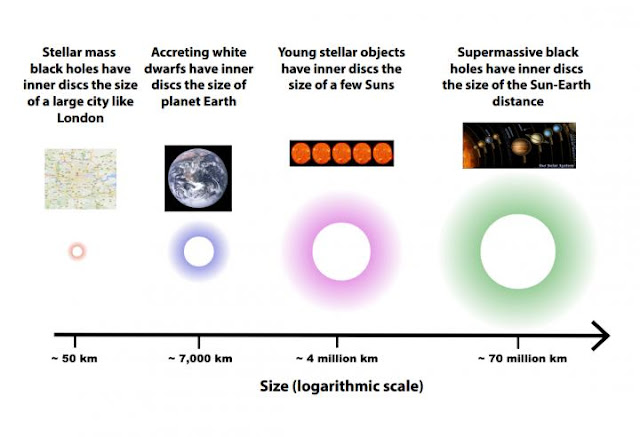 Dr Simon Vaughan, Reader in Observational Astronomy at the University of Leicester's Department of Physics and Astronomy, explained: "The seemingly random fluctuations we see from the black holes and white dwarfs look remarkably similar to those from the young stellar objects - it is only the tempo that changes."

Accretion discs are responsible for the growth and evolution of most celestial objects, from young protostars still in the star forming process to ancient supermassive black holes at the centre of galaxies.

NASA's Kepler/K2 telescope can 'listen' to the seemingly random brightness variations produced by accretion discs, revealing how they all sound the same once scaled by their physical size.

Accretion therefore is a universal process operating in the same way across all astrophysical objects.

The study was led by Simone Scaringi, a Humboldt Research Fellow at the Max Planck Institute for Extraterrestrial Physics in Garching, Germany.

Citation:  'Accretion-induced variability links young stellar objects, white dwarfs, and black holes', which is published in the journal Science Advances, is available at: http://advances.sciencemag.org/content/1/9/e1500686
on October 13, 2015