How small can a droplet shrink and remain a liquid?

This existential question has been raised by a series of experiments conducted recently at the Large Hadron Collider and the Relativistic Heavy Ion Collider that smash various atomic particles together at nearly the speed of light in order to create tiny drops of primordial soup: the quark-gluon plasma (QGP) that cosmologists are convinced dominated the universe microseconds after the Big Bang before the universe cooled down enough for atoms to form. In fact, the flow characteristic of these droplets is a major topic at a scientific conference, Quark Matter 2015, taking place this week in Kobe, Japan.

This is a diagram of a proton-lead collision in the Large Hadron Collider that produced a drop of quark-gluon plasma about one-tenth the size of those produced in previous experiments. 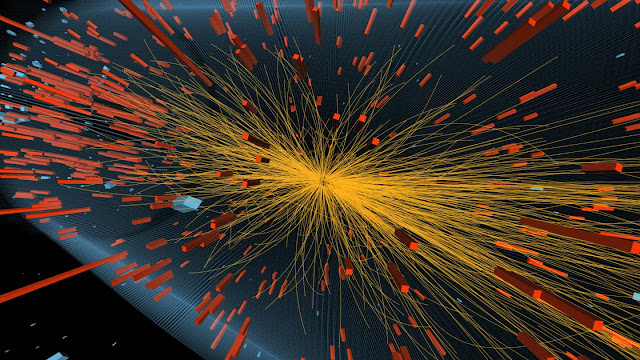 As part of the Large Hadron Collider's CMS detector team, Professor of Physics Julia Velkovska, post-doctoral fellow Shenguan Tuo and assistant research professor Shengli Huang at Vanderbilt University have been at the middle of these discoveries.

In 2010, the LHC successfully created sub-atomic blobs of QGP by colliding lead ions together. Smashing these two massive ions - each containing hundreds of protons and neutrons - had generated the tremendous temperatures, more than 250,000 times hotter than the core of the sun, that are required for the primordial state of matter to form.

(Unfortunately, the physicists don't have a direct way to measure the number of particles in the quark-gluon plasma, so they use the number of subatomic particles that are created when the plasma evaporates as a measure of their size.)

"Lead ions are very large, each containing hundreds of protons and neutrons. When you smash them together at very high speed, they generate blobs of plasma that produce thousands of particles when they cool down," said Velkovska. "But when the LHC switched to proton-lead ion collisions, we didn't think the collisions would contain enough energy to produce the plasma."

However, Tuo, as part of his doctoral thesis, made detailed measurements of the behavior of the particles produced by these smaller proton-lead collisions and discovered that they were in fact producing liquid droplets that were about one tenth the size of those produced in the lead-lead collisions.

"Everyone was surprised when we began finding evidence for liquid behavior," said Tuo. "It caused some very intense debates."

One of the key properties of a liquid is the ability to flow. Looked at from the point of view of the individual particles in a liquid, the ability to flow means that each particle is exerting an attractive force on its neighbors that is strong enough to effect their movement but not strong enough to lock them together like they are in a solid. So their movements are coordinated and, when released from a container, they retain information about the container's shape. Tuo's measurements showed that small numbers of particles produced in the proton-lead collisions originated on the ellipsoidal surfaces of small QGP droplets.

"These measurements confirmed that we were seeing this coherent behavior even in droplets producing as few as 100 to 200 particles," Tuo said. The results were published in Physical Review Letters in June. But that wasn't the end of the story.

The recreation of the quark gluon plasma (QGP) dates back to 2005. Velkovska and her Vanderbilt colleagues - physics professors Victoria Greene and Charlie Maguire - were members of the PHENIX science team at RHIC, located at Brookhaven National Laboratory, when they announced that they had created this new state of matter by colliding gold ions together at relativistic velocities. The big surprise was that this primordial material behaved like a liquid, rather than a gas.

To see what happened at even higher energies, the Vanderbilt group joined the CMS science team at the LHC located at the European Laboratory for Nuclear and Particle Physics in Geneva. The more powerful particle collider succeeded in duplicating the RHIC results, first as expected, by smashing lead ions together and then, unexpectedly, in the proton-lead collisions.

The proton-lead results prompted the scientists in the PHENIX team to re-analyze data that had been collected at RHIC in 2000, when the collider had smashed deuterium ions (proton-neutron pairs) and gold ions together at much lower energies than those in the LHC. The re-analysis, led by Shengli Huang, found that the proton-neutron pairs formed two hot spots in the gold ion when they collided which then merged into an elongated drop of QGP.

The RHIC researchers decided to test this further by adding a new run that collided helium ions (two protons and a neutron) with gold ions, and found that the same thing happened, except that three hot spots formed and merged into the QGP droplet. The results were just published in Physical Review Letters.

"Although the LHC collisions release 25 times more energy than the RHIC collisions, we don't see much difference in the droplet-formation process: Once you have reached the threshold, adding more energy doesn't seem to have much effect," said Velkovska. "I guess you can't get more perfect than perfect!"

Curiously, the phenomenon that most closely resembles the properties of the hottest known liquid is one of the coldest known liquids: lithium atoms that have been cooled to temperatures one-billionth of a degree above absolute zero using a device called a laser trap. When released from the trap these ultra-cold atoms also behave as a perfect liquid with near-zero viscosity.

"These are both strongly coupled systems. This appears to be an emergent property of such systems," Velkovska has concluded.