Cornell University researchers have developed a new lightweight and stretchable material with the consistency of memory foam that has potential for use in prosthetic body parts, artificial organs and soft robotics. The foam is unique because it can be formed and has connected pores that allow fluids to be pumped through it.

This is an artificial foam heart created by Rob Shepherd and his engineering team at Cornell University. 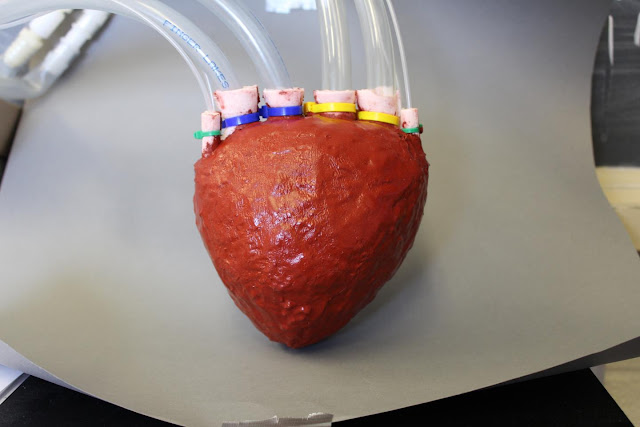 The polymer foam starts as a liquid that can be poured into a mold to create shapes, and because of the pathways for fluids, when air or liquid is pumped through it, the material moves and can change its length by 300 percent.

While applications for use inside the body require federal approval and testing, Cornell researchers are close to making prosthetic body parts with the so-called "elastomer foam."

"We are currently pretty far along for making a prosthetic hand this way," said Rob Shepherd, assistant professor of mechanical and aerospace engineering, and senior author of a paper appearing online and in an upcoming issue of the journal Advanced Materials. Benjamin Mac Murray, a graduate student in Shepherd's lab, is the paper's first author.

In the paper, the researchers demonstrated a pump they made into a heart, mimicking both shape and function.

a) Fluid pump as cast, b) fully assembled fluid pump after applying external inextensible shell, c) X-ray fluoroscope of the pump when the left chamber is uninflated (left) vs inflated (right), d) schematic of pump operation. 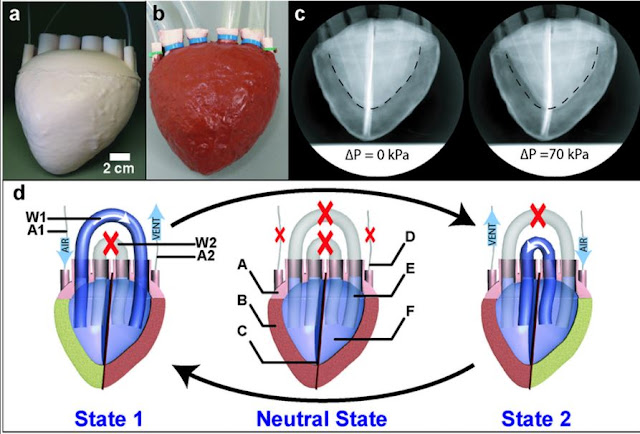 The researchers used carbon fiber and silicone on the outside to fashion a structure that expands at different rates on the surface - to make a spherical shape into an egg shape, for example, that would hold its form when inflated.

"This paper was about exploring the effect of porosity on the actuator, but now we would like to make the foam actuators faster and with higher strength, so we can apply more force. We are also focusing on biocompatibility," Shepherd said.