Scientists have catalogued nearly 2,000 exoplanets around stars near and far. While most of these are giant and inhospitable, improved techniques and spacecraft have uncovered increasingly smaller worlds. The day may soon come when astrophysicists announce our planet's twin around a distant star.

But size alone is insufficient to judge a globe. Though Earth and Venus are nearly identical in size, the latter's surface is hot enough to melt lead. Astronomers must gather information about an exoplanet's atmosphere, often through observing how the planet scatters or absorbs light from its parent star. But, that information is not always useful -- as is the case with the exoplanet GJ1214b.

This is an artistic depiction of the exoplanet GJ1214b. 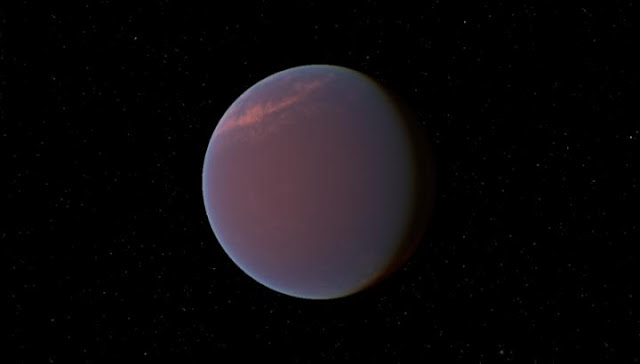 "When an exoplanet passes in front of its star, light can be absorbed at some wavelengths by molecules in the atmosphere, which we can analyze by looking at how light passes through the planet's atmosphere," said Benjamin Charnay, a postdoctoral researcher in the University of Washington Department of Astronomy. "But for this planet, when researchers previously looked with the Hubble Space Telescope, they saw almost no variation with wavelength of light."

This "flat spectrum" for GJ1214b indicated that something in the planet's upper atmosphere blocked light, keeping scientists in the dark regarding its atmosphere. Charnay decided to computationally model what its atmosphere could be, based on the planet's temperature and composition. In the process, as he reports in a new paper in Astrophysical Journal Letters, he and his collaborators became the first to simulate three-dimensional exotic clouds in the atmosphere of another world.

"It's an important step in characterizing exoplanets," said Charnay.

GJ1214b was among the first "mini-Neptune" exoplanets discovered, which are intermediate in size between Earth and Neptune. They're the smallest exoplanets that can be studied with existing technology, and GJ1412b is in an ideal position.

"Most of the other mini-Neptunes that have been discovered orbit stars between 100 and 1,000 light years away," said Charnay. "GJ1214b is quite close to Earth, just 42 light years away, and it orbits its star in just 1.6 days."

This is a size comparison of GJ1214b and Earth. 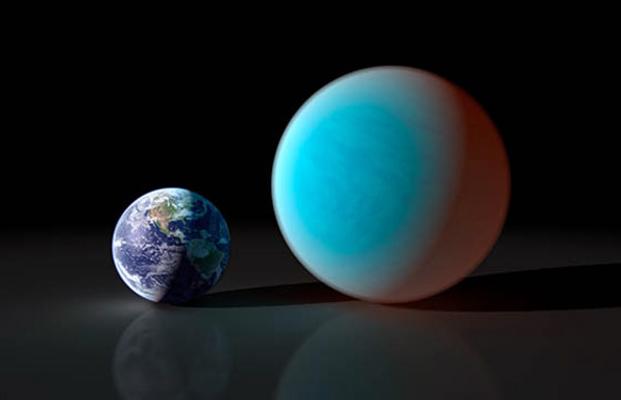 That fast orbit gave scientists the opportunity to record the exoplanet's flat spectrum, ruling out an atmosphere of simple hydrogen, water, carbon dioxide or methane. Instead, something high in the atmosphere was blocking light from penetrating farther down.

"There could either be high clouds in the atmosphere or an organic haze -- like we see on Titan," said Charnay.

Its atmospheric temperature exceeds the boiling point of water. As a result, if GJ1214b sported clouds, they would probably be some form of salt, said Charnay. But such clouds should form deep in the atmosphere, much lower than the altitude where they are observed. Charnay modeled how the clouds could form in the lower atmosphere and then rise into the upper atmosphere with sufficient circulation.

To accomplish this, Charnay, used a climate model developed by his former research group in Paris. He previously used this model for studying Titan and the early Earth, and adapted it for GJ1214b.

Charnay ran his three-dimensional cloud model on the UW's Hyak supercomputer. It shows how GJ1214b could create, sustain and lift salt clouds into the upper atmosphere, where they would contribute to the planet's flat spectrum that Hubble detected. His model also makes specific predictions about the effect these clouds will have on the planet's climate and the types of information that future telescopes, like the James Webb Space Telescope, will be able to gather.

Charnay would next like to model the other potential cause of the exoplanet's flat spectrum: photochemical haze, which gives Titan its shrouded orange atmosphere and Los Angeles its persistent dome of polluted air.

Charnay will have to wait until the James Webb Space Telescope launches later this decade to find out which theory -- clouds or haze -- gives GJ1214b a flat spectrum. In the meantime, in addition to his quest to simulate haze on this exoplanet, Charnay would like to model what the atmosphere was like on Earth before life evolved.

"Worlds like Titan and this exoplanet have complex atmospheric chemistry that might be closer to what early Earth's atmosphere was like," said Charnay. "We can learn a lot about how planetary atmospheres like ours form by looking at them."

Contacts and sources:
James Urton
University of Washington
on October 30, 2015