Before light travelled across it, the universe was a dark place. For about a billion years after the Big Bang, the cosmos was cloaked in a thick fog of hydrogen gas that kept light trapped. But as early stars began to form, hydrogen began to clear through a process called "reionization," letting light escape in all directions and turning the universe transparent.

This event played a central role in the formation of the universe as we know it. Now, using observations from the Hubble Space Telescope, astronomers led by École polytechnique fédérale de Lausanne (EPFL) have "looked back in time" by discovering over 250 of the earliest dwarf galaxies, and have also determined that these were vital to reionization. The work will be published in the Astrophysical Journal.

Reionization is a mystery in the scientific community. We do know that 400 million years after the Big Bang, the universe was still a very dark place. Protons and neutrons had combined into electrically charged, or ionized, atoms of hydrogen and helium. The ions began to attract electrons, and turned into electrically neutral atoms, creating a thick fog that kept light contained.

Artist's concept of the first stars in the Universe turning on. Wilkinson Microwave Anisotropy Probe (WMAP) data reveals that this era occurred 200 million years after the Big Bang, much earlier that many scientists had suspected. 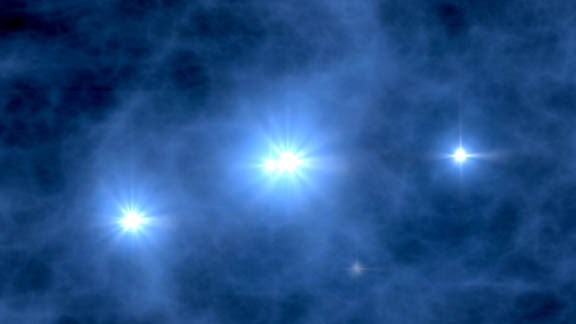 Credit: NASA/WMAP Science Team
Slowly, the first stars formed, likely 30-300 times bigger than our own Sun. Being young and huge, they burned bright and brief, exploding in supernovae. The energetic electromagnetic radiation (including ultraviolet light) they released reionized the neutral atoms of hydrogen, and the fog cleared, letting light could travel to the vast corners of the universe.

An international team of astronomers led by Hakim Atek at EPFL's Laboratory of Astrophysics, have discovered over 250 of the earliest galaxies, just 600-900 million years after the Big Bang. The researchers used observations by the Hubble Space Telescope to study the largest sample of the earliest dwarf, ultra-faint galaxies known.

But though powerful, the Hubble was not all. The scientists also exploited a cosmic phenomenon known as "gravitational lensing". Because space has been expanding since the Bing Bang, the oldest objects are further along the "outgoing" direction. Consequently, their light will also be very faint.

The team used closer galaxy clusters as a "magnifying lens" to observe older and more distant ones. Being super-massive, the galaxy clusters can bend spacetime. This forms a "gravitational lens" that can magnify the light from other galaxies hiding far behind the clusters.

The scientists studied images of three galaxy clusters taken as part of the Hubble Frontier Fields program, a three-year, 840-orbit programme that explores the most distant regions of space through gravitational lensing effects around six different galaxy clusters.

"Clusters in the Frontier Fields act as powerful natural telescopes and unveil for us these faint dwarf galaxies that would otherwise be invisible," says Jean-Paul Kneib, co-author of the study from EPFL.


This image shows the galaxy cluster MACSJ0717.5+3745, under study by the Hubble Frontier Fields program, which has produced the deepest images of gravitational lensing yet made

Some of the galaxies the team discovered formed just 600 million years after the Big Bang, according to Daniel Schaerer's distance determinations, from the University of Geneva. This makes them among the faintest of any other galaxy that Hubble has observed for this cosmic epoch. But the accumulated light that these dwarf galaxies emit because of their very large number, could have played a major role in reionization.

This video shows a zoom into the Hubble GOODS South Deep (GSD) field. Candidate extreme emission line galaxies are identified. This object was observed as part of the Hubble CANDELS Legacy Project. (no audio)

By observing the ultraviolet light from the galaxies found in this study the astronomers were able to calculate if these were in fact some of the galaxies involved in reionizing hydrogen. The team's analysis determined, for the first time with a degree of confidence, that the smallest and most abundant of the galaxies in the study were in fact vital in the universe-sculpting process. "The bright and massive galaxies alone are not enough to account for reionization," says Hakim Atek. "We need to take into account the contribution of a more abundant population of faint dwarf galaxies."

This diagram traces the evolution of the universe from the big bang to the present. Two watershed epochs are shown. Not long after the big bang, light from the first stars burned off a fog of cold hydrogen in a process called reionization. At a later epoch quasars, the black-hole-powered cores of active galaxies, pumped out enough ultraviolet light to reionize the primordial helium. 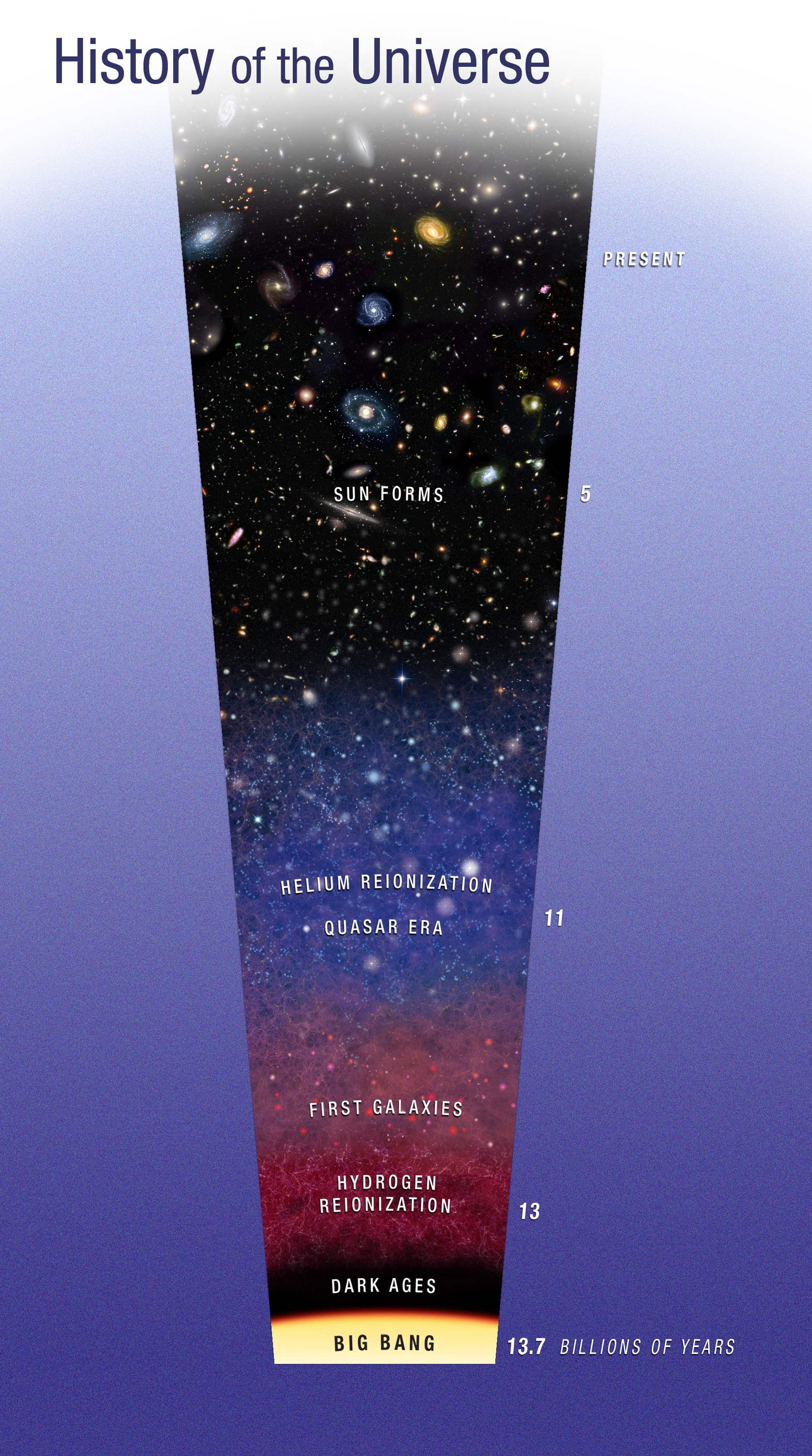 The study highlights the impressive possibilities of the Frontier Fields program. Scientists are currently working with Hubble images on another three galaxy clusters, and more exciting findings lie ahead. "Hubble remains unrivalled in its ability to observe the most distant galaxies and the sheer depth of the Hubble Frontier Field data guarantees very precise understanding of the cluster magnification effect, allowing us to make discoveries like these," says Mathilde Jauzac, a co-author of the study from Durham University and the University of KwaZulu-Natal.