On the floor of the grave lay the skeleton of an adult male, stretched out on his back. Weapons lay to his left, and jewelry to his right.

Near the head and chest was a bronze sword, its ivory hilt covered in gold. A gold-hilted dagger lay beneath it. Still more weapons were found by the man's legs and feet.

Gold cups rested on his chest and stomach, and near his neck was a perfectly preserved gold necklace with two pendants. By his right side and spread around his head were over one thousand beads of carnelian, amethyst, jasper, agate and gold. Nearby were four gold rings, and silver cups as well as bronze bowls, cups, jugs and basins.

The above describes what a University of Cincinnati-led international research team found this summer when excavating what was initially thought to be a Bronze Age house.

This gold ring with a Cretan bull-jumping scene was one of four solid-gold rings found in the tomb. This number is more than found with any other single burial elsewhere in Greece. 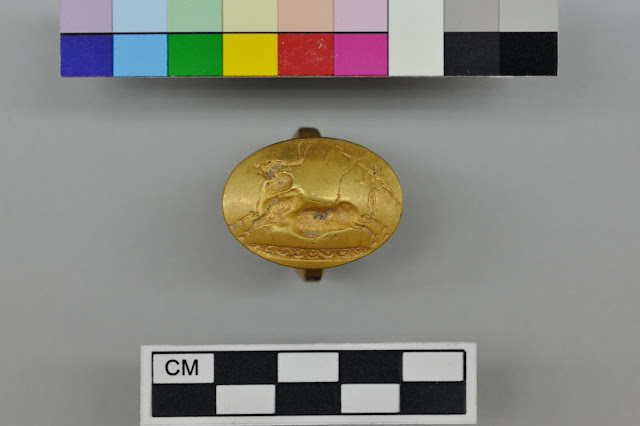 Instead, the team made a rich and rare discovery of an intact, Bronze Age warrior's tomb dating back to about 1500 B.C., and that discovery is featured in The New York Times, in an article titled: A Warrior's Grave at Pylos, Greece, Could Be a Gateway to Civilizations.

The find is so extraordinary that UC's Shari Stocker, senior research associate in the Department of Classics, McMicken College of Arts and Sciences, states: "This previously unopened shaft grave of a wealthy Mycenaean warrior, dating back 3,500 years, is one of the most magnificent displays of prehistoric wealth discovered in mainland Greece in the past 65 years."

Stocker co-leads the team that unearthed the undisturbed shaft tomb, along with Jack Davis, UC's Carl W. Blegen Chair in Greek Archaeology. Other team members include UC faculty, staff specialists and students, some of whom have worked in the area around the present-day city of Pylos on the southwest coast of Greece for the last quarter century as part of the Pylos Regional Archaeological Project. That UC-based effort is dedicated to uncovering the pre-history and history of the Bronze Age center known as the Palace of Nestor, an extensive complex and a site linked to Homeric legend. Though the palace was destroyed by fire sometime around 1200 B.C., it is nevertheless the best-preserved Bronze Age palace on the Greek mainland.

It was UC archaeologist Carl Blegen, along with Konstantinos Kourouniotis, director of the National Archaeological Museum, who initially uncovered the remains of the famed Palace of Nestor in an olive grove in 1939. Located near the present-day city of Pylos, the palace was a destination in Homer's "Odyssey," where sacrifices were said to be offered on its beaches. The king who ruled at the Palace of Nestor controlled a vast territory that was divided into more than 20 districts with capital towns and numerous small settlements.

Explains Stocker, "This latest find is not the grave of the legendary King Nestor, who headed a contingent of Greek forces at Troy in Homer's 'Iliad.' Nor is it the grave of his father, Neleus. This find may be even more important because the warrior pre-dates the time of Nestor and Neleus by, perhaps, 200 or 300 years. That means he was likely an important figure at a time when this part of Greece was being indelibly shaped by close contact with Crete, Europe's first advanced civilization."

Thus, the tomb may have held a powerful warrior or king - or even a trader or a raider - who died at about 30 to 35 years of age but who helped to lay the foundations of the Mycenaean culture that later flourished in the region.

Davis speculates, "Whoever he was, he seems to have been celebrated for his trading or fighting in nearby island of Crete and for his appreciation of the more-sophisticated and delicate are of the Minoan civilization (found on Crete), with which he was buried."

The team found the tomb while working in the area of the Palace of Nestor, seeking clues as to how the palace and its rulers came to control an area encompassing all of modern Messenia in western Greece and supporting more than 50,000 inhabitants during the Bronze Age.

Davis says that researchers were there to try and figure out how the Palace of Nestor became a center of power and when this rise in power began, questions they now think the tomb may help answer.

Given the magnitude of this find, it may be necessary to rethink when Plyos and the wider area around it began to flourish. It may have been earlier than previously thought since, somehow, whether via trade or force (e.g., raiding), its inhabitants had acquired the valuable objects found within the tomb.

Many of the tomb's objects were made in nearby Crete and show a strong Minoan style and technique unknown in mainland Greece in the 15th century BC.

The same would likely have been true of the warrior's dwelling during this lifetime. He would have lived on the hilltop citadel of nearby Englianos at a time when great mansions were first being built with walls of cut-stone blocks (vs. uncut rock and stones) in the style then associated with nearby Mediterranean Island of Crete and its Minoan culture, their walls decorated with paintings influenced by earlier Minoan wall paintings.

The weapons of bronze found within the tomb included a meter-long slashing sword with an ivory handle covered with gold.

WEALTH OF JEWELS AND WEAPONRY

A remarkable store of riches was deposited in the tomb with the warrior at the time of his death. The mere fact that the vessels in the tomb are of metal (vs. ceramic pottery) is a strong indication of his great wealth.

"It is truly amazing that no ceramic vessels were included among the grave gifts. All the cups, pitchers and basins we found were of metal: bronze, silver and gold. He clearly could afford to hold regular pots of ceramic in disdain," according to Stocker.

The weapons of bronze found within the tomb included a meter-long slashing sword with an ivory handle covered with gold. 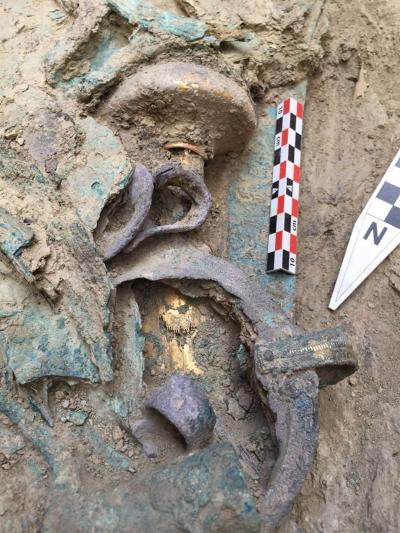 This member of the elite was accompanied in the afterlife by about 50 seal-stones carved with intricate Minoan designs of goddesses as well as depictions of bulls and human bull jumpers soaring over their horns. Four gold rings in the tomb contain fine Minoan carvings. A plaque of carved ivory with a representation of a griffon with huge wings lay between the man's legs. Nearby was a bronze mirror with an ivory handle. Archaeological conservator Alexandros Zokos was essential partner in the removal, cleaning and preservation of the finds from the grave.

The weapons of bronze within the tomb include a meter-long slashing sword with an ivory handle, several daggers, a spearhead, along with the already-mentioned sword and dagger with gold pommels.

Other grave gifts originally rested above the dead warrior atop a coffin of wood which later collapsed, spilling a crushing load of objects down on the skeleton - and making the job of excavation difficult and slow.

In combination with this weaponry, the discovery of so much jewelry with a male burial challenges the commonly held belief that these apparently "feminine" adornments and offerings accompanied only wealthy women to the hereafter.

What would eventually become the successful excavation of the tomb began on the team's very first day of its field work in May 2015, conducted in a previously unexplored field near the Palace of Nestor. They immediately found one of the four walls of the warrior's grave.

"We put a trench in this one spot because three stones were visible on the surface," says Davis, adding, "At first, we expected to find the remains of a house. We expected that this was the corner of a room of a house, but quickly realized that it was the tops of the walls of a stone-lined grave shaft."

In the end, the shaft measured about 5 feet deep, 4 feet wide and 8 feet long. It took the team about two weeks to clear the shaft before "we hit bronze," says Stocker. At that point, they realized they might have an exceptional prize: an undisturbed grave shaft, never stripped by looters. She explains, "The fact that we had not encountered any objects for almost a meter indicated that whatever was at the bottom had been sealed for a long time."

Stocker and Alison Fields, a UC graduate student of classics, did most of the actual excavation because their smaller size allowed them to work more easily and carefully around the tomb and its many precious objects.

UC's Sharon Stocker, left, and Jack Davis, right, have worked in the Pylos region of Greece for 25 years. They led a team of 45 archaeologists and experts in various specialties as well as students during this summer's excavations. Stocker stands in the shaft tomb the team uncovered. 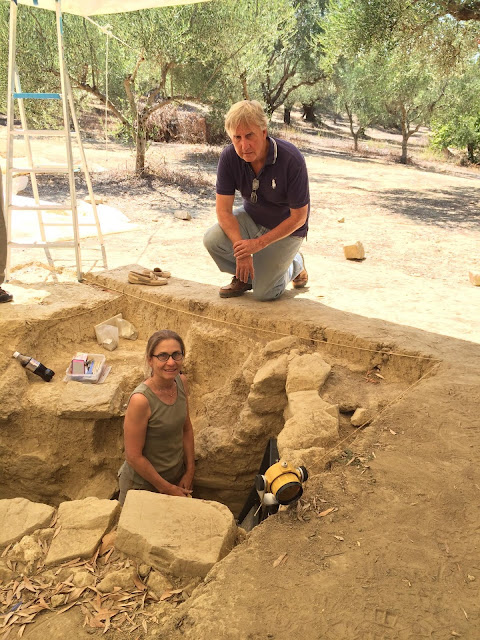 Both Stocker and Davis say it was good luck to discover this intact grave. Given the rarity of the find, it's unlikely to be repeated. "It's almost as if the occupant wants his story to be told," Davis says.

And that story will continue to unfold. The UC team and others are studying the artifacts in detail, with all artifacts remaining in Greece and their final disposition determined by the Greek Archaeological Service. Former UC anthropologist Lynne Schepartz, now of the University of Witwatersrand in Johannesburg, South Africa, will study the skeletal remains.

CATALOGUE OF OBJECTS FOUND WITHIN THE WARRIOR TOMB

Four complete solid-gold seal rings to be worn on a human finger. This number is more than found with any single burial elsewhere in Greece.

One three-foot long sword, with an ivory hilt overlaid with gold in a rare technique imitating embroidery (found at warrior's left chest).

Under this sword was a smaller dagger with a gold hilt employing the same technique.

Other bronze weapons by his legs and feet.

Bronze cups, bowls, amphora, jugs and a basin, some with gold, some with silver trim.

More than 50 seal stones, with intricate carvings in Minoan style showing goddesses, altars, reeds, lions and bulls, some with bull-jumpers soaring over the bull's horns - all in Minoan style and probably made in Crete.

Several pieces of carved ivory, one with a griffon with large wings and another depicting a lion attacking a griffon.

An astonishing hoard of over 1000 beads, most with drill holes for stringing together. The beads are of carnelian, amethyst, jasper and agate. Some beads appear to be decorations from a burial shroud of woven fabric, suggested by several square inches of cross woven threads which survived in the grave for 3,500 years.

Contacts and sources:
M.B. ReillyUniversity of Cincinnati
on October 26, 2015