Tracks of All Atlantic Tropical Cyclones from 1851-2005

Climate change plays a bigger part than thought in the rising economic cost of hurricanes in the USA, according to a new international study.

Professor Richard Tol, Professor of Economics at the University of Sussex, worked with colleagues in Amsterdam and Mexico City to reanalyse data on US hurricanes between 1900 and 2005.

Tracks of all Atlantic tropical cyclones from 1851-2005 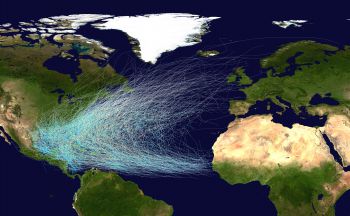 In a study published online in Nature Geoscience, they concluded that previous reports have overestimated the impact of socioeconomic factors - such as increases in wealth and population in coastal regions that are vulnerable to hurricanes – and have downplayed the role of global warming.

The authors estimate that US$2–14 billion of US hurricane losses incurred in 2005 alone may be attributable to climate change.

Professor Tol said "Statistical analysis is not the strongest skill among climate researchers. Sometimes this leads to an exaggeration of climate change and its impacts.

“Here, however, it appears that previous analyses, recently summarized in the Fifth Assessment Report of the Intergovernmental Panel on Climate Change, have exaggerated the impact of population and economic growth on hurricane damages. Re-analysing the data, we find that there is a residual trend that looks remarkably like the trend in temperature.”

Economic losses from natural disasters, and in particular hurricanes, have risen over the past decades. However, whether these increases are caused by socioeconomic factors or by an increase in extreme weather events has been contentious.

Using a statistical approach that minimised the risk of introducing artificial trends, the authors found that part of the trend cannot be explained by commonly used socioeconomic factors, but is consistent with an increase in the number and intensity of loss-generating cyclones that hit the US, possibly as a result of global warming.

Contacts and sources:
University of Sussex
on October 28, 2015