Stuffed Toy to be Modeled after “Disabled” Therapy Dog,

One-eyed, three-legged Angel, Houston’s Official Therapy Dog, will soon have a plush likeness. The toy is believed to be the first mass-produced stuffed animal with physical disabilities. The cloth dog is designed to accompany a book being written by Angel’s owner/trainer Trish Herrera. A miniature replica of Angel’s official therapy dog proclamation will be included in the package. Once manufacturing costs of the first batch are covered, Herrera plans to distribute the remaining toy dogs to hospitalized children free of charge. 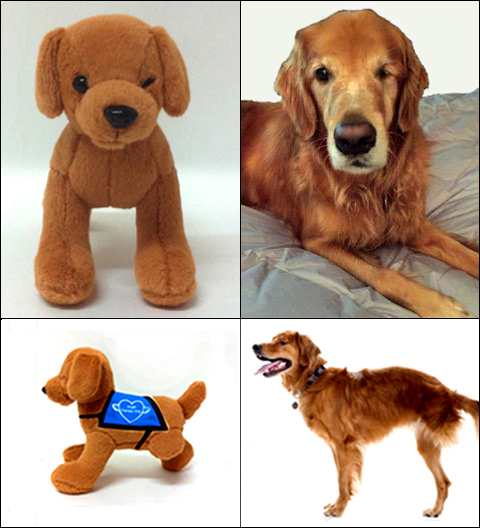 Angel is a six-year old female Golden Retriever. She was born as an only puppy, an unusual occurrence for the breed, missing her right eye and left rear leg. Veterinarians told breeder Barbara Shapley to euthanize the pup. But, Shapley rejected the advice, determined to find the dog a home.

In Houston’s close-knit Golden Retriever rescue community, Herrera is something of a superstar. She founded Houston Golden Retriever Rescue, has fostered more than 25 Goldens herself, and has served as an adoption coordinator. Herrera even established a fund to help individuals taking in special needs animals. To Shapley, Trish seemed the ideal adopter for Angel. Although Herrera initially had reservations, the puppy ultimately moved in with her and another Golden, Rosie.

When Rosie died in the following year, Trish focused her energy on Angel, training her for therapy work. Angel quickly achieved the American Kennel Club (AKC) titles: AKC Puppy, AKC Canine Good Citizen, AKC Therapy Dog, and AKC Therapy Dog Advanced. She has 200 of the 400 hours needed for the AKC’s Therapy Dog Distinguished title, the highest ranking. She has also met the requirements to work as a Faithful Paws Therapy Dog.

As a working dog, Angel typically makes approximately three visits per week to hospitals and assisted care facilities, which adds up to more than 100 visits in a year’s time. Angel sometimes meets as many as 20 people in a day, spending from five to 30 minutes with an individual. On rounds, Angel and Herrera check with nurses on a ward to see if anyone has requested time with a therapy dog. They also knock on patients’ doors to ask.

Once inside a room, Angel might be requested to put her front legs on the bed so the patient can pet her. Often, she is invited to get into the bed and lie beside a patient. She visits with individuals in waiting rooms, in intensive care, in children’s oncology wards, hospice units, and other areas of the hospital, as well as with the residents of assisted care homes. When asked what Angel brings to patients that “whole” therapy pets do not, Herrera says that Angel is inspirational to those whose conditions seem impossible to overcome.

Angel was named the Official Therapy Dog of Houston in a ceremony that took place at City Hall in 2015. Mayor Annise Parker and City Councilman David Robinson presented her with a proclamation declaring May 18 Angel, the Therapy Dog Day. With this honor, Angel represents all of Houston’s therapy animals.

Herrera is understandably proud of her animal companion. She says,” Angel is a reminder to fight for the ones who are different, the ones who are weaker, the ones who look like throwaways, because they may just surprise you.” Interested in learning more about Angel, her book or her stuffed replica? Visit her Facebook page www.facebook.com/AngelOfficialTherapyDogHouston
on October 23, 2015