Rehearsing information immediately after being given it may be all you need to make it a permanent memory, a University of Sussex study suggests.

Dr Chis Bird and his team identified the brain areas whose pattern of activation matched significantly while watching a video and remembering that same video. 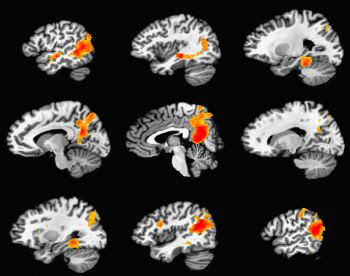 The findings, published on 27 October 2015 in the Journal of Neuroscience, have implications for any situation in which accurate recall of an event is critical, such as witnessing an accident or crime.

The study showed that the brain region known as the posterior cingulate – an area whose damage is often seen in those with Alzheimer’s – plays a crucial role in creating permanent memories.

This region not only helps us to recall the episodic details of an event but also integrates the memory into our knowledge and understanding, which makes it resistant to forgetting.

The study involved showing participants 26 short videos of clips taken from YouTube of around 40 seconds in length with a narrative element. For example, one called “nasty neighbours” depicted two men playing practical jokes on each other.

For 20 of the videos, the participants were given around 40 seconds after each video to relate either in their heads or out loud details of the video. For the remaining six videos, this rehearsal period was not given.

Up to two weeks later, participants were still able to recall many details of the videos they had rehearsed, whereas the non-rehearsed videos were largely forgotten.

MRI scans revealed that the same area of the brain – the posterior cingulate – was most associated with the benefits of rehearsal. Here, the degree to which brain activity matched when watching and rehearsing the videos predicted how well the videos were remembered a whole week later.

Lead researcher Dr Chris Bird said: “We know that recent memories are susceptible to being lost until a period of consolidation has elapsed. In this study we have shown that a brief period of rehearsal has a huge effect on our ability to remember complex, lifelike events over periods of 1-2 weeks.

“We have also linked this rehearsal effect to processing in a particular part of the brain – the posterior cingulate.

“The findings have implications for any situation where accurate recall of an event is critical, such as witnessing an accident or crime. Memory for the event will be significantly improved if the witness rehearses the sequence of events as soon as possible afterwards.”

Dr Bird’s research group is conducting new research to investigate how these processes relate to memory loss in Alzheimer’s disease.

Contacts and sources:
University of Sussex


Citation: ‘Consolidation of Complex Events via Reinstatement in Posterior Cingulate Cortex’, by Chris M Bird, James L Keidel, Leslie P Ing, Aidan J Horner and Neil Burgess, is published in the Journal of Neuroscience. The work is funded by the European Research Council, the Medical Research Council and the Wellcome Trust.