Phenomenally durable crystals called zircons are used to date some of the earliest and most dramatic cataclysms of the solar system. One is the super-duty collision that ejected material from Earth to form the moon roughly 50 million years after Earth formed. Another is the late heavy bombardment, a wave of impacts that may have created hellish surface conditions on the young Earth, about 4 billion years ago.

The deformed lunar zircon at center was brought from the moon by Apollo astronauts. The fractures characteristic of meteorite impact are not seen in most lunar zircons, so the ages they record probably reflect heating by molten rock, not impact. 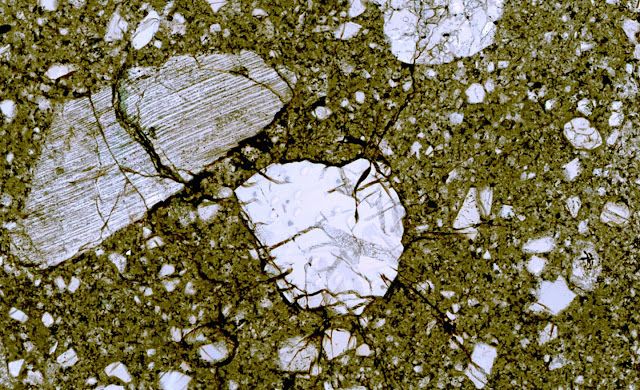 Both events are widely accepted but unproven, so geoscientists are eager for more details and better dates. Many of those dates come from zircons retrieved from the moon during NASA's Apollo voyages in the 1970s.

A study of zircons from a gigantic meteorite impact in South Africa, now online in the journal Geology, casts doubt on the methods used to date lunar impacts. The critical problem, says lead author Aaron Cavosie, a visiting professor of geoscience and member of the NASA Astrobiology Institute at the University of Wisconsin-Madison, is the fact that lunar zircons are "ex situ," meaning removed from the rock in which they formed, which deprives geoscientists of corroborating evidence of impact.

"While zircon is one of the best isotopic clocks for dating many geological processes," Cavosie says, "our results show that it is very challenging to use ex situ zircon to date a large impact of known age."

The "clock" in a zircon occurs as lead isotopes accumulate during radioactive decay of uranium. With precise measurements of isotopes scientists can calculate, based on the half life of uranium, how long lead has been accumulating.

This highly shocked zircon, from the Vredefort Dome in South Africa, shows thin, red bands that are a hallmark of meteorite impact. Uranium-lead dating from this zircon matched the age of the rocks exposed at Vredefort, not the more recent age of impact (2 billion years). 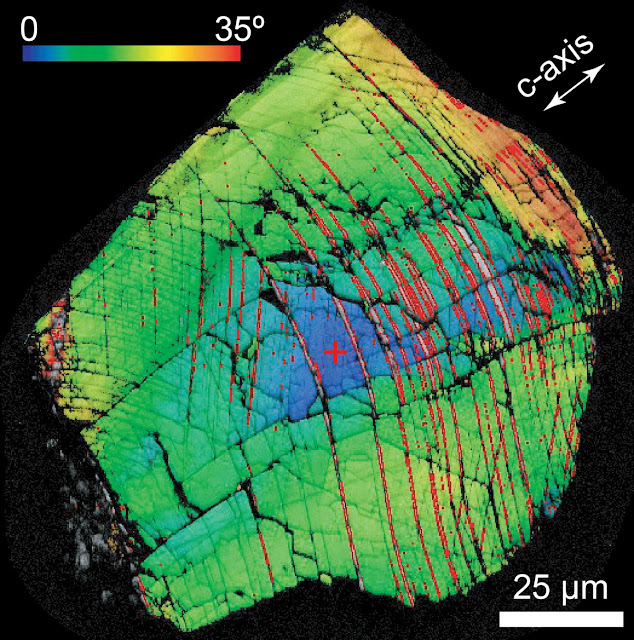 If all lead was driven off during asteroid impact, the clock was reset, and the amount of accumulated lead should record exactly how long ago the impact occurred.

Studies of lunar zircons have followed this procedure to produce dates from 4.3 billion to 3.9 billion years ago for the late heavy bombardment.

To evaluate the assumption of clock-resetting by impact, Cavosie and colleagues gathered zircons near Earth's largest impact, located in South Africa and known to have occurred 2 billion years ago. The Vredefort impact structure is deeply eroded, and approximately 90 kilometers across, says Cavosie, who is also in the Department of Applied Geology at Curtin University in Perth, Australia. "The original size, estimated at 300 kilometers diameter, is modeled to result from an impactor 14 kilometers in diameter," he says.

The researchers searched for features within the zircons that are considered evidence of impact, and concluded that most of the ages reflect when the zircons formed in magma. The zircons from South Africa are "out of place grains that contain definitive evidence of shock deformation from the Vredefort impact," Cavosie says. "However, most of the shocked grains do not record the age of the impact but rather the age of the rocks they formed in, which are about 1 billion years older."

The story is different on Earth, says zircon expert John Valley, a professor of geoscience at UW-Madison. "Most zircons on Earth are found in granite, and they formed in the same process that formed the granite. This has led people to assume that all the zircons were reset by impact, so the ages they get from the Moon are impact ages. Aaron is saying to know that, you have to apply strict criteria, and that's not what people have been doing."

The accuracy of zircon dating affects our view of Earth's early history. The poorly understood late heavy bombardment, for example, likely influenced when life arose, so dating the bombardment topped a priority list of the National Academy of Sciences for lunar studies. Did the giant craters on the moon form during a brief wave or a steady rain of impacts? "It would be nice to know which," Valley says.

"The question of what resets the zircon clock has always been very complicated. For a long time people have been saying if zircon is really involved in a major impact shock, its age will be reset, so you can date the impact. Aaron has been saying, 'Yes, sometimes, but often what people see as a reset age may not really be reset.' Zircons are the gift that keep on giving, and this will not change that, but we need to be a lot more careful in analyzing what that gift is telling us."