A team of astronomers is proposing that huge spiral patterns seen around some newborn stars, merely a few million years old (about one percent our sun's age), may be evidence for the presence of giant unseen planets. This idea not only opens the door to a new method of planet detection, but also could offer a look into the early formative years of planet birth.

A computer model reproduces the two-spiral-arm structure; the "x" is the location of a putative planet. The planet, which cannot be seen directly, probably excites the two spiral arms. 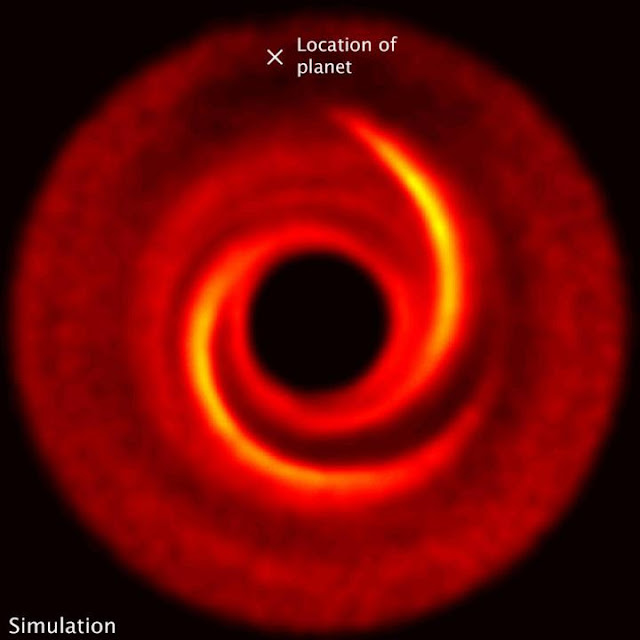 Though astronomers have cataloged thousands of planets orbiting other stars, the very earliest stages of planet formation are elusive because nascent planets are born and embedded inside vast, pancake-shaped disks of dust and gas encircling newborn stars, known as circumstellar disks.

The conclusion that planets may betray their presence by modifying circumstellar disks on large scales is based on detailed computer modeling of how gas-and-dust disks evolve around newborn stars, which was conducted by two NASA Hubble Fellows, Ruobing Dong of Lawrence Berkeley National Laboratory, and Zhaohuan Zhu of Princeton University. Their research was published in the Aug. 5 edition of The Astrophysical Journal Letters.

"It's difficult to see suspected planets inside a bright disk surrounding a young star. Based on this study, we are convinced that planets can gravitationally excite structures in the disk. So if you can identify features in a disk and convince yourself those features are created by an underlying planet that you cannot see, this would be a smoking gun of forming planets," Dong said.

Identifying large-scale features produced by planets offers another method of planet detection that is quite different from all other techniques presently used. This approach can help astronomers find currently-forming planets, and address when, how, and where planets form.

Gaps and rings seen in other circumstellar disks suggest invisible planets embedded in the disk. However gaps, presumably swept clean by a planet's gravity, often do not help show location of the planet. Also, because multiple planets together may open a single common gap, it's very challenging to estimate their number and masses.

Observations taken by the European Southern Observatory's Very Large Telescope show a protoplanetary disk around the young star MWC 758. The disk has two spiral arms that extend over 10 billion miles from the star. 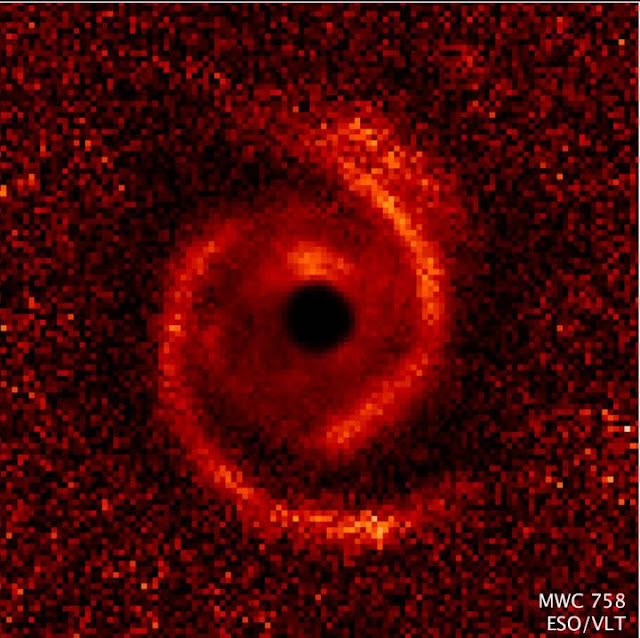 Ground-based telescopes have photographed two large-scale spiral arms around two young stars, SAO 206462 and MWC 758. A few other nearby stars also show smaller spiral-like features. "How they are created has been a big mystery until now. Scientists had a hard time explaining these features," Dong said. If the disks were very massive, they would have enough self-gravity to become unstable and set up wave-like patterns. But the disks around SAO 206462 and MWC 758 are probably just a few percent of the central star's mass and therefore are not gravitationally unstable.

The team generated computer simulations of the dynamics of a disk and how the star's radiation propagates through a disk with embedded planets. This modeling created spiral structures that very closely resemble observations. The mutual gravitational interaction between the disk and the planet creates regions where the density of gas and dust increases, like traffic backing up on a crowded expressway. The differential rotation of the disk around the star smears these over-dense regions into spiral waves. Although it had been speculated that planets can produce spiral arms, we now think we know how.

"Simulations also suggest that these spiral arms have rich information about the unseen planet, revealing not only its position but also its mass," Zhu said. The simulations show that if there were no planet present, the disk would look smooth. To make the grand-scale spiral arms seen in the SAO 206462 and MWC 758 systems, the unseen planet would have to be bulky, at least 10 times the mass of Jupiter, the largest planet in our solar system.

The first planet orbiting a normal star was identified in 1995. Thanks to ground-based telescopes and NASA's Kepler mission, a few thousand exoplanets have been cataloged to date. But because the planets are in mature systems, many millions or a few billion years old, they offer little direct clues as to how they formed.

"There are many theories about how planets form but very little work based on direct observational evidence confirming these theories," Dong said. "If you see signs of a planet in a disk right now, it tells you when, where, and how planets form."

Astronomers will use the upcoming NASA James Webb Space Telescope to probe circumstellar disks and look for features, as simulated by the modeling, and will then try to directly observe the predicted planet causing the density waves.