It seems that the more we see of Pluto, the more fascinating it gets. With its prominent heart-shaped feature, icy mountains, and “snakeskin” terrain, Pluto has already surprised New Horizons scientists with the variety and complexity of its surface features.

This image was taken by the Long Range Reconnaissance Imager (LORRI) on NASA's New Horizons spacecraft shortly before closest approach to Pluto on July 14, 2015; it resolves details as small as 270 yards (250 meters). The scene shown is about 130 miles (210 kilometers) across. The sun illuminates the scene from the left, and north is to the upper left. 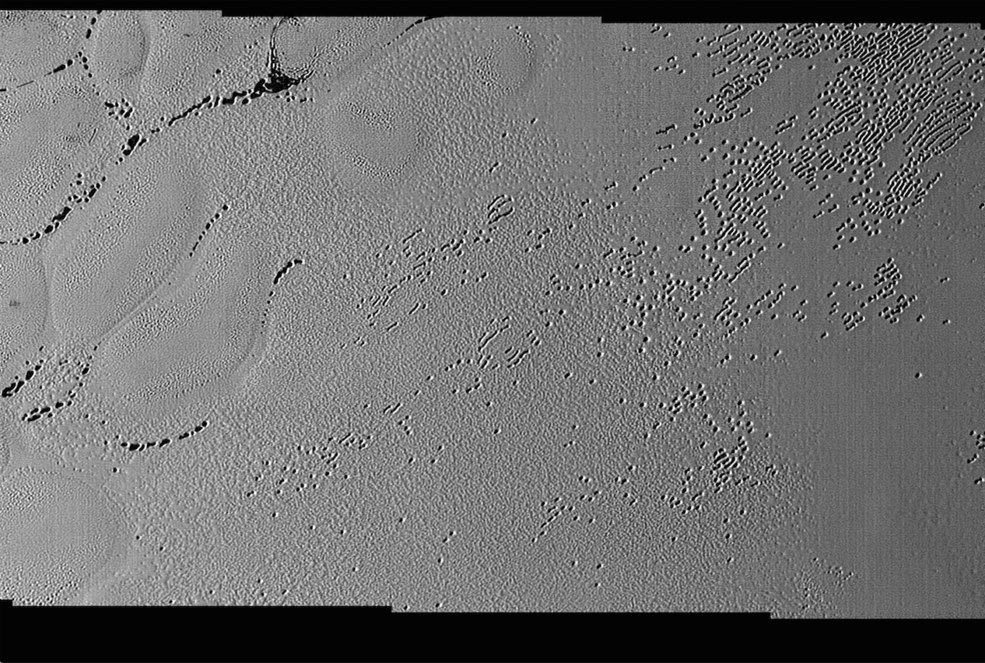 Now this latest image, from the heart of Pluto’s heart feature, show the plains’ enigmatic cellular pattern (at left) as well as unusual clusters of small pits and troughs (from lower left to upper right).

Scientists believe that this area, informally known as Sputnik Planum, is composed of volatile ices such as solid nitrogen. They theorize that the pits and troughs – typically hundreds of meters across and tens of meters deep – are possibly formed by sublimation or evaporation of these ices. However, the reasons for the striking shapes and alignments of these features are a mystery. Adding to the intrigue is that even at this resolution, no impact craters are seen, testifying to the extreme geologic youth of Sputnik Planum.

“Pluto is weird, in a good way,” said Hal Weaver, New Horizons project scientist with Johns Hopkins Applied Physics Laboratory in Laurel, Maryland. “The pits, and the way they’re aligned, provide clues about the ice flow and the exchange of volatiles between the surface and atmosphere, and the science team is working hard to understand what physical processes are at play here.”