NASA’s New Horizons spacecraft has returned the best color and the highest resolution images yet of Pluto’s largest moon, Charon – and these pictures show a surprisingly complex and violent history.

Charon in Enhanced Color NASA's New Horizons captured this high-resolution enhanced color view of Charon just before closest approach on July 14, 2015. The image combines blue, red and infrared images taken by the spacecraft’s Ralph/Multispectral Visual Imaging Camera (MVIC); the colors are processed to best highlight the variation of surface properties across Charon. Charon’s color palette is not as diverse as Pluto’s; most striking is the reddish north (top) polar region, informally named Mordor Macula. Charon is 754 miles (1,214 kilometers) across; this image resolves details as small as 1.8 miles (2.9 kilometers).

At half the diameter of Pluto, Charon is the largest satellite relative to its planet in the solar system. Many New Horizons scientists expected Charon to be a monotonous, crater-battered world; instead, they’re finding a landscape covered with mountains, canyons, landslides, surface-color variations and more.

“We thought the probability of seeing such interesting features on this satellite of a world at the far edge of our solar system was low,” said Ross Beyer, an affiliate of the New Horizons Geology, Geophysics and Imaging (GGI) team from the SETI Institute and NASA Ames Research Center in Mountain View, California, “but I couldn't be more delighted with what we see."

High-resolution images of Charon were taken by the Long Range Reconnaissance Imager on NASA’s New Horizons spacecraft, shortly before closest approach on July 14, 2015, and overlaid with enhanced color from the Ralph/Multispectral Visual Imaging Camera (MVIC). Charon’s cratered uplands at the top are broken by series of canyons, and replaced on the bottom by the rolling plains of the informally named Vulcan Planum. The scene covers Charon’s width of 754 miles (1,214 kilometers) and resolves details as small as 0.5 miles (0.8 kilometers). 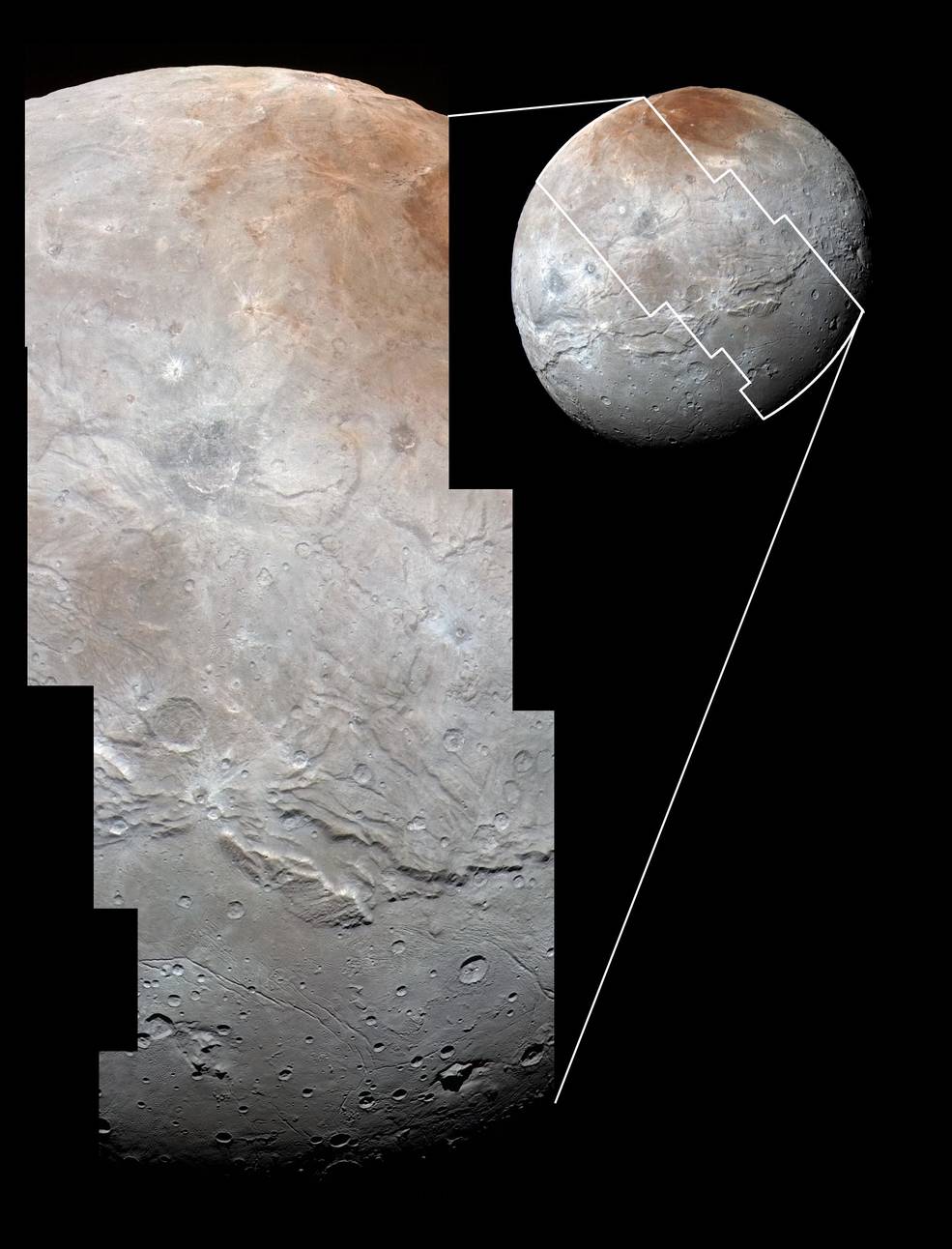 
High-resolution images of the Pluto-facing hemisphere of Charon, taken by New Horizons as the spacecraft sped through the Pluto system on July 14 and transmitted to Earth on Sept. 21, reveal details of a belt of fractures and canyons just north of the moon’s equator. This great canyon system stretches more than 1,000 miles (1,600 kilometers) across the entire face of Charon and likely around onto Charon’s far side. Four times as long as the Grand Canyon, and twice as deep in places, these faults and canyons indicate a titanic geological upheaval in Charon’s past.

“It looks like the entire crust of Charon has been split open,” said John Spencer, deputy lead for GGI at the Southwest Research Institute in Boulder, Colorado. “With respect to its size relative to Charon, this feature is much like the vast Valles Marineris canyon system on Mars.”

This composite of enhanced color images of Pluto (lower right) and Charon (upper left), was taken by NASA’s New Horizons spacecraft as it passed through the Pluto system on July 14, 2015. This image highlights the striking differences between Pluto and Charon. The color and brightness of both Pluto and Charon have been processed identically to allow direct comparison of their surface properties, and to highlight the similarity between Charon’s polar red terrain and Pluto’s equatorial red terrain. Pluto and Charon are shown with approximately correct relative sizes, but their true separation is not to scale. The image combines blue, red and infrared images taken by the spacecraft’s Ralph/Multispectral Visual Imaging Camera (MVIC). 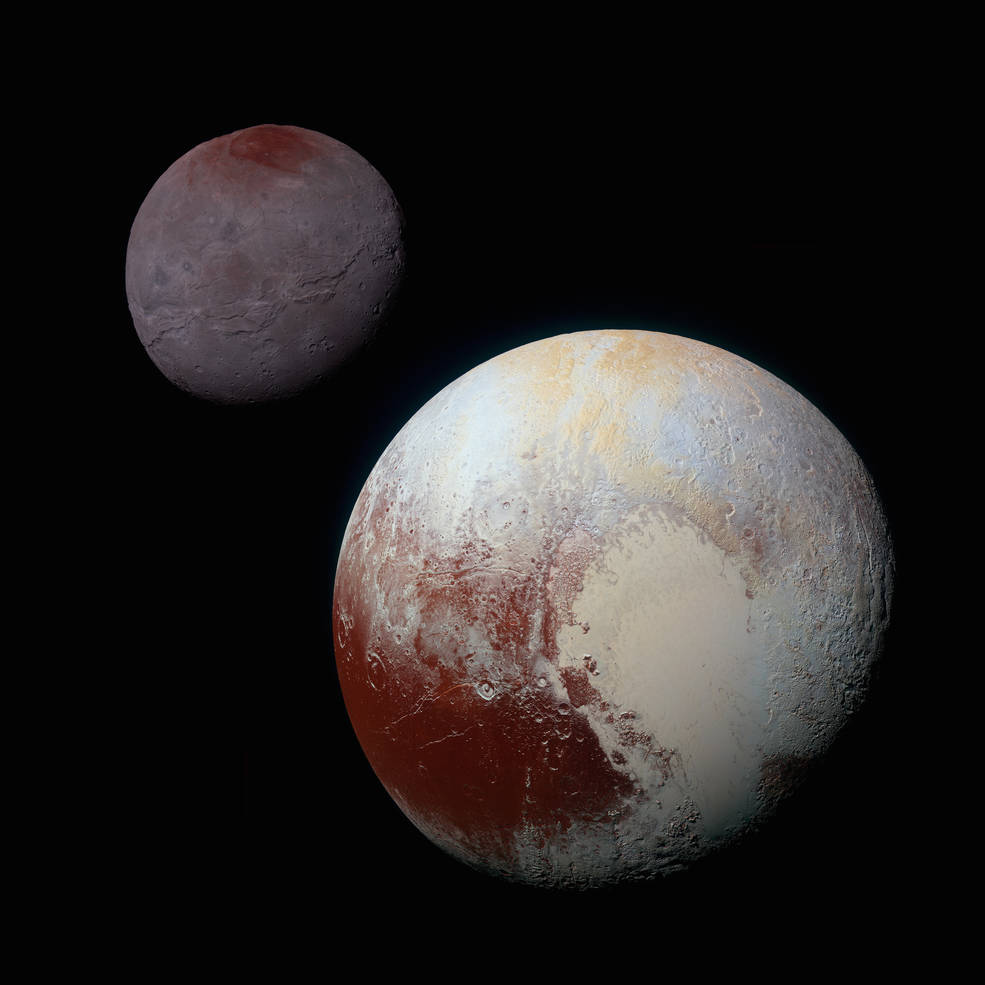 The team has also discovered that the plains south of the Charon’s canyon -- informally referred to as Vulcan Planum -- have fewer large craters than the regions to the north, indicating that they are noticeably younger. The smoothness of the plains, as well as their grooves and faint ridges, are clear signs of wide-scale resurfacing.

One possibility for the smooth surface is a kind of cold volcanic activity, called cryovolcanism. “The team is discussing the possibility that an internal water ocean could have frozen long ago, and the resulting volume change could have led to Charon cracking open, allowing water-based lavas to reach the surface at that time,” said Paul Schenk, a New Horizons team member from the Lunar and Planetary Institute in Houston.

Images from NASA's New Horizons spacecraft were used to create this flyover video of Pluto's largest moon, Charon. The “flight” starts with the informally named Mordor (dark) region near Charon’s north pole. The camera then moves south to a vast chasm, descending from 1,100 miles (1,800 kilometers) to just 40 miles (60 kilometers) above the surface to fly through the canyon system. From there it’s a turn to the south to view the plains and "moat mountain," informally named Kubrick Mons, a prominent peak surrounded by a topographic depression. New Horizons Long-Range Reconnaissance Imager (LORRI) photographs showing details at up to 400 meters per pixel were used to create the basemap for this animation. Those images, along with pictures taken from a slightly different vantage point by the spacecraft’s Ralph/ Multispectral Visible Imaging Camera (MVIC), were used to create a preliminary digital terrain (elevation) model. The images and model were combined and super-sampled to create this animation.

Even higher-resolution Charon images and composition data are still to come as New Horizons transmits data, stored on its digital recorders, over the next year – and as that happens, “I predict Charon’s story will become even more amazing!” said mission Project Scientist Hal Weaver, of the Johns Hopkins University Applied Physics Laboratory in Laurel, Maryland.

The New Horizons spacecraft is currently 3.1 billion miles (5 billion kilometers) from Earth, with all systems healthy and operating normally.