Observations led by astronomers at the University of Leeds have shown for the first time that a massive star, 25 times the mass of the Sun, is forming in a similar way to low-mass stars.

The discovery, made using a new state-of-the-art telescope called the Atacama Large Millimeter/submillimeter Array (ALMA), which is based in Chile, South America, is published online today by the Astrophysical Journal Letters.

An artist's impression of the disk around the forming high-mass star AFGL 4176. The disk is 50 times larger than the size of Pluto's orbit, but it rotates around its star in a similar way to disks around forming low-mass stars. 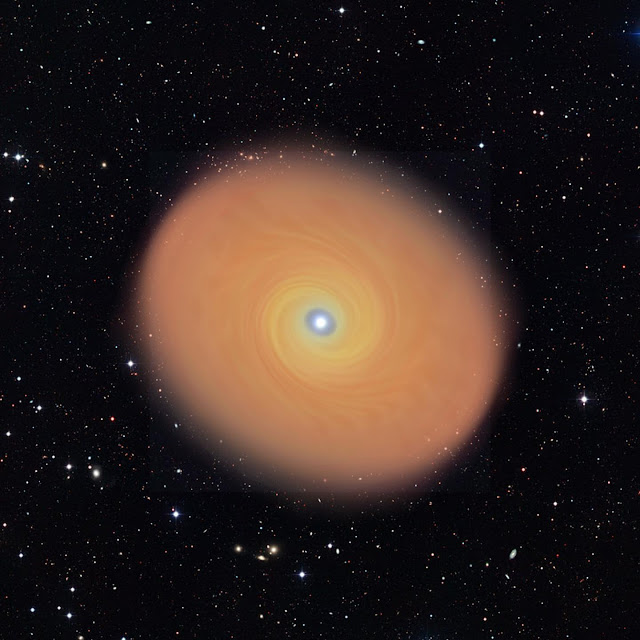 Lead author Dr Katharine Johnston, from the School of Physics and Astronomy at the University of Leeds, said: "Our groundbreaking observations show that not only does this still-forming massive star feed from a disk of material that surrounds it, like young Sun-like stars do, but it also mirrors low-mass star formation in the way the disk spins around the star.

"Without a disk to channel material onto the forming star in a thin and dense layer, energetic processes, such as stellar winds from these hot stars, would halt the material before it could reach the star. It's like when the wind stops you in your tracks on a windy day."

The research is one of the final pieces of the puzzle in understanding the lifetimes of the most massive and luminous stars, called O-type stars. These stars are major contributors to heavy element production in the Universe, such as iron and gold, which they eject into space in dramatic supernovae explosions at the end of their lives.

Bit by bit, evidence for massive stars forming in a similar way to low-mass stars has been growing. However, until now, rotating disks that look exactly like the ones around low-mass stars were only seen around B-type stars, which are less than 18 times the mass of the Sun.

Above a stellar mass of 18 solar masses, disks that looked like those around low-mass stars have been elusive. For those stars, astronomers often instead observed fluffy rotating structures that were hundreds of times bigger than low-mass disks and looked like gigantic rotating doughnuts rather than disks.

"We started to think that real disks may not actually exist around the most massive forming stars, and that those stars might have to form in a different way," said Dr Johnston. "Maybe the accretion into an O-type star was much more chaotic and dynamic than for the birth of our Sun.

"But our group took ALMA observations which show exactly what we were searching for all this time. We found a disk around an O-type star, which looks very similar to the disk that we think went on to form our Sun and the rest of the Solar System, except a gigantic scaled-up version of it. The disk we have found is at least 10 times larger and 100 times more massive than the disks that we usually see around young stars."

The discovery was a long time coming as massive stars form much more quickly than low mass stars, making it harder to catch one in its nascent years. Massive stars are also less abundant than low-mass stars, so you need to look much further into space for one. For instance Orion, our nearest massive star formation region, is almost ten times further away than the nearest observation of a young low-mass star with a disk still around it.

Professor Melvin Hoare, also from the University's School of Physics and Astronomy and a co-author of the study, said: "We needed better telescopes to resolve and peer further into the envelopes of gas that surround massive stars while they are forming. We needed a revolutionary telescope like ALMA.

"We now want to apply for more observing time with the ALMA telescope, this time with even better resolution, to see whether the disk is smooth or fragmenting into pieces that might form other stars or even planets."

Citation: "A Keplerian-like disk around the forming O-type star AFGL 4176", is published by the the Astrophysical Journal Letters on 29 October 2015.
on October 30, 2015