Most Vulnerable Regions to Ocean Acidification

New NOAA-led research maps the distribution of aragonite saturation state in both surface and subsurface waters of the global ocean and provides further evidence that ocean acidification is happening on a global scale. The study identifies the Arctic and Antarctic oceans, and the upwelling ocean waters off the west coasts of North America, South America and Africa as regions that are especially vulnerable to ocean acidification. 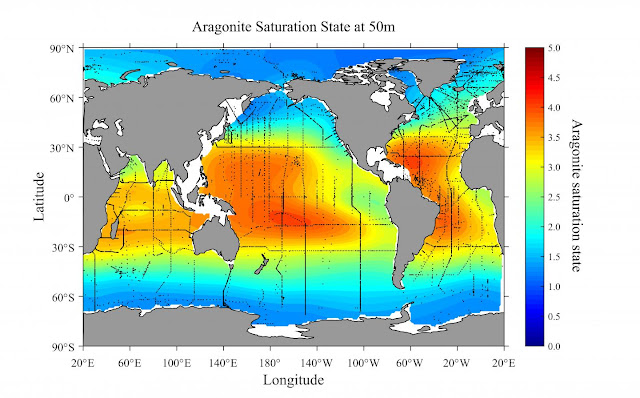 "These findings will help us better understand and develop strategies to adapt to the severity of ocean acidification in different marine ecosystems around the world," said Richard A. Feely, a NOAA oceanographer and co-author of the study, which has been accepted for publication and can be read online in the American Geophysical Union journal Global Biogeochemical Cycles.

Ocean acidification is caused by humankind's release of carbon dioxide emissions to the atmosphere. Excess carbon dioxide enters the ocean, reacts with water, decreases ocean pH and lowers carbonate ion concentrations, making waters more corrosive to marine species that need carbonate ions and dissolved calcium to build and maintain healthy shells and skeletons. The saturation state of seawater for a mineral such as aragonite is a measure of the potential for the mineral to form or to dissolve.

In the new study, scientists determined the saturation state of aragonite in order to map regions that are vulnerable to ocean acidification. Waters with higher aragonite saturation state tend to be better able to support shellfish, coral and other species that use this mineral to build and maintain their shells and other hard parts.

This study shows that aragonite saturation state in waters shallower than 328 feet or 100 meters depth decreased by an average of 0.4 percent per year from the decade spanning 1989-1998 to the decade spanning 1998-2010. "A decline in the saturation state of carbonate minerals, especially aragonite, is a good indicator of a rise in ocean acidification," said Li-Qing Jiang, an oceanographer with NOAA's Cooperative Institute for Climate and Satellites at the University of Maryland and lead author.

"When oyster larvae are born they must draw on the energy in their yolk to build their aragonite shells to protect themselves from predators and grow into healthy adults," said Feely. In waters depleted of carbonate ions, young oysters must expend more energy to build their shell and may not survive. This has significant consequences for the seafood industry."

For access to the data used in the study,  http://data.nodc.noaa.gov/geoportal/rest/find/document?searchText=%22GLODAP%22&f=searchPage