When researchers captured Eurasian reed warblers along the Russian coast during their spring migrations and flew them 1,000 kilometers east to Zvenigorod, the birds weren't fazed; they simply re-oriented themselves toward their original destination. Now, the researchers who first demonstrated the birds' navigational skill in the Cell Press journal Current Biology several years ago are back with new evidence that reed warblers rely on a geomagnetic map to point them in the right direction.

This is a photograph of the research setup with a scenic view of the dune at the Courish spit in the Baltic (the study site).

In fact, the researchers show in Current Biology on October 5 that the birds will respond as though they've been sent to Zvenigorod when they are captured and exposed to a geomagnetic field that matches that location.

"The most amazing part of our finding is that the same birds sitting on the same dune of Courish Spit on the Baltic coast shifted their orientation from their normal migratory direction--northeast--to the northwest after we slightly turned current control knobs on our power supplies," says Dmitry Kishkinev of Queen's University Belfast. "All the other sensory cues remained the same for the birds."

To test the role of magnetic fields, Kishkinev, together with Nikita Chernetsov at the Biological Station Rybachy and their colleagues, had a special magnetic coil system built that allowed them to create a homogeneous magnetic field out on their coastal field site, where it's very easy to catch migratory reed warblers. The system allowed them to manipulate the magnetic field without obscuring the birds' ability to pick up on other cues, including the sun, stars, landmarks, and scents.

This is a photograph of a Eurasian reed warbler. 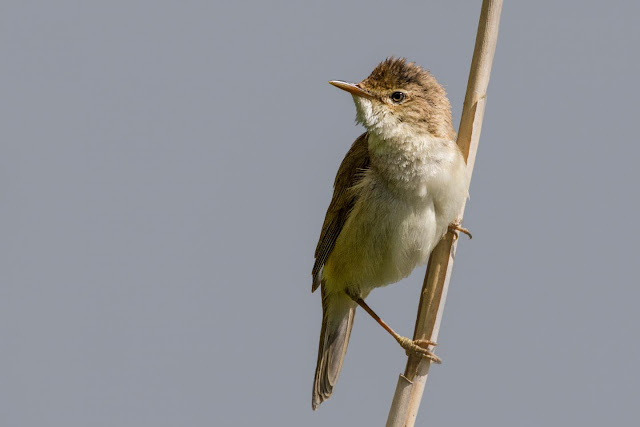 The birds were housed inside the magnetic coil system for several days. In that time, they were virtually displaced with a change in magnetic field only once to avoid confusion. The data show that this change in the magnetic parameters led the birds to re-orient toward their breeding destinations just as they would if they'd been physically displaced.

The researchers now suspect that reed warblers track changes in the geomagnetic parameters as they travel during their first fall migration--for example, from the Baltic down to West Africa--to establish certain "rules of thumb." Those rules then guide the birds on future migrations and make it possible for them to re-orient themselves if they find they've gotten off track.

The study provides some of the strongest evidence yet that at least some birds rely on a geomagnetic map for long-distance navigation, as spiny lobsters and sea turtles also do. Although the idea of magnetic navigation in birds was first proposed back in the 19th century, it has been a challenge to prove, the researchers say.

Further work is needed to understand how birds sense magnetic fields and which portions of the magnetic field are most important to them. The researchers are also curious to know whether reed warblers rely on their sense of smell, as some seabirds and homing pigeons do.