When the largest modern-day plant-eaters -- elephants -- are confined to too small an area, they devastate the vegetation. So 15,000 years ago, when the herbivores like the Columbian mammoth, mastodons and giant ground sloths were even larger, more numerous and more widely distributed, how did the landscape survive?

A pack of saber-tooth cats (Smilodon) fight with adult Colombian mammoths over a juvenile mammoth they've felled. A new analysis by a team of biologists concludes that 'hypercarnivores' such as these working in concert could have taken down juveniles of the largest herbivores. 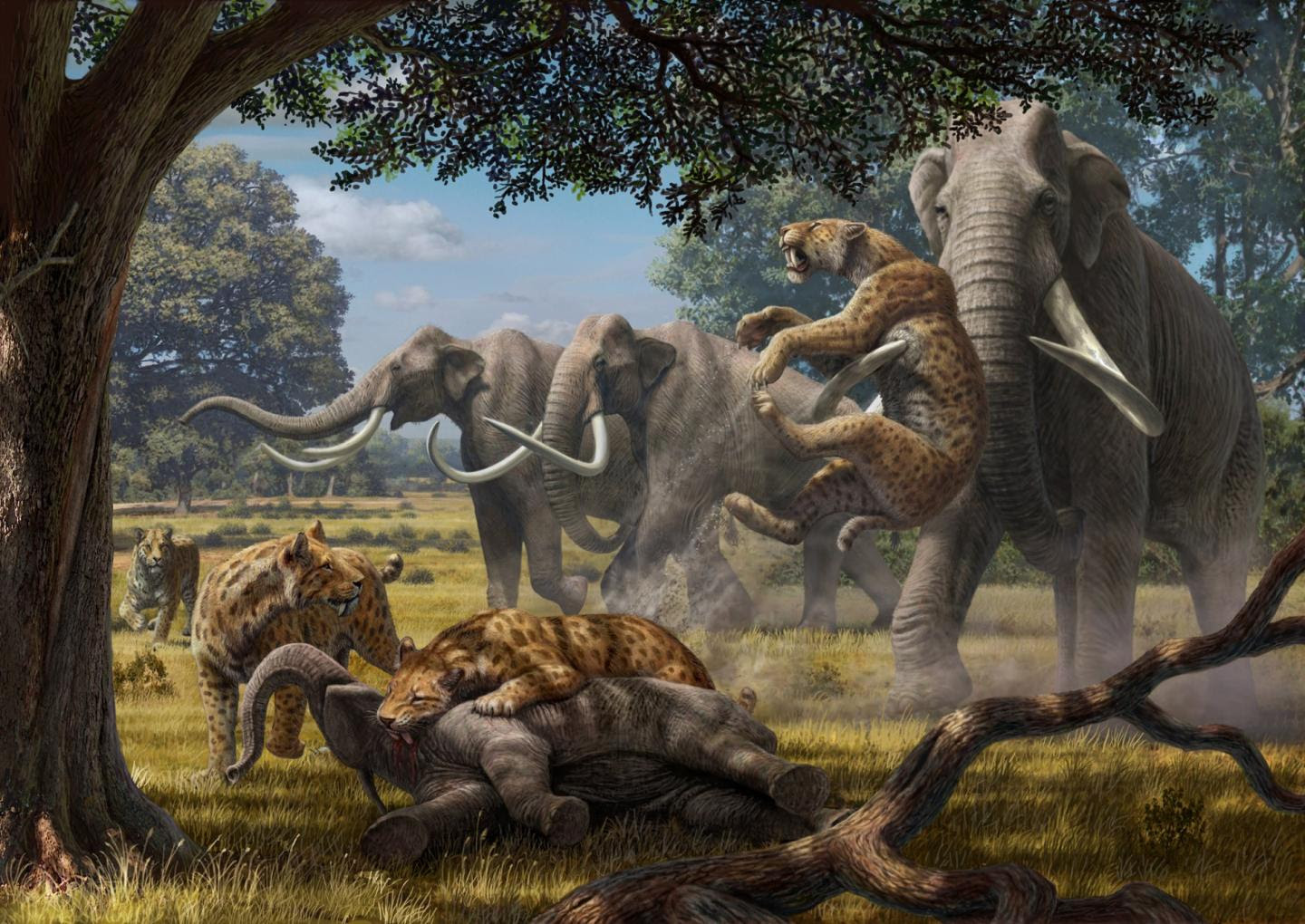 The answer was probably enormous predators, creatures called "hypercarnivores" by a team of evolutionary biologists appearing online the week of Oct. 26 in the Proceedings of the National Academy of Sciences.

These ancient carnivores would have been about twice as large as the wolves, lions and hyenas we know today.

Based on a series of mathematical models for the sizes of predators and prey in the late Pleistocene age (about 1 million to 11,000 years ago), the team concludes that the largest cave hyena might have been able to take down a 5-year-old juvenile mastodon weighing more than a ton. Hunting in packs, those hyenas could possibly bring down a 9-year-old mastodon weighing two tons, the authors conclude.

"From the present day, it seems that big animals like elephants are immune to predation," said Duke University biologist V. Louise Roth. "In fact, Pleistocene ecosystems were a lot more complex and predators could have had a larger impact."

It's also true that humans have picked off most of the larger predators, changing our estimates pretty dramatically, said lead author and UCLA paleoecologist Blaire Van Valkenburgh. "So much of our science is based on the last 50 or 100 years," she said, but populations of big cats and wolves would have been much larger before humans arrived on the scene.

The work grows out of a 2014 symposium on the consequences of megafauna extinctions in the Pleistocene. Most of the discussion at the conference in Oxford was on herbivores, Van Valkenburgh said.

Saber-tooth cats (Smilodon) working together may have been capable of taking down juveniles of the largest Pleistocene herbivores, such as this young hippo, according to a new analysis appearing in the Proceedings of the National Academy of Sciences. 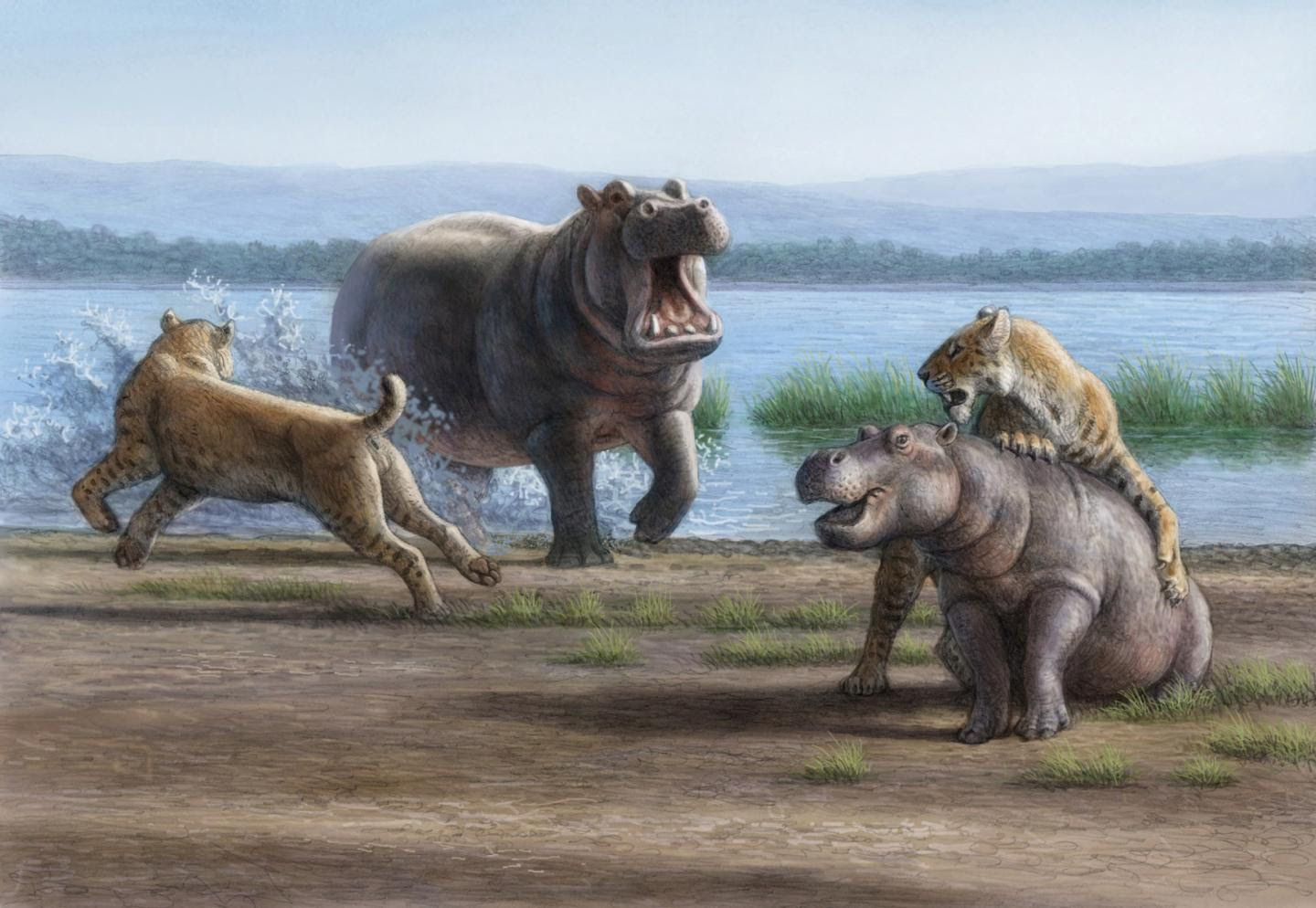 "I'm a carnivore person," so she wanted to make sure the superpredators had a seat at the table, too. "We're all just trying to understand the Pleistocene and how rich that ecosystem was," Van Valkenburgh said.

Van Valkenburgh's analysis estimated size ranges for Pleistocene predators based on the fossil record, including teeth. Well-established formulas allow researchers to make a reasonable estimate of an animal's size based on just the first molar. "And in the fossil record, the one thing we've got a lot of is teeth," she said.

This led to the question of how large their prey could have been. "Blaire came to me with the question, 'How big was a baby mastodon?'" Roth said.

She developed formulas for the relationship of shoulder height to body mass from data published for modern captive elephants to estimate how large some of the herbivores found in fossil evidence would have been.

"It's hard to weigh an elephant; you need a truck scale," Roth said. And truck scales aren't the easiest thing to lug around the African savannah, so field researchers monitor shoulder heights in tracing a growing elephant's size.

The difficulty is that, even with the best measurements, modern adult elephants with the same shoulder height may vary by as much as two times in body mass, Roth said. Add to that the "age structure," the mix of animals of different sizes in a given herd, and her calculations of mammoth sizes cover "a whopping range."

Nonetheless, they developed a range for what some of these shaggy grass-eaters would weigh. From this, an analysis by Matthew Hayward of Bangor University, UK calculated whether these big predators might be able to capture an herbivore.

Because there is no way to infer from the scant fossil evidence whether predators hunted in packs, the researchers relied on estimated prey sizes and modeled the capacity of single predators and predators in groups to take them down.

They conclude that juvenile mastodons and mammoths would indeed have been susceptible, especially if the carnivores were socially organized.

Juvenile elephants do fall prey to lions in contemporary Africa, the study notes, but it usually involves a coordinated attack by a group of carnivores. "In Botswana, lions were observed to regularly use a strategy in which one to two lions leapt onto and bit the back of the victim while others on the ground worked to sever the relatively thin flexor muscles of the hind limb," the study says.

Hunting in packs -- as modern lions, hyenas and wolves still do -- would have made even larger juveniles susceptible. Van Valkenburgh said that larger pack sizes, which may have been more common in the Pleistocene, further enhance hunting success.

Understanding the dynamics of predator, prey and grassland before humans were added to the mix is essential to properly guiding efforts to restore habitats, Roth said. "You can't just make assumptions based on what we see today. The best way to understand community dynamics absent human influences is to look to the natural experiments in the fossil record."