The MODIS instrument aboard NASA's Aqua satellite captured this visible image of Hurricane Patricia on Oct. 23 at 20:35 UTC (4:35 p.m. EDT), just three hours before it made landfall in southwestern Mexico. 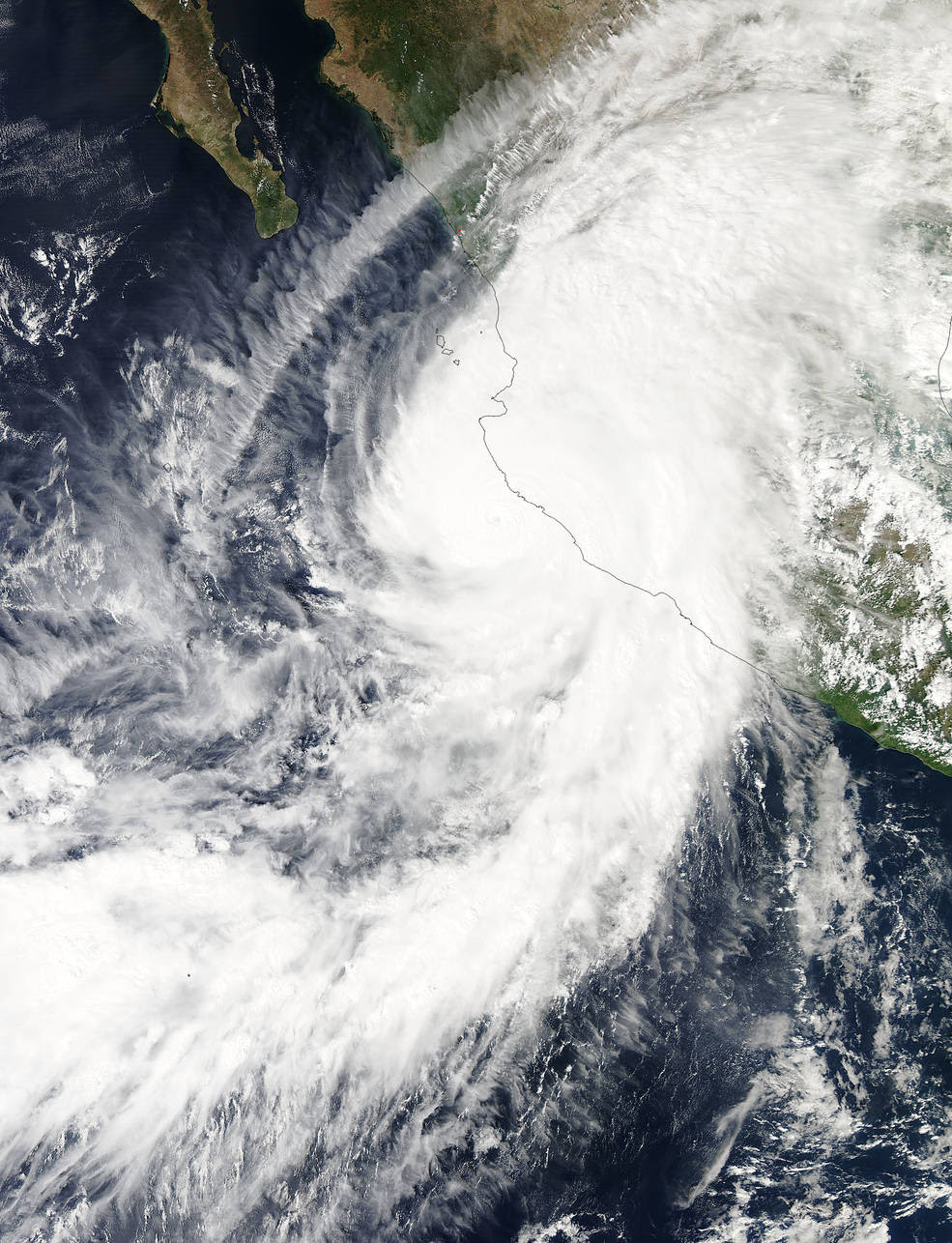 
Satellite imagery and surface observations on October 24 at 11 a.m. EDT indicated that the mid- to upper-level center is located northeast of the center of circulation at the surface. In addition, there is little organized convection (developing thunderstorms) associated with the cyclone.


Landfall as a Category 5 Hurricane
Satellite images indicated that the center of the eye of Patricia made landfall at approximately 7:15 p.m. EDT/6:15 p.m. CDT/2315 UTC on Friday, October 23 along the coast of southwestern Mexico near Cuixmal. It was 55 miles (85 km) west-northwest of Manzanillo, Mexico. That was also about 55 miles (85 km) west-northwest of Manzanillo, Mexico. The maximum winds were estimated to be 165 mph (270 kph) at the time of landfall. That means the sustained winds had dropped by 35 mph from 200 mph just before landfall. Regardless, Patricia was still a Category 5 hurricane on the Saffir-Simpson Wind Scale at landfall.


Adding Up Patricia's Heavy Rainfall from Space
Data from NASA's Integrated Multi-satellitE Retrievals for GPM (IMERG) were used to estimate the amount of rain that fell during the short time period when hurricane Patricia explosively developed and circled back to hit Mexico. This analysis included data collected from October 20-24, 2015 and showed rainfall for the East Pacific, Mexico and the surrounding region. This preliminary rainfall total analysis showed that by early October 24, the heaviest rain from Patricia fell over the open waters of the Eastern Pacific. Rainfall totals there were found to be over 409 mm (16.1 inches). Rain totals of over 203 mm (8 inches) were located where Patricia made landfall.

Adding up Hurricane Patricia's Rainfall from Space (Oct 20-24) NASA/JAXA's GPM data showed Patricia's highest rainfall totals over 409 mm (16.1 inches) from Oct. 20-24. Rain totals of over 203 mm (8 inches) were located where Patricia made landfall. During that time, GPM saw a larger rainfall (not associated with Patricia) in the Gulf of Mexico where over 507 mm (almost 20 inches) of rain fell.

An even rainfall greater total, that was not associated with Patricia, was located in the Gulf Of Mexico where over 507 mm (almost 20 inches) of rain fell during this short period.

GPM is a joint mission between NASA and the Japanese space agency JAXA.

Location and Statistics on Saturday, October 24

According to the National Hurricane Center, at 11 a.m. EDT (1500 UTC) on Saturday, October 24, the center of Tropical Depression Patricia was located near latitude 23.9 North, longitude 101.6 West. That's about 95 miles (155 km) northeast of Zacatecas, Mexico. Maximum sustained winds had decreased to near 35 mph (55 kph) with higher gusts.

This image of Patricia was taken at landfall, 7:15 p.m. EDT from NOAA's GOES-West satellite. 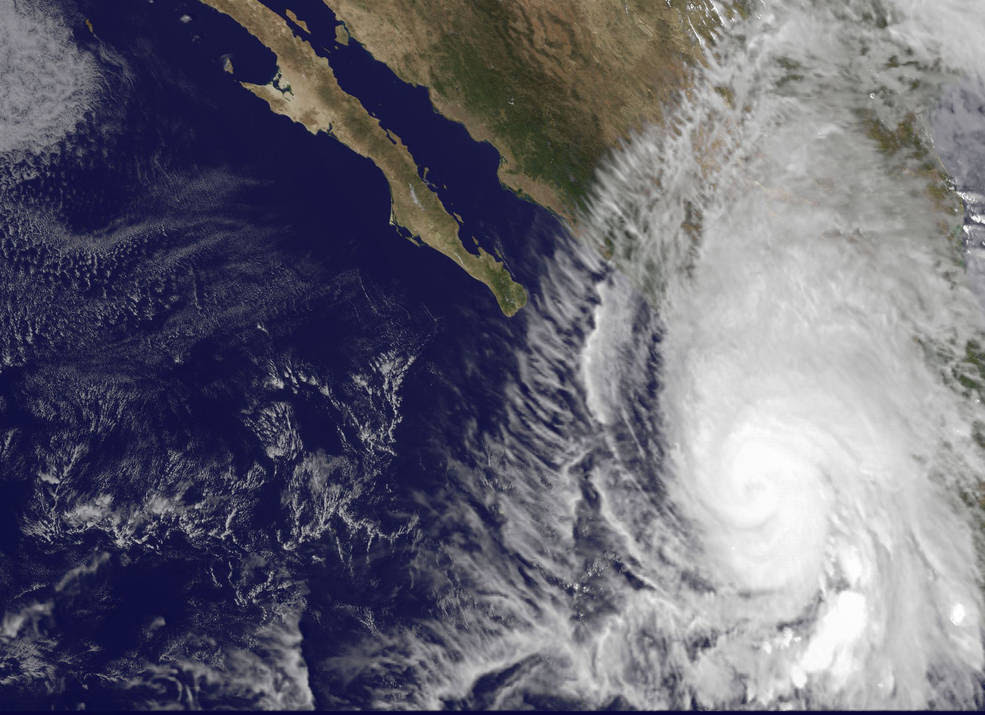 The depression was moving toward the northeast near 24 mph (39 kph) and this motion is expected to continue through tonight, October 24. On the forecast track, the center of Patricia is forecast to move across central and northeastern Mexico on Saturday, October 24. The estimated minimum central pressure is 1002 millibars.


How Patricia Made History

"Hurricane Patricia made history early Friday morning, October 23 when it became the strongest storm ever recorded in the Western Hemisphere with maximum sustained winds reported at 200 mph by the National Hurricane Center (NHC) at 4:00 a.m. CDT (5 a.m. EDT) October 23, based on Hurricane Hunter aircraft measurements collected in the eye of the storm," Lang said.

Not only is Patricia historic in terms of its overall intensity, it is also one of the fastest strengthening storms on record. At 4 a.m. CDT on the morning of Thursday October 22, Patricia was a run-of-the-mill Category 1 hurricane with a minimum central pressure of 980 millibars and maximum sustained winds of 85 mph. Twenty-four hours later at 4 a.m. CDT on the October 23, after undergoing what is known as a rapid intensification cycle, the pressure had fallen 100 millibars to 880 millibars, and the peak sustained winds had increased by 115 mph to 200 mph. This rate of wind intensification supercedes the previous record rate in the eastern Pacific of ~100 mph (85 knots) in 24 hours set by Hurricane Linda back in 1997, which was until Patricia the strongest hurricane on record in the East Pacific, and Wilma's increase of 105 mph in 24 hours in the western Caribbean. Patricia's 100 millibars pressure fall in 24 hours well exceeds Linda's 81 millibars in 24 hours and just exceeds Hurricane Wilma's 97 millibar fall in 24 hours."

Lang said that the current 2015 El Nino is setting up to be one of the strongest on record. As a result, sea surface temperatures are well above average over a vast area of the equatorial East Pacific. However, El Nino is not the only story. For about the past two years, "the Blob" has also been lurking along the West Coast of North America. This large mass of above-normal sea surface temperatures extends from the Bering Sea all the way down to the Pacific Coast of Mexico and is likely part of the Pacific-Decadal Oscillation, akin to the El Nino/Southern Oscillation or ENSO, it goes through warm and cold phases. The PDO is currently in a warm phase, which is manifest by above-normal sea surface temperatures along the Pacific Coast of North America. The juxtaposition of these two large masses of warm water has contributed to the ideal conditions for the development and rapid intensification of Hurricane Patricia southwest of Mexico.


What's Next for Patricia?

NHC forecasters said that Patricia is expected to degenerate to a remnant low pressure area later today or tonight over northeastern Mexico. However, the abundant moisture that this former Category 5 hurricane contains will keep moving.

Forecaster Beven at NHC noted in the 11 a.m. Discussion "Patricia is expected to produce total rainfall accumulations of 8 to 12 inches, with isolated maximum amounts of 20 inches, over the Mexican states of Nayarit, Jalisco, Colima, Michoacan, and Guerrero through Saturday. In addition, the heavy rain threat ahead of Patricia or its remnants will increase Saturday across northeast Mexico into coastal sections of Texas."

Patricia and Another System

Over the weekend the remnants of Patricia are also expected to add to the extreme rainfall in Texas. Rainfall from a stalled front that has been causing flooding in northern and central Texas will be combined with Patricia's remnants in southern Texas.


Outside the International Space Station, cameras captured dramatic views of Hurricane Patricia at 12:15 p.m. EDT on October 23, 2015 as the mammoth system moved north at about10 mph, heading for a potentially catastrophic landfall along the southwest coast of Mexico sometime during the day, according to the National Hurricane Center. Packing winds of 200 miles per hour, Patricia is the strongest in recorded history in the southeastern Pacific Ocean. The National Hurricane Center says that once Patricia crosses the Mexican coast it should weaken quickly and dissipate Oct. 24 due to upper level winds and mountainous terrain, but likely will introduce copious amounts of rainfall to the Texas coast through the weekend.