Did Dark Matter Doom the Dinosaurs?

Dark matter: The world’s brightest physicists know it’s there, but can’t say for sure what it is.

It is invisible, mysterious, and to most people — irrelevant to everyday life. But what if it could reach out and touch us? What if it already has, and so deeply that it just might be responsible for putting us here?

One Harvard physicist is exploring that idea, and pondering the possibility that dark matter may have triggered the most famous cosmic collision ever — the one that did in the dinosaurs and opened the way for mammals to take their place.

Theoretical physicist Lisa Randall, the Frank B. Baird Jr. Professor of Science, sees intriguing lines of evidence that tie dark matter to comets in the solar system’s distant Oort cloud, and from there to the 66-million-year-old impact crater on Mexico’s Yucatán coast.

Theoretical physicist Lisa Randall, the Frank B. Baird Jr. Professor of Science, sees intriguing lines of evidence that tie dark matter to comets in the solar system’s distant Oort cloud, and from there to the 66-million-year-old impact crater on Mexico’s Yucatán coast. 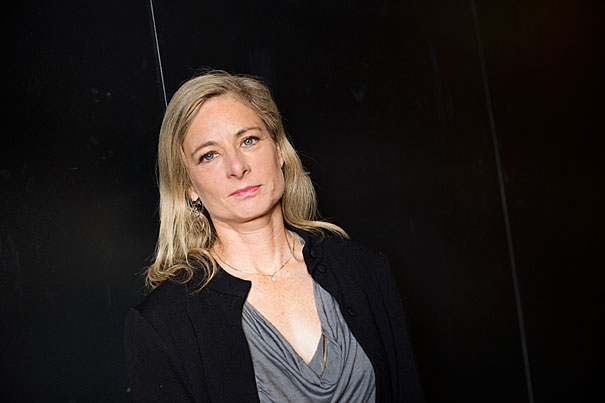 
Randall first explored the idea last year in an article, co-authored with Assistant Professor of Physics Matthew Reece, in the journal Physical Review Letters. Inspired by the intricate chain linking dark matter, Earth, dinosaurs, and modern life, Randall decided to take a deep dive into the subject for her new book, “Dark Matter and the Dinosaurs: The Astounding Interconnectedness of the Universe.”

“I was just fascinated by this story,” Randall said. “It was really nice for me to be able to communicate about dark matter through its potential connections to what we see today.”

The book, to be published Oct. 27, takes the reader on a tour of the universe, from the Big Bang to today, from the story of life to mass extinctions, from the distant galactic disk to Earth’s K-T boundary layer — a thin, globe-spanning blanket of dust that scientists believe is evidence of the cataclysmic impact that ended the dinosaurs’ reign.

The book suggests that a thin disk of dark matter could have influenced weakly bound comets in the outer regions of the solar system as it revolved around the center of the Milky Way, and may have been the ultimate cause of the impact. Randall admits that the disk hasn’t been found, but said that current data allows for it, and that instruments that might detect it aren’t far off.

Randall makes liberal use of anecdotes and analogies to explain complex scientific ideas. We learn something about Randall, too: She skis, has a robot that vacuums her floors, and was once taken not for a cosmologist — one who studies the universe’s broad structure — but a cosmetologist.

These four panels show the location of trans-Neptunian object 90377 Sedna, which lies in the farthest reaches of the Solar System. Each panel, moving clockwise from the upper left, successively zooms out to place Sedna in context. The first panel shows the orbits of the inner planets and Jupiter; and the asteroid belt. In the second panel, Sedna is shown well outside the orbits of Neptune and the Kuiper belt objects. Sedna's full orbit is illustrated in the third panel along with the object's location in 2004, nearing its closest approach to the Sun. The final panel zooms out much farther, showing that even this large elliptical orbit falls inside what was previously thought to be the inner edge of the spherical Oort cloud: a distribution of cold, icy bodies lying at the limits of the Sun's gravitational pull. Sedna's presence suggests that the previously speculated inner disk on the ecliptic does exist. 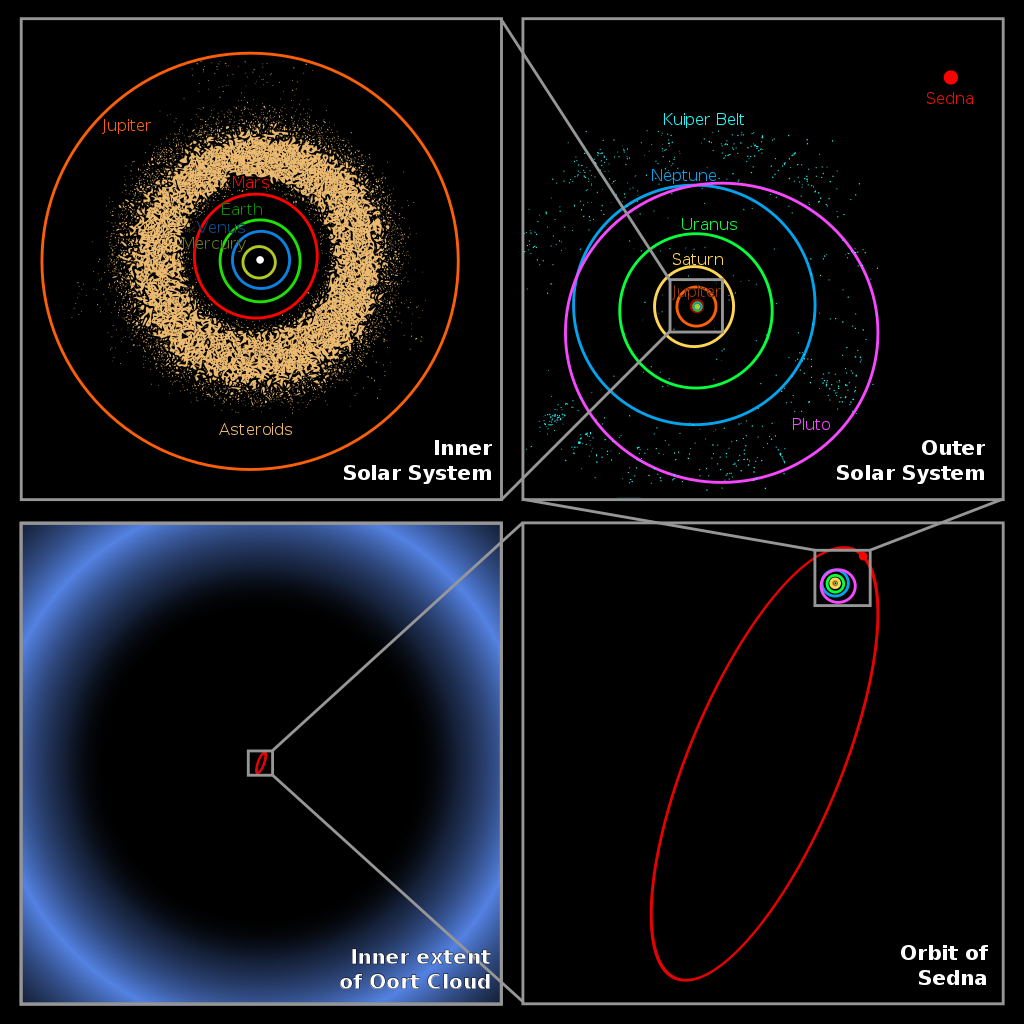 The dinosaurs’ demise is a dramatic example of connectedness. Scientists are reasonably sure the killer made an enormous impact, though there’s some question whether it was from a rocky asteroid that would have originated within the solar system or a comet originating at its far fringe, in a vast assemblage of icy bodies called the Oort cloud, far beyond the orbit of Pluto.

If the dinosaur killer was a comet, the next question is, what gave it the initial push toward Earth? Scientists confronting that question have an additional clue: The impact that caused the dinosaurs’ extinction wasn’t the only one in the planet’s history. There have been several, in fact, and there’s some evidence that they occur at regular — at least on a galactic scale — intervals of between 30 million and 35 million years.

The Oort cloud is so far away and the time scales involved so vast that investigators have sought answers outside the solar system, which circles the galactic center every 240 million years or so, moving up and down through the flattened plane of the galaxy as it does. Some researchers have explored whether that passage could possibly bump a comet onto a collision course with Earth, but the band of visible matter in the galactic disk is diffuse enough that the collisions it would trigger don’t match the timing of those on Earth.

This is where dark matter comes in.

While dark matter is invisible, it isn’t completely undetectable. All matter exerts a gravitational pull, and it is through dark matter’s gravitational effects on visible objects in the universe that scientists know it’s there.

Unlike visible matter, however, dark matter isn’t concentrated in the galactic disk. It is thought to be spread in a sphere around the galactic center that extends well above and below the concentration of stars and other ordinary matter.

Dark matter is invisible. Based on the effect of gravitational lensing, a ring of dark matter has been inferred in this image of a galaxy cluster (CL0024+17) and has been represented in blue. 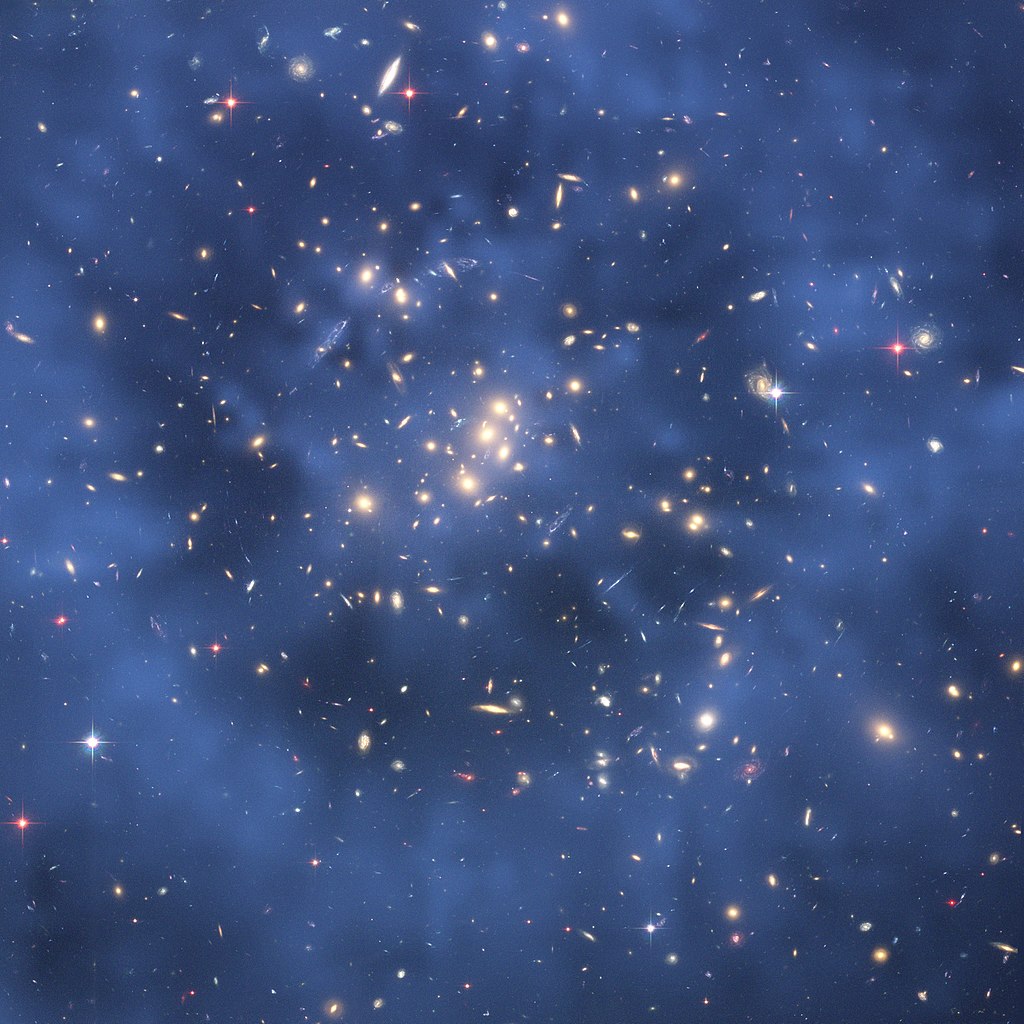 But what if, Randall asked, there were more than one kind of dark matter? After all, there are many kinds of visible matter, and there’s a lot more dark matter than visible matter. Scientists estimate that 85 percent of all matter in the universe is dark, so why should it all be one kind?

If there is a dark particle that is able to emit energy, as ordinary matter does, it would cool and condense, naturally forming a rotating disk around the galactic center. The hypothesized size of dark-matter particles — about 100 times larger than a proton — would create a disk up to 100 times thinner and 20 times denser than one created by visible matter, thin enough that the collision timing would match.

“Suppose dark matter had its own photon,” Randall said. “It could radiate and form a disk and the consequences could be very interesting.”

Randall, whose past work has dealt with concepts such as supersymmetry and extra dimensions, said that apart from research, educating the public about science is a high priority. Her three previous books were aimed at a general audience, and she’s worked in music, as well, writing the text for an opera based on her study of extra dimensions.

To Randall, the story of the dinosaur impact — one of five known mass extinctions — resonates today in disturbing ways.

“It’s so important to understand history,” Randall said. “There’s a sixth extinction going on. We’re losing so many species on this planet.”

This sixth extinction is a product of human activity. If readers of “Dark Matter and the Dinosaurs” take away nothing else, Randall said, she hopes they gain an understanding of just how interconnected elements of the universe can be, and how strongly humans are linked to non-human life on the planet.