Could 'The Day After Tomorrow' Happen? Collapse of Atlantic Circulation and Catastrophic Events

A researcher from the University of Southampton has produced a scientific study of the climate scenario featured in the disaster movie 'The Day After Tomorrow'.

In the 2004 film, climate warming caused an abrupt collapse of the Atlantic meridional overturning circulation (AMOC), leading to catastrophic events such as tornadoes destroying Los Angeles, New York being flooded and the nort

This is a temperature anomaly in degrees Celsius after 95 years from the onset of an AMOC collapse. 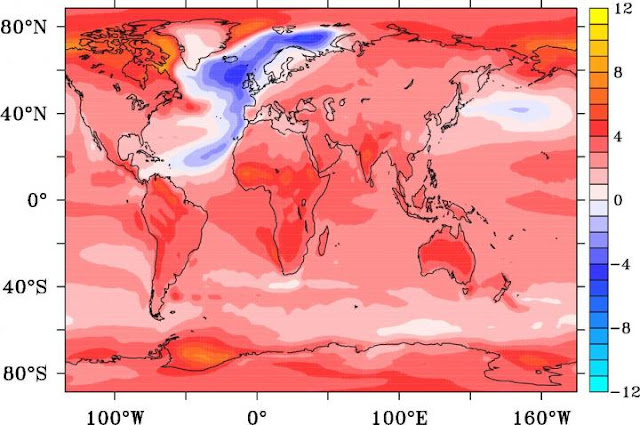 Although the scientific credibility of the film drew criticism from climate scientists, the scenario of an abrupt collapse of the AMOC, as a consequence of anthropogenic greenhouse warming, was never assessed with a state-of-the-art climate model.

Using the German climate model ECHAM at the Max-Planck Institute in Hamburg, Professor Sybren Drijfhout from Ocean and Earth Science at the University of Southampton found that, for a period of 20 years, the earth will cool instead of warm if global warming and a collapse of the AMOC occur simultaneously. Thereafter, global warming continues as if the AMOC never collapsed, but with a globally averaged temperature offset of about 0.8°C.

This image shows recovery time in years, defined as the time needed for surface air temperature to recover its values from 1990-2000 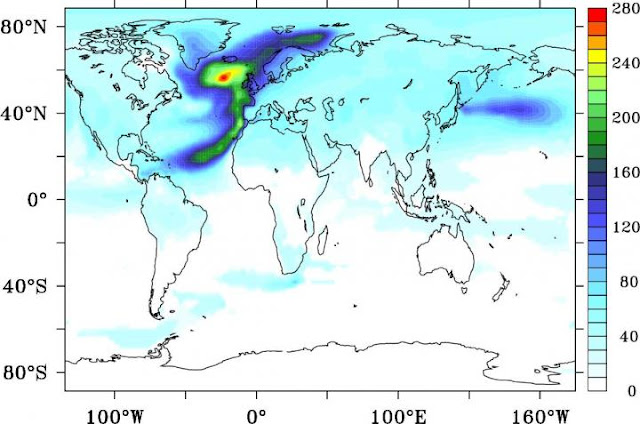 Professor Drijfhout said: "The planet earth recovers from the AMOC collapse in about 40 years when global warming continues at present-day rates, but near the eastern boundary of the North Atlantic (including the British Isles) it takes more than a century before temperature is back to normal."

Interestingly, the effect of atmospheric cooling due to an AMOC collapse is associated with heat flow from the atmosphere into the ocean, which has been witnessed during the climate hiatus of the last 15 years.

Professor Drijfhout added: "When a similar cooling or reduced heating is caused by volcanic eruptions or decreasing greenhouse emissions the heat flow is reversed, from the ocean into the atmosphere. A similar reversal of energy flow is also visible at the top of the atmosphere. These very different fingerprints in energy flow between atmospheric radiative forcing and internal ocean circulation processes make it possible to attribute the cause of a climate hiatus period."

However, the study, which appears in Scientific Reports, says that the recent period of very weak warming cannot be attributed to one single cause. Most probably El Niño plays a role and possibly also changes in the Southern Ocean due to shifting and increasing westerlies.

Professor Sybren said: "It can be excluded, however, that this hiatus period was solely caused by changes in atmospheric forcing, either due to volcanic eruptions, more aerosols emissions in Asia, or reduced greenhouse gas emissions. Changes in ocean circulation must have played an important role. Natural variations have counteracted the greenhouse effect for a decade or so, but I expect this period is over now."

Contacts and sources:
Glenn Harris
University of Southampton
on October 09, 2015