Much like the flapping of a windsock displays the quick changes in wind’s speed and direction, called turbulence, comet tails can be used as probes of the solar wind – the constant flowing stream of material that leaves the sun in all directions.

This video, captured by NASA’s STEREO mission, shows the motion of Comet Encke and its tail as it approached the sun in April 2007. Scientists studied the movements of hundreds of dense chunks of glowing ionized gas within the comet's tail, finding evidence of turbulence that may explain both the solar wind’s variability and its unexpectedly high temperatures.

According to new studies of a comet tail observed by NASA’s Solar and Terrestrial Relations Observatory, or STEREO, the vacuum of interplanetary space is filled with turbulence and swirling vortices similar to gusts of wind on Earth. Such turbulence can help explain two of the wind's most curious features: its variable nature and unexpectedly high temperatures. A paper on this work was published in “The Astrophysical Journal” on Oct. 13, 2015.

“The solar wind at Earth is about 70 times hotter than one might expect from the temperature of the solar corona and how much it expands as it crosses the void,” said Craig DeForest, a solar physicist at the Southwest Research Institute in Boulder, Colorado, and lead author on the study. “The source of this extra heat has been a mystery of solar wind physics for several decades.”

There is much that is conclusively known about the solar wind: It is made of a sea of electrically-charged electrons and ions and also carries the interplanetary magnetic field along for the ride, forging a magnetic connection between the sun and Earth and the other planets in the solar system. There is no consensus, however, on what powers the wind's acceleration, especially when it is traveling at its fastest speeds. Complicating the search for such understanding are two of its most distinctive characteristics: The solar wind can be highly variable, meaning that measurements just short times or distances apart can yield quite different results. It is also very, very hot—remarkably so.

The new study helped explain these characteristics using the heliospheric imager onboard STEREO. The scientists studied the movements of hundreds of dense chunks of glowing ionized gas within the ribbon of Comet Encke’s tail, which passed within STEREO’s field of view in 2007. Fluctuations in the solar wind are mirrored in what is seen in the tail, so by tracking these clumps, scientists were able to reconstruct the motion of the solar wind, catching an unprecedented look at the turbulence.

Identifying this turbulence in the solar wind has the potential to solve the mystery of how the solar wind gets so hot. Based on the intensity of the turbulence researchers saw, they calculated that the energy available from turbulence is more than ten times what would be required to heat the solar wind to observed temperatures.

What's more, it also helps to solve the variability problem, which other theories have not yet done successfully.

“This turbulent motion mixes up the solar wind, leading to the rapid variation that we see at Earth,” said DeForest.

A visualization of the constant outflow of material from the sun, known as the solar wind. There is no consensus on what powers the solar wind’s acceleration, its extreme variability, or its remarkably high temperatures. For years, scientists have taken direct measurements of the solar wind—known as in situ measurements, which are captured as the solar wind passes over one of the dozens of satellites carrying the appropriate instruments. Most of these satellites observe the sun from a vantage point similar to that of Earth. STEREO-A, however, orbits the sun in a slightly smaller and faster orbit than Earth, meaning it moves around the sun farther and farther from Earth over time. So, in addition to the images of Comet Encke as it streamed past in April 2007, STEREO-A also provides us with in situ solar wind measurements from a unique perspective.

On the other hand, the solar wind is notoriously hard to study remotely—that is, with measurements from afar. Its particles flow at 250 miles per second, and they are so dispersed that interplanetary space at Earth’s orbit has about a thousand times fewer particles in one cubic inch of space than the best laboratory vacuum on Earth.

This solar wind dominates the space environment within our solar system and travels well past Pluto, creating a huge bubble known as the heliosphere. Closer to home, the solar wind also interacts with Earth’s magnetic field, sometimes initiating changes in near-Earth space that can disrupt our space technology or cause auroras. So scientists needed to come up with a way to look at something that’s invisible—and that’s where Comet Encke came in.

Comet Encke’s ion tail can be seen stretching away from the sun towards the top of the image, captured by NASA’s MESSENGER spacecraft on Nov. 17, 2013, when the comet was about 33 million miles from the sun. The tail is created when the solar wind sweeps over the comet, capturing vaporized material and causing it to trail out behind the comet. The tail follows the lines of the magnetic field ingrained in the solar wind and reveals its motion. 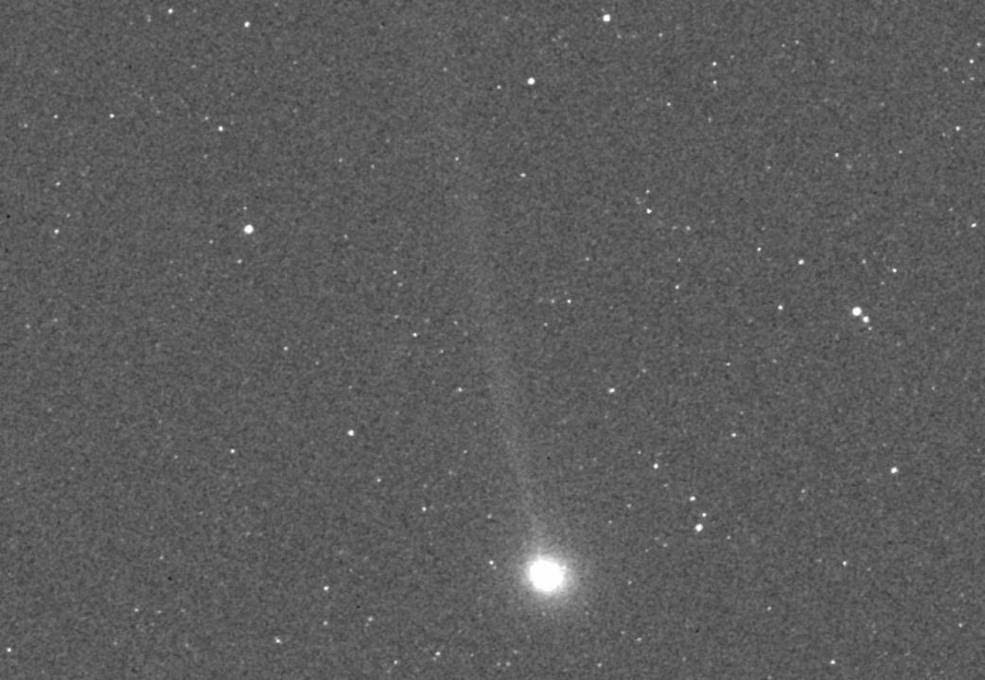 All comets, if they get close enough to the sun, will form what’s called an ion tail. One of the most recognizable features of these hunks of ice and rock, the ion tail is created when the solar wind—made of hot, charged gas, called plasma—sweeps over the comet, capturing the material that has been vaporized into plasma by sunlight, causing it to trail out behind the comet. This tail follows the lines of the magnetic field embedded in the solar wind and reveals its motion.

Comet Encke has some unusual characteristics that scientists were able to leverage to study the solar wind. Unlike most comets, Comet Encke has what is called a compact tail. Rather than feathering out loosely, creating a wide spray of ions, Comet Encke’s ion tail streams out in a tight, bright ribbon of glowing gas with compact features.


"In situ measurements are limited because they don't follow the turbulence along its path,” said William Matthaeus, a professor of physics and astronomy at the University of Delaware and co-author on the study. “Now, for the first time, we observed the turbulent motions along their complex paths and quantified the mixing. We actually see the turbulence.”

Using the images from STEREO-A, scientists tracked 230 different features as they weaved through Comet Encke’s tail over the course of about 9.3 million miles of its journey around the sun. They then compared these motions to how they would expect solid objects to orbit around the sun, finding evidence that these gas clumps were being picked up by drag against the solar wind. They found that, though the gas clumps moved more or less randomly on smaller scales, they exhibited clear patterns on the scale of about 300,000 miles, indicating large-scale swirling eddies are mixing the solar wind—and possibly heating it as well.

“Turbulent motion cascades down into motion on smaller and smaller scales until it hits the level of the fundamental gyrations of the particles about the magnetic field, where it becomes heat,” said Aaron Roberts, a heliophysicist at NASA’s Goddard Space Flight Center in Greenbelt, Maryland. “This study estimates that there is enough energy contained in these swirling eddies to explain the extra heat several times over.”

These observations of the solar wind provide a preview of what NASA plans to observe more directly with the Solar Probe Plus, or SPP, mission in 2018. SPP will travel to within nine solar radii of the sun, which is nine times the radius of the Sun, or about 3.9 million miles. Since it’s possible to remotely observe comets closer to the sun than any spacecraft can travel, studying them does provide unique information about the solar wind and our sun’s atmosphere.

STEREO is the third mission in the NASA Heliophysics Division’s Solar Terrestrial Probes program, which is managed by NASA Goddard for NASA’s Science Mission Directorate, in Washington.