NASA's Cassini spacecraft has begun returning its best-ever views of the northern extremes of Saturn's icy, ocean-bearing moon Enceladus. The spacecraft obtained the images during its Oct. 14 flyby, passing 1,142 miles (1,839 kilometers) above the moon's surface. Mission controllers say the spacecraft will continue transmitting images and other data from the encounter for the next several days. 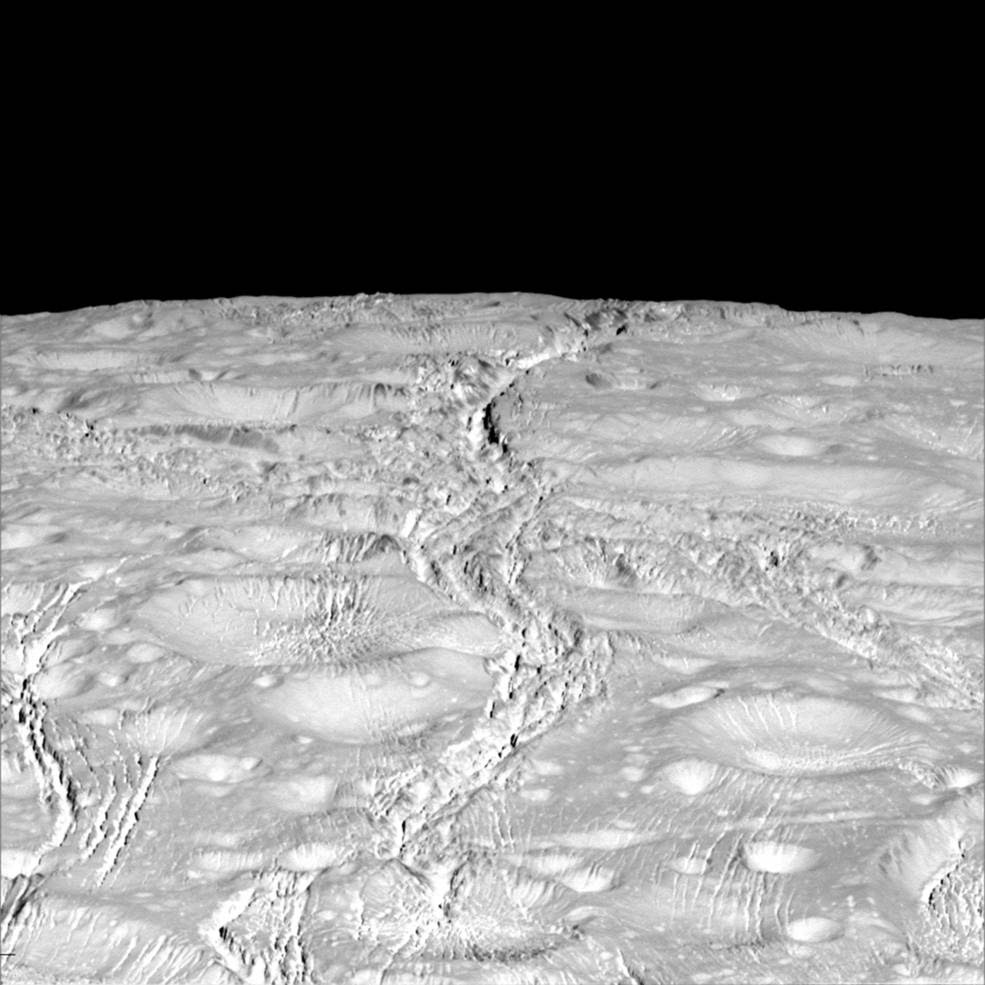 This view from NASA's Cassini spacecraft shows battered terrain around the north pole of Saturn's icy moon Enceladus. Craters crowd and overlap each other, each one recording an impact in the moon's distant past. The moon's north pole lies approximately at the top of this view from Cassini's wide-angle camera. A companion view from the narrow-angle camera (PIA19660) shows the pole at a resolution about ten times higher. North on Enceladus is up. The image was taken in visible light by Cassini on Oct. 14, 2015. The view was acquired at a distance of approximately 4,000 miles (6,000 kilometers) from Enceladus and at a Sun-Enceladus-spacecraft, or phase, angle of 8 degrees. Image scale is 1,093 feet (333 meters) per pixel.

Scientists expected the north polar region of Enceladus to be heavily cratered, based on low-resolution images from the Voyager mission, but the new high-resolution Cassini images show a landscape of stark contrasts. "The northern regions are crisscrossed by a spidery network of gossamer-thin cracks that slice through the craters," said Paul Helfenstein, a member of the Cassini imaging team at Cornell University, Ithaca, New York. "These thin cracks are ubiquitous on Enceladus, and now we see that they extend across the northern terrains as well."

Cassini's next encounter with Enceladus is planned for Oct. 28, when the spacecraft will come within 30 miles (49 kilometers) of the moon's south polar region. During the encounter, Cassini will make its deepest-ever dive through the moon's plume of icy spray, sampling the chemistry of the extraterrestrial ocean beneath the ice. Mission scientists are hopeful data from that flyby will provide evidence of how much hydrothermal activity is occurring in the moon's ocean, along with more detailed insights about the ocean's chemistry -- both of which relate to the potential habitability of Enceladus.

In addition to the processed images, unprocessed, or "raw," images are posted on the Cassini mission website at: http://saturn.jpl.nasa.gov/mission/flybys/enceladus20151014
NASA's Cassini spacecraft spied this tight trio of craters as it approached Saturn's icy moon Enceladus for a close flyby on Oct. 14, 2015. The craters, located at high northern latitudes, are sliced through by thin fractures -- part of a network of similar cracks that wrap around the snow-white moon. The image was taken in visible light with the Cassini spacecraft narrow-angle camera on Oct. 14, 2015 at a distance of approximately 6,000 miles (10,000 kilometers) from Enceladus. Image scale is 197 feet (60 meters) per pixel. 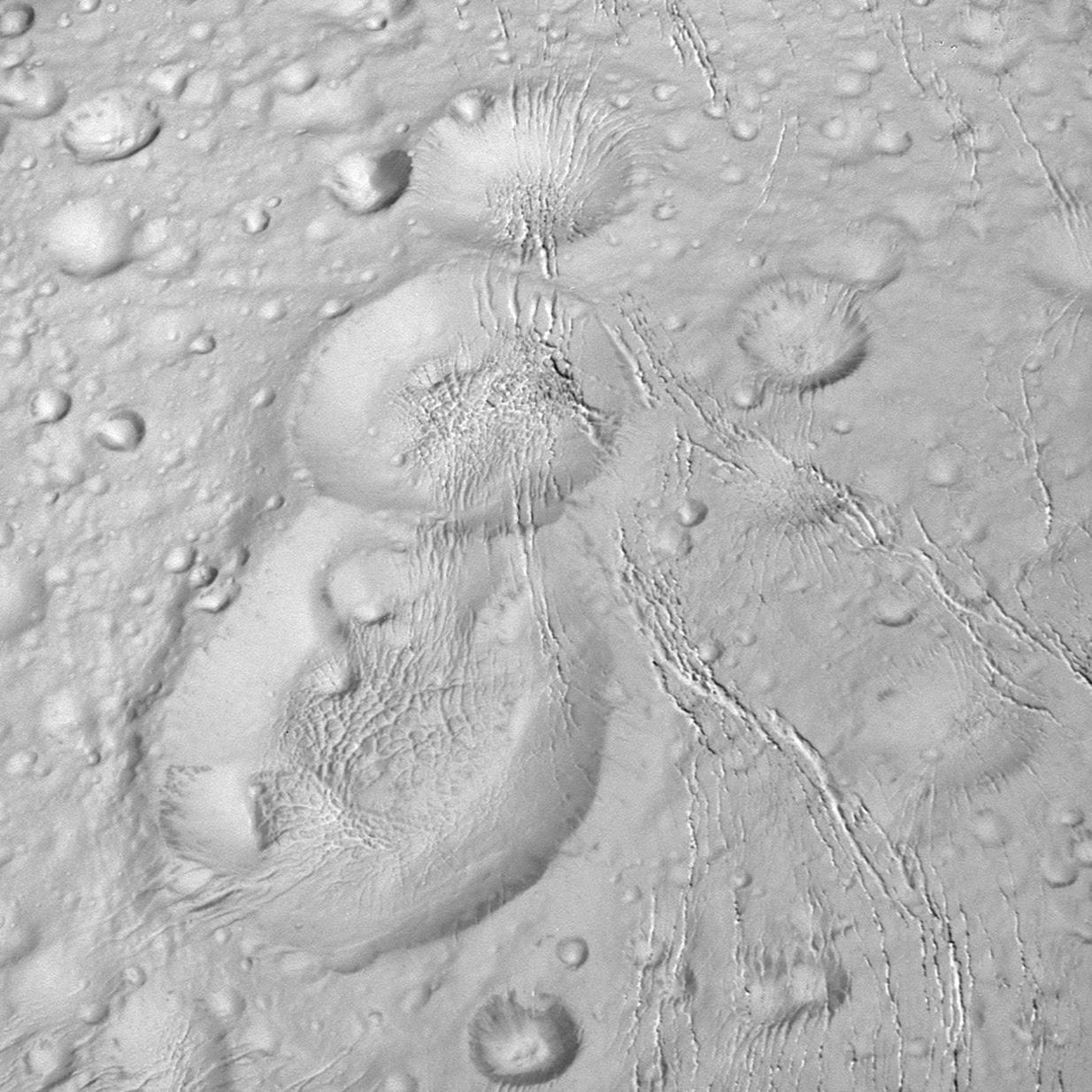 The image was taken with the Cassini spacecraft narrow-angle camera on Oct. 14, 2015 using a spectral filter which preferentially admits wavelengths of ultraviolet light centered at 338 nanometers.
An online toolkit for all three final Enceladus flybys is available at:  http://solarsystem.nasa.gov/finalflybys

The Cassini-Huygens mission is a cooperative project of NASA, ESA (European Space Agency) and the Italian Space Agency. NASA's Jet Propulsion Laboratory in Pasadena, California, manages the mission for the agency's Science Mission Directorate in Washington. JPL is a division of the California Institute of Technology in Pasadena. The Cassini imaging operations center is based at the Space Science Institute in Boulder, Colorado.

Cassini's final close Enceladus flyby will take place on Dec. 19, when the spacecraft will measure the amount of heat coming from the moon's interior. The flyby will be at an altitude of 3,106 miles (4,999 kilometers).