The extensive valley networks on the surface of Mars were probably created by running water billions of years ago, but the source of that water is unknown. Now, a team of Penn State and NASA researchers is using climate models to predict how greenhouse warming could be the source of the water.

"Everyone is looking for life on Mars, and if Mars was habitable early on as indicated by flowing water, then the chances of there being some sort of life there now goes up," said Natasha Batalha, graduate student in astronomy and astrophysics, Penn State. "Our work involves using models to best estimate what was happening on the surface of Mars 3.8 billion years ago."

The Colorado River canyon, just above Grand Canyon (left), and Nanedi Vallis on Mars (right) pictured at the same scale shows how both canyons were formed by rivers that appear to have been approximately the same width. The river channel on Earth looks darker because it is filled with water, whereas Nanedi Vallis has been dry for billions of years. 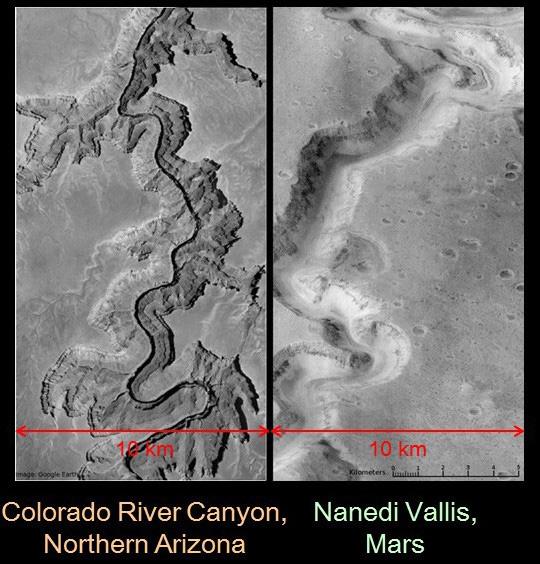 Previous studies analyzing craters support the idea of flowing water on early Mars but still unknown is how surface warming occurred to melt that water and how much water was really there.

"If we compare some of these valleys on Mars to what we know on Earth, for example the Colorado River, then they look to be the same width," said James Kasting, Evan Pugh Professor of Geosciences, Penn State. "We know how much water it took to carve the Grand Canyon based on five to six million years of rainfall, which is estimated to be about three to six million feet (of rainfall)."

In 2014, Kasting's group proposed a climate model showing Mars warmed by a dense atmosphere of greenhouse gases, specifically carbon dioxide and hydrogen. In a recent issue of Icarus, they report that using a photochemical model, they determined the possibility that there was a high percentage of hydrogen in the atmosphere. According to Batalha and Kasting, photochemical models simulate different aspects of the atmosphere using mathematics to determine the chemicals and how they react. They also set limits that define what is happening at the surface and in the atmosphere.

"The main focus of our work was how can you, and is it even possible to, get a 5 percent hydrogen atmosphere because 5 percent is a lot. Terrestrial planets don't usually have that big of a hydrogen envelope because it escapes pretty easily," said Batalha.

A competing hypothesis, called the impact hypothesis, claims that the high bombardment of asteroids on the surface of Mars led to a temporary warming, causing steam atmospheres that then condensed and produced rainfall that carved the valleys on Mars' surface. However, that would have generated only around 1,500 feet of water, while the Grand Canyon took millions of feet of water to form, according to Kasting.

Data gathered by NASA's Curiosity Rover, launched in 2011 and currently on Mars, suggests prolonged, standing liquid water was present in Gale Crater. According to Batalha, further evidence showing water stayed on Mars for tens of millions of years would support a warm early Mars while putting the impact hypothesis to rest.

"While Curiosity couldn't directly prove our hypothesis about a high hydrogen atmosphere, if you get millions of years of warmth, then you're driven towards hydrogen because we haven't been able to figure out any other way to create that warmth. All of the other greenhouse mechanisms fail in our models," added Batalha.