Warming ocean temperatures a third of a mile below the surface, in a dark ocean in areas with little marine life, might attract scant attention. But this is precisely the depth where frozen pockets of methane ‘ice’ transition from a dormant solid to a powerful greenhouse gas.

New research suggests that subsurface warming could be causing more methane gas to bubble up off the Washington and Oregon coast.

Sonar image of bubbles rising from the seafloor off the Washington coast. The base of the column is 515 meters deep (about 1/3 of a mile) and the top of the plume is at 1/10 of a mile (180 meters) deep. 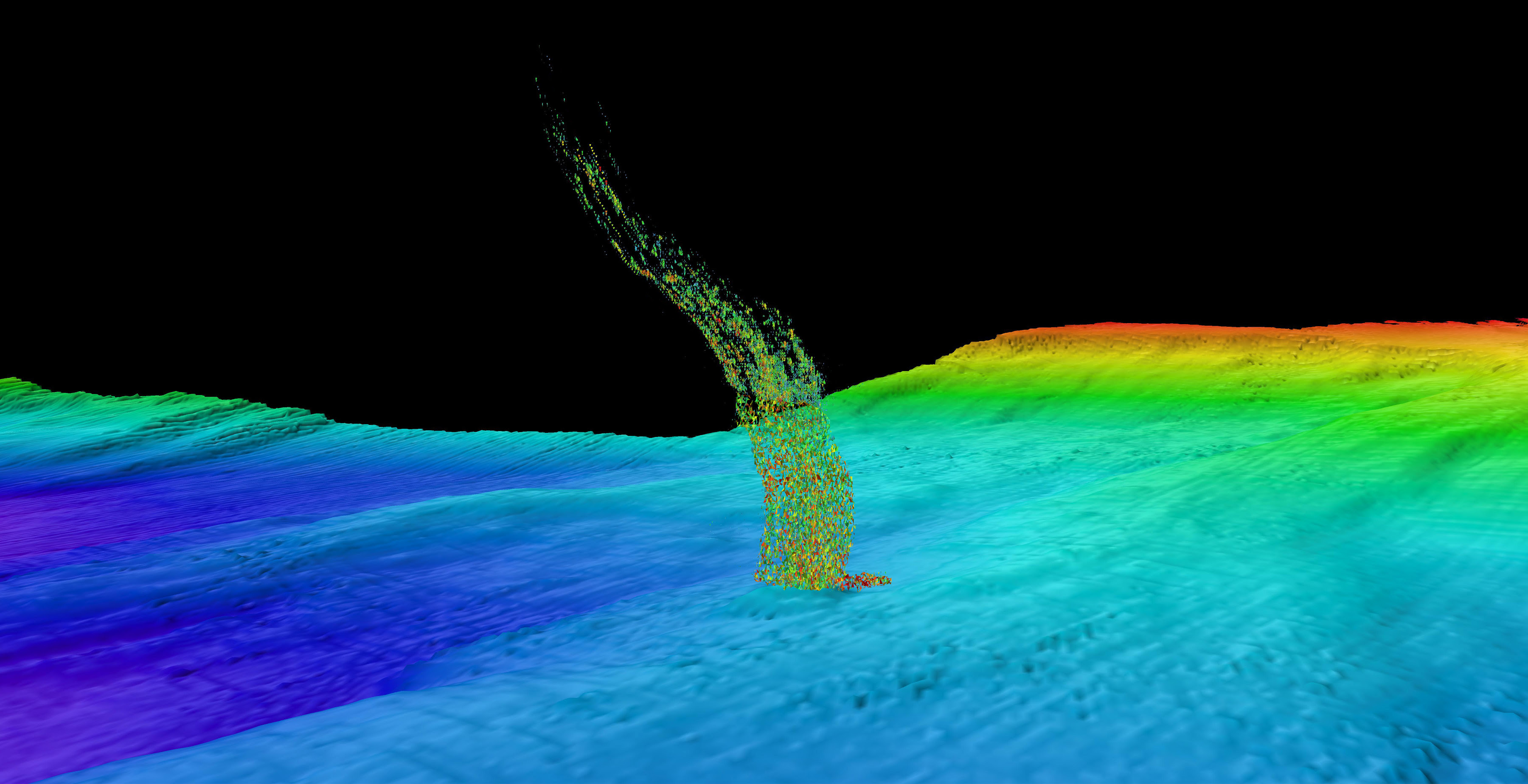 The study shows that of 168 bubble plumes observed within the past decade, a disproportionate number were seen at a critical depth for the stability of methane hydrates. The study has been accepted for publication in Geochemistry, Geophysics, Geosystems, a journal of the American Geophysical Union.

“We see an unusually high number of bubble plumes at the depth where methane hydrate would decompose if seawater has warmed,” said lead author H. Paul Johnson, a University of Washington professor of oceanography. “So it is not likely to be just emitted from the sediments; this appears to be coming from the decomposition of methane that has been frozen for thousands of years.”

Methane has contributed to sudden swings in Earth’s climate in the past. It is unknown what role it might contribute to contemporary climate change, although recent studies have reported warming-related methane emissions in Arctic permafrost and off the Atlantic coast.

Of the 168 methane plumes in the new study, some 14 were located at the transition depth – more plumes per unit area than on surrounding parts of the Washington and Oregon seafloor.

If methane bubbles rise all the way to the surface, they enter the atmosphere and act as a powerful greenhouse gas. But most of the deep-sea methane seems to get consumed during the journey up. Marine microbes convert the methane into carbon dioxide, producing lower-oxygen, more-acidic conditions in the deeper offshore water, which eventually wells up along the coast and surges into coastal waterways.

“Current environmental changes in Washington and Oregon are already impacting local biology and fisheries, and these changes would be amplified by the further release of methane,” Johnson said.

Another potential consequence, he said, is the destabilization of seafloor slopes where frozen methane acts as the glue that holds the steep sediment slopes in place.

Map showing locations of the 168 bubble plumes used in the study. 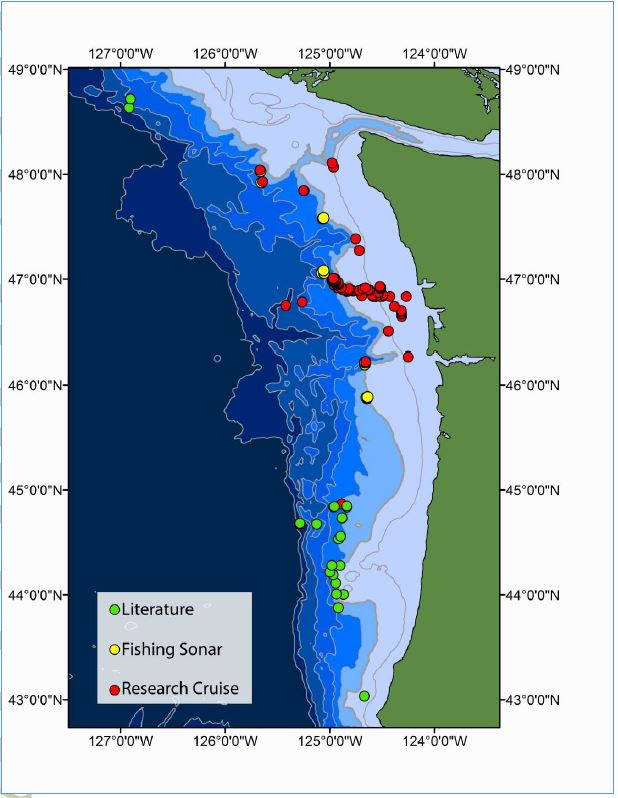 Methane deposits are abundant on the continental margin of the Pacific Northwest coast. A 2014 study from UW documented that the ocean in the region is warming at a depth of 500 meters (0.3 miles), by water that formed decades ago in a global warming hotspot off Siberia and then travelled with ocean currents east across the Pacific Ocean. That previous paper calculated that warming at this depth would theoretically destabilize methane deposits on the Cascadia subduction zone, which runs from northern California to Vancouver Island.

At the cold temperatures and high pressures present on the continental margin, methane gas in seafloor sediments forms a crystal lattice structure with water. The resulting ice-like solid, called methane hydrate, is unstable and sensitive to changes in temperature. When the ocean warms, the hydrate crystals dissociate and methane gas leaks into the sediment. Some of that gas escapes from the sediment pores as a gas.

The 2014 study calculated that with present ocean warming, such hydrate decomposition could release roughly 0.1 million metric tons (220 million pounds) of methane per year into the sediments off the Washington coast, about the same amount of methane from the 2010 Deepwater Horizon blowout.

The new study looks for evidence of bubble plumes off the coast, including observations by UW research cruises, earlier scientific studies and local fishermen’s reports. The authors included bubble plumes that rose at least 150 meters (490 feet) tall that clearly originate from the seafloor. The dataset included 45 plumes originally detected by fishing boats, whose modern sonars can detect the bubbles while looking for schools of fish, with their observations later confirmed during UW research cruises.

Results show that methane gas is slowly released at almost all depths along the Washington and Oregon coastal margin. But the plumes are significantly more common at the critical depth of 500 meters (0.3 miles), where hydrate would decompose due to seawater warming.

“What we’re seeing is possible confirmation of what we predicted from the water temperatures: Methane hydrate appears to be decomposing and releasing a lot of gas,” Johnson said. “If you look systematically, the location on the margin where you’re getting the largest number of methane plumes per square meter, it is right at that critical depth of 500 meters.”

Still unknown, however, is whether these plumes are really from the dissociation of frozen methane deposits.

“The results are consistent with the hypothesis that modern bottom-water warming is causing the limit of methane hydrate stability to move downslope, but it’s not proof that the hydrate is dissociating,” said co-author Evan Solomon, a UW associate professor of oceanography.

Solomon is now analyzing the chemical composition of samples from bubble plumes emitted by sediments along the Washington coast at about 500 meters deep. Results will confirm whether the gas originates from methane hydrates rather than from some other source, such as the passive migration of methane from deeper reservoirs to the seafloor, which causes most of the other bubble plumes on the continental margin.

The research was funded by the National Science Foundation and the U.S. Department of Energy. Other co-authors are Marie Salmi, a UW doctoral student in oceanography with Johnson, and Una Miller, a former UW undergraduate who is now a research assistant in Johnson’s group. Miller will present the results at the American Geophysical Union’s annual fall meeting in San Francisco.