When a star comes too close to a black hole, the intense gravity of the black hole results in tidal forces that can rip the star apart. In these events, called tidal disruptions, some of the stellar debris is flung outward at high speeds, while the rest falls toward the black hole. This causes a distinct X-ray flare that can last for years.

This illustration of a recently observed tidal disruption, named ASASSN-14li, shows a disk of stellar debris around the black hole at the upper left. A long tail of ejected stellar debris extends to the right, far from the black hole. The X-ray spectrum obtained with NASA's Chandra X-ray Observatory (seen in the inset box) and ESA's XMM-Newton satellite both show clear evidence for dips in X-ray intensity over a narrow range of wavelengths. These dips are shifted toward bluer wavelengths than expected, providing evidence for a wind blowing away from the black hole. 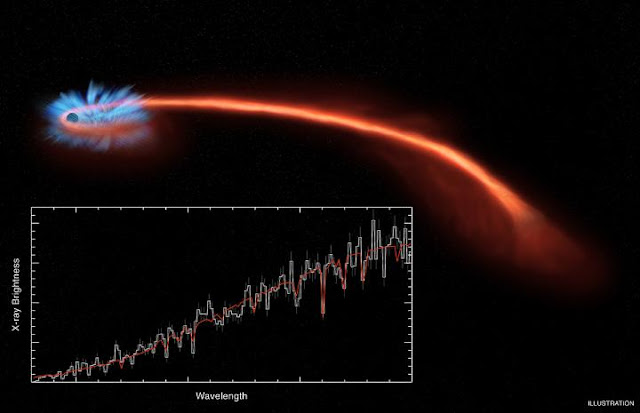 A team of astronomers, including several from the University of Maryland, has observed a tidal disruption event in a galaxy that lies about 290 million light years from Earth. The event is the closest tidal disruption discovered in about a decade, and is described in a paper published in the October 22, 2015 issue of the journal Nature.

"These results support some of our newest ideas for the structure and evolution of tidal disruption events," said study co-author Coleman Miller, professor of astronomy at UMD and director of the Joint Space-Science Institute. "In the future, tidal disruptions can provide us with laboratories to study the effects of extreme gravity."

"We have seen evidence for a handful of tidal disruptions over the years and have developed a lot of ideas of what goes on," said lead author Jon Miller, a professor of astronomy at the University of Michigan. "This one is the best chance we have had so far to really understand what happens when a black hole shreds a star."

After a star is destroyed by a tidal disruption, the black hole's strong gravitational forces draw in most of the star's remains. Friction heats this infalling debris, generating huge amounts of X-ray radiation. Following this surge of X-rays, the amount of light decreases as the stellar material falls beyond the black hole's event horizon--the point beyond which no light or other information can escape.

Gas often falls toward a black hole by spiraling inward and forming a disk. But the process that creates these disk structures, known as accretion disks, has remained a mystery. By observing ASASSN-14li, the team of astronomers was able to witness the formation of an accretion disk as it happened, by looking at the X-ray light at different wavelengths and tracking how those emissions changed over time.

The researchers determined that most of the X-rays are produced by material that is extremely close to the black hole. In fact, the brightest material might actually occupy the smallest possible stable orbit. But astronomers are equally interested to learn what happens to the gas that doesn't get drawn past the event horizon, but instead is ejected away from the black hole.

"The black hole tears the star apart and starts swallowing material really quickly, but that's not the end of the story," said study co-author Jelle Kaastra, an astronomer at the Institute for Space Research in the Netherlands. "The black hole can't keep up that pace so it expels some of the material outwards."

"This result highlights the importance of multi-wavelength observations," explained study co-author Suvi Gezari, an assistant professor of astronomy at UMD. "Even though the event was discovered with an optical survey telescope, prompt X-ray observations were key in determining the characteristic temperature and radius of the emission and catching the signatures of an outflow."

Astronomers are hoping to find and study more events like ASASSN-14li so they can continue to test theoretical models about how black holes affect their nearby environments, while learning more about what black holes do to any stars or other bodies that wander too close.

This research was supported by NASA and the European Space Agency (ESA). The content of this article does not necessarily reflect the views of these organizations.