Astronomers have for the first time probed the magnetic fields in the mysterious inner regions of stars, finding they are strongly magnetized.

Using a technique called asteroseismology, the scientists were able to calculate the magnetic field strengths in the fusion-powered hearts of dozens of red giants, stars that are evolved versions of our sun.

Artistic representation (not to scale) of a red giant star with strong internal magnetic fields. Waves propagating through the star become trapped within the stellar core when a strong magnetic field is present, producing a "magnetic greenhouse effect" that reduces the observed amplitude of stellar pulsations. 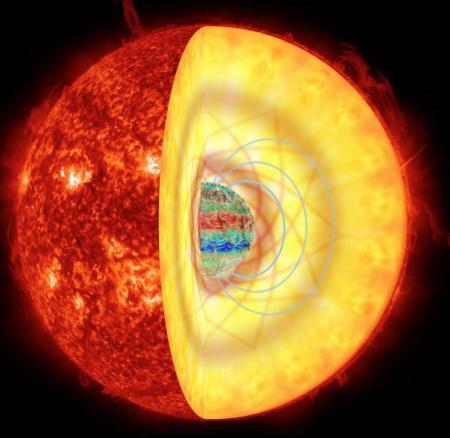 "In the same way medical ultrasound uses sound waves to image the interior of the human body, asteroseismology uses sound waves generated by turbulence on the surface of stars to probe their inner properties," says Caltech postdoctoral researcher Jim Fuller, who co-led a new study detailing the research.

The findings, published in the October 23 issue of Science, will help astronomers better understand the life and death of stars. Magnetic fields likely determine the interior rotation rates of stars; such rates have dramatic effects on how the stars evolve.

Until now, astronomers have been able to study the magnetic fields of stars only on their surfaces, and have had to use supercomputer models to simulate the fields near the cores, where the nuclear-fusion process takes place. "We still don't know what the center of our own sun looks like," Fuller says.

Red giants have a different physical makeup from so-called main-sequence stars such as our sun--one that makes them ideal for asteroseismology (a field that was born at Caltech in 1962, when the late physicist and astronomer Robert Leighton discovered the solar oscillations using the solar telescopes at Mount Wilson). The cores of red-giant stars are much denser than those of younger stars. As a consequence, sound waves do not reflect off the cores, as they do in stars like our sun. Instead, the sound waves are transformed into another class of waves, called gravity waves.
Location

"It turns out the gravity waves that we see in the red giants do propagate all the way to the center of these stars," says co-lead author Matteo Cantiello, a specialist in stellar astrophysics from UC Santa Barbara's Kavli Institute for Theoretical Physics (KITP).

This conversion from sound waves to gravity waves has major consequences for the tiny shape changes, or oscillations, that red giants undergo. "Depending on their size and internal structure, stars oscillate in different patterns," Fuller says. In one form of oscillation pattern, known as the dipole mode, one hemisphere of the star becomes brighter while the other becomes dimmer. Astronomers observe these oscillations in a star by measuring how its light varies over time.

When strong magnetic fields are present in a star's core, the fields can disrupt the propagation of gravity waves, causing some of the waves to lose energy and become trapped within the core. Fuller and his coauthors have coined the term "magnetic greenhouse effect" to describe this phenomenon because it works similarly to the greenhouse effect on Earth, in which greenhouse gases in the atmosphere help trap heat from the sun. The trapping of gravity waves inside a red giant causes some of the energy of the star's oscillation to be lost, and the result is a smaller than expected dipole mode.

In 2013, NASA's Kepler space telescope, which can measure stellar brightness variations with incredibly high precision, detected dipole-mode damping in several red giants. Dennis Stello, an astronomer at the University of Sydney, brought the Kepler data to the attention of Fuller and Cantiello. Working in collaboration with KITP director Lars Bildsten and Rafael Garcia of France's Alternative Energies and Atomic Energy Commission, the scientists showed that the magnetic greenhouse effect was the most likely explanation for dipole-mode damping in the red giants. Their calculations revealed that the internal magnetic fields of the red giants were as much as 10 million times stronger than Earth's magnetic field.

"This is exciting, as internal magnetic fields play an important role for the evolution and ultimate fate of stars," says Professor of Theoretical Astrophysics Sterl Phinney, Caltech's executive officer for astronomy, who was not involved in the study.

A better understanding of the interior magnetic fields of stars could also help settle a debate about the origin of powerful magnetic fields on the surfaces of certain neutron stars and white dwarfs, two classes of stellar corpses that form when stars die.

"The magnetic fields that they find in the red-giant cores are comparable to those of the strongly magnetized white dwarfs," Phinney says. "The fact that only some of the red giants show the dipole suppression, which indicates strong core fields, may well be related to why only some stars leave behind remnants with strong magnetic fields after they die."

The asteroseismology technique the team used to probe red giants probably will not work with our sun. "However," Fuller says, "stellar oscillations are our best probe of the interiors of stars, so more surprises are likely."

The paper is entitled "Asteroseismology Can Reveal Strong Internal Magnetic Fields in Red Giant Stars." In addition to Fuller, Cantiello, and Bildsten, the other coauthor is Dennis Stello from the University of Sydney.
on October 23, 2015