Are Fish The Greatest Athletes On The Planet?

When you think of the world's greatest athletes, names like Usain Bolt generally spring to mind, but scientists have discovered the best athletes could well be found in the water, covered in scales.

Scientists have discovered that fish are far more effective at delivering oxygen throughout their body than almost any other animal, giving them the athletic edge over other species.

Fish are far more effective at delivering oxygen throughout their body than almost any other animal. 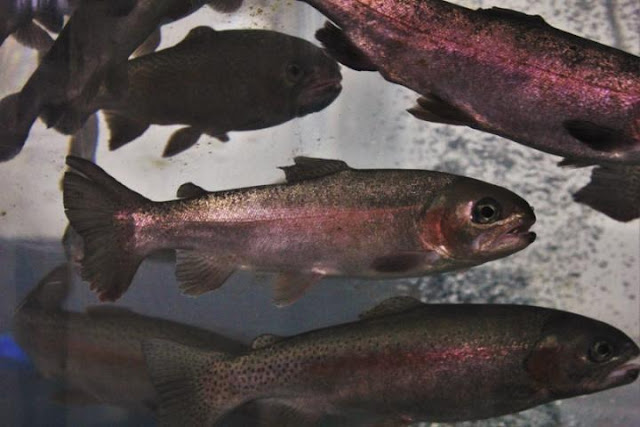 "Fish exploit a mechanism that is up to 50-times more effective in releasing oxygen to their tissues than that found in humans," says study lead author, Dr Jodie Rummer from the ARC Centre of Excellence for Coral Reef Studies at James Cook University.

"This is because their haemoglobin, the protein in blood that transports oxygen, is more sensitive to changes in pH than ours and more than the haemoglobins in other animals."

This is especially important for fish during times of stress, to escape from predators, or when they are living in water that is low in oxygen. They can double or even triple oxygen delivery to their tissues during these critical times.

For the past decade researchers have been using rainbow trout to investigate oxygen delivery in fish. They first discovered and tested this mechanism by monitoring muscle oxygen levels in real-time in trout.

Now they have determined just how powerful that system can be and have compared the results with medical studies on humans.

"This information tells us how fish have adapted this very important process of getting oxygen and delivering it to where it needs to be so that they can live in all kinds of conditions, warm or cold water, and water with high or low oxygen levels," says Dr Rummer.

"This trait may be particularly central to performance in athletic species, such as long distance swimming salmon or fast swimming tuna," adds co-author, Dr Colin Brauner from the University of British Columbia.

"For fish, enhanced oxygen delivery may be one of the most important adaptations of their 400 million year evolutionary history," Dr Brauner says.

Citation: Root effect haemoglobins in fish may greatly enhance general oxygen delivery relative to other vertebrates in published in the journal, Plos One.
http://dx.plos.org/10.1371/journal.pone.0139477
on October 06, 2015