Cornell University engineers have developed a method to re-create the arrangement of muscles of an octopus tentacle, using an elastomer and 3D printer.

The research was groundbreaking since until now, 3D printing methods could not directly print a soft robotic device with as much agility and degree of freedom as the new method provides, according to Rob Shepherd, assistant professor of mechanical and aerospace engineering and senior author of the study. 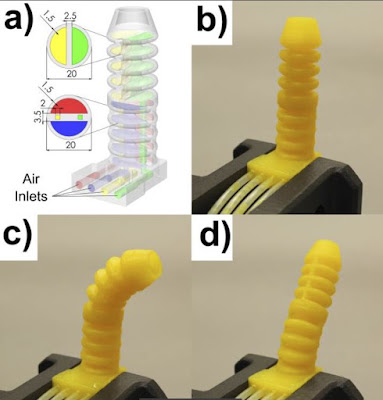 The research team developed the mechanical design using a digital mask projection stereolithgraphy system for the 3D printing of soft actuators. The system is detailed in a recent study published in the journal Bioinspiration & Biomimetics, by Ph.D. student and lead-author Bryan Peele and the team of researchers.

Last year engineers from Harvard and Cornell Universities have created a shape-changing “soft” robot that can tread over a variety of adverse environmental conditions including snow, puddles of water, flames, and the crushing force of being run over by an automobile.


“Based on the demonstration reported here and the possibilities for improved materials, this nascent printing process for soft actuators is a promising route to sophisticated, biomimetic systems.”

The research was funded by the Air Force Office of Scientific Research, 3M and the National Science Foundation.