Your Gut Bacteria Determines the Best Diet To Lose Weight

New research enables "tailored" diet advice – based on our personal gut microbiome – for persons who want to lose weight and reduce the risk of disease. Systems biologists at Chalmers University of Technology have for the first time successfully identified in detail how some of our most common intestinal bacteria interact during metabolism.

The researchers at Chalmers University of Technology have developed a mathematical calculation platform that makes it possible to predict how different patients will respond to a modified diet, depending on how their gut microbiome is composed.

The computational algorithm allowed for calculation of micronutrient content in different foods, and hereby it is possible to calculate how diet impacts the metabolism in the human gut microbiome. In the study it was found that subjects with low gene counts (LGC), having a compressed gut microbiota, respond better to dietary intervention than subjects with a high gene count (HGC), due to differences in the metabolism of the gut microbiota in the two groups. 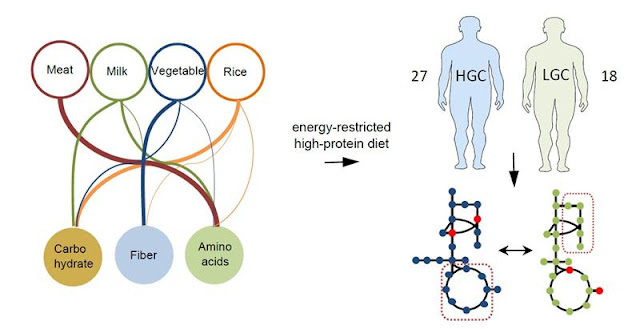 Work has been conducted in cooperation in the context of the EU funded project Metacardis, coordinated by professor Karine Clement at Institute of Cardiometabolism and Nutrition (Ican, Pitié-Salpêtrière Hospital, Inserm/Sorbonne University) in Paris and also includes professor Fredrik Bäckhed at the University of Gothenburg.

"This method allows us to begin identifying each individual bacteria type's metabolism and thus get a handle on the basic mechanisms in human metabolism," says Jens Nielsen, professor of systems biology at Chalmers and head of the research team.

There can be up to 1,000 different types of bacteria and other microorganisms in the human digestive system, many of which take part in metabolism in one way or another. The composition of the human gut microbiome greatly varies between individuals, for reasons that are largely unknown. However, research over the past few years has shown that there is a connection between some diseases and the composition of the gut microbiome.

"This is clear as regards type 2 diabetes, hardening of the arteries and obesity, for example. There are also indications that the same might apply to depression and the body's ability to respond to various cancer treatments," says Jens Nielsen.

Exactly how microorganisms interact with food, the individual and not least each other is extremely complex. Until now it has been very difficult to gain understanding of what the causal links are. In a study that was recently published in Cell Metabolism, however, researchers prove, through clinical trials, that the mathematical modelling they developed works.

The point of departure is a diet experiment that was performed at Ican. First the gut microbiome was characterised for individuals in a group of overweight patients, and then they were put on a weight loss diet. Everyone lost weight, which was expected. In patients with low-diversity gut microbiome, however, the content of several substances that generally indicate health risks was also reduced in the individuals' blood and faeces. This was a deviation from the patients who had gut microbiome with greater "biological diversity". Their health situation was not affected to the same extent.

Of real interest, however, is that the systems biologists from Chalmers with their modelling tools have largely been able to explain why both patient groups reacted as they did to the diet.

"Amongst other things, we have been able to demonstrate that the intestines of the individuals with low-diversity gut microbiome produce fewer amino acids when they follow this diet. This is one explanation for the improved blood chemistry.

In the short term, Jens Nielsen believes the research will make it easier for physicians to identify overweight patients who are at higher risk of cardiometabolic disease and could truly achieve major health benefits by modifying their diet and losing weight. Fairly soon it should be possible to design diet recommendations that take the gut microbiome of individual patients into account. Karine Clement is already thinking along these lines and new follow up clinical experiments are being designed.

"In the long term we might be able to add intestinal bacteria for patients whose metabolism does not function properly," she explains.

What are known as probiotics are already being used – various yoghurt cultures are one example – but the task of these bacteria is primarily to stabilise the intestines and create a favourable environment.

"The next generation of probiotics will pertain more to adding bacteria that integrate directly with the existing gut microbiome and make a lasting change to the composition," says Jens Nielsen.

The company Metabogen was founded based on collaboration between researchers at Chalmers and the University of Gothenburg and it will aim to develop these types of drugs.