The indications of climate change are all around us today but now researchers have revealed for the first time when and where the first clear signs of global warming appeared in the temperature record and where those signals are likely to be clearly seen in extreme rainfall events in the near future.

The new research published in Environmental Research Letters gives an insight into the global impacts that have already been felt, even at this very early stage, and where those impacts are likely to intensify in the coming years.

"We examined average and extreme temperatures because they were always projected to be the measure that is most sensitive to global warming," said lead author from the ARC Centre of Excellence for Climate System Science, Dr Andrew King.

Median time of anthropogenic emergence and zonally averaged signal and noise for climate means and extremes are shown. Maps of median TAE averaged across 23 model simulations for (a) and (b) mean surface air temperature, (c) and (d) highest daily maximum temperature, (e) and (f) lowest daily minimum temperature, (g) and (h) total precipitation, and (i), (j) maximum 1-d precipitation for (a), (c), (e), (g) and (i) June-August and (b), (d), (f), (h) and (j) December-February. Zonally averaged values of signal (red) and noise (black) are shown where signal is the mean difference in the variable between 1989-2039 and 1860-1910, and noise is the standard deviation of the variable for 1860-1910. 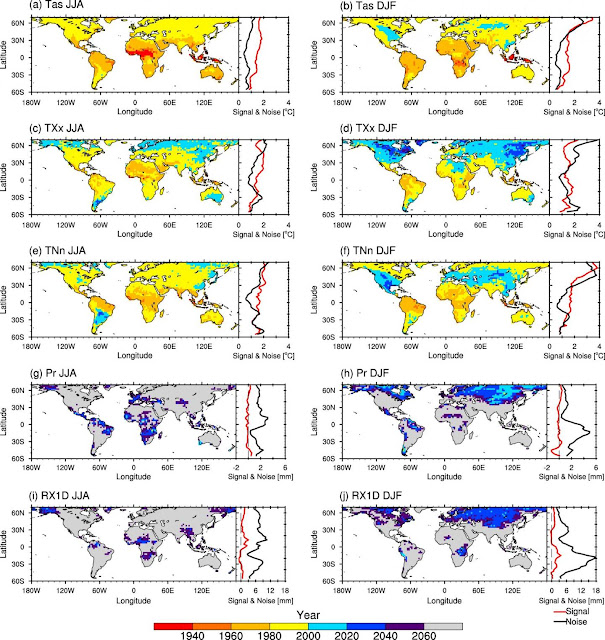 "Remarkably our research shows that you could already see clear signs of global warming in the tropics by the 1960s but in parts of Australia, South East Asia and Africa it was visible as early as the 1940s."

The reason the first changes in average temperature and temperature extremes appeared in the tropics was because those regions generally experienced a much narrower range of temperatures. This meant smaller shifts in the temperature record due to global warming were more easily seen.

The first signal to appear in the tropics was the change in average temperatures. Later extreme temperature events showed a global warming signal.

One of the few exceptions to this clear global warming signal was found in large parts of the continental United States, particularly on the Eastern coast and up through the central states. These regions have yet to manifest obvious warming signals according to the models but it is expected they will appear in the next decade.

While temperature records generally showed pronounced indications of global warming, heavy rainfall events have yet to make their mark. The models showed a general increase in extreme rainfall but the global warming signal was not strong enough yet to rise above the expected natural variation.

"We expect the first heavy precipitation events with a clear global warming signal will appear during winters in Russia, Canada and northern Europe over the next 10-30 years," said co-author Dr Ed Hawkins from the National Centre for Atmospheric Science at the University of Reading, UK.

"This is likely to bring pronounced precipitation events on top of the already existing trend towards increasingly wet winters in these regions."

Importantly, the findings closely correspond to observational datasets used by the IPCC (Chapter 10 - Detection and Attribution of Climate Change) in its most recent report, which showed increasing temperatures caused by global warming.