Stanford researchers have ripped the guts out of a virus and totally redesigned its core to repurpose its infectious capabilities into a safe vehicle for delivering vaccines and therapies directly where they are needed.

The study reported today in the Proceedings of the National Academy of Sciences breathes new life into the field of targeted delivery, the ongoing effort to fashion treatments that affect diseased areas but leave healthy tissue alone.

"We call this a smart particle," said James Swartz, the professor of chemical engineering and of bioengineering at Stanford who led the study. "We make it smart by adding molecular tags that act like addresses to send the therapeutic payload where we want it to go."

Professor James Swartz holds an enlarged replica of a virus-like particle. Swartz and his team have re-engineered a virus to deliver therapies to cells. 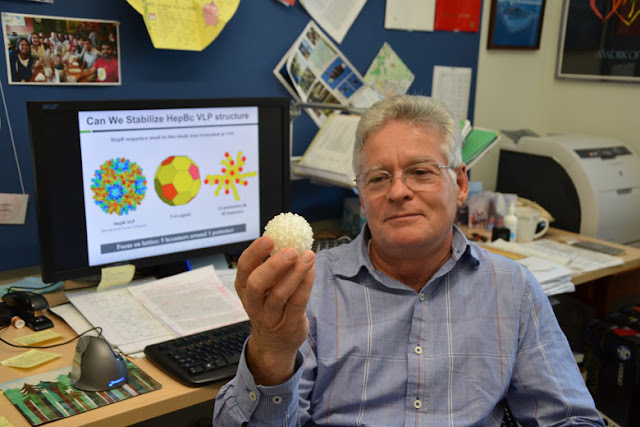 Using the smart particle for immunotherapy would involve tagging its outer surface with molecules designed to teach the body's disease-fighting cells to recognize and destroy cancers, Swartz said.

For Swartz and his principal collaborator, Yuan Lu, now a pharmacology researcher at the University of Tokyo, the result is a vindication. When they first started the research four years ago, funding agencies said it couldn't be done.

It will require much more effort to accomplish the second goal - packing tiny quantities of medicines into the smart particles, delivering the particles to and into diseased cells, and engineering them to release their payloads.

"This was a proof-of-principle experiment so there's a lot of work to be done," Swartz said. "But I believe we can use this smart particle to deliver cancer-fighting immunotherapies that will have minimal side effects."

Massachusetts Institute of Technology Professor Robert Langer, a leader in targeted drug delivery research who was not connected to the Stanford experiments, also read the paper before publication.

"This is terrific work, a beautiful paper," Langer said. "Dr. Swartz and colleagues have done a remarkable job of stabilizing viruslike particles and re-engineering their surface."

Targeted drug delivery is one of the ultimate goals of medicine because it seeks to focus remedies on diseased cells, minimizing the side effects that occur when, for instance, radiation or chemotherapies harm healthy cells while treating cancer.

Looking for a model in nature, many researchers focused on viruses, which target specific cells, sneak in and deliver an infectious payload. The new paper describes how the Stanford team designed a viruslike particle that is only a delivery vehicle with no infectious payload.

They started with the virus that causes Hepatitis B. This virus has three layers like an egg, and the researchers focused on the non-infectious middle layer, called the capsid. It is a complex protein structure, and when properly assembled this capsid looks like a skeletal soccer ball with lots of spikes sticking out.

Other researchers have had the same idea for repurposing the Hepatitis B capsid because its hollow structure is large enough, in theory, to carry a significant medical payload. But in practice this had proven so difficult that when Swartz floated the idea to funding agencies they said no.

But Swartz was so certain his approach would work that he found ways to bootstrap the project over the several years that it took to finish his experiments.

Biotechnologists know how to build the complex protein structures they find in nature, but the Stanford team took this further. They didn't just build the capsid nature provided. They studied the DNA that directs the structure to assemble and re-engineered the code to custom-design a capsid that would be invisible to the immune system, sturdy enough to survive a trip through the bloodstream and have a surface that would be simple to attach molecular tags to.

Finally, the researchers had to make all these modifications without destroying the miraculous capability of the capsid's DNA code to direct 240 copies of one protein to self-assemble into a hollow sphere with a spiky surface.

Swartz said the next step is to attach cancer tags to the outside of this smart particle, to use it to train the immune system to recognize certain cancers. Those experiments would likely occur in mice.

After that he will add the next function - further engineering the DNA code to make sure that the protein can self-assemble around a small medicinal payload.

"That will be quite complicated, but we've already gotten this far when they said it couldn't be done," Swartz said.

Stanford has patented the technology and different aspects are licensed to a biotechnology company in which Swartz has a founding interest. The approach is in its early stages and there is as yet no timetable for commercial development.