Mathematicians investigating one of science's great questions -- how to unite the physics of the very big with that of the very small -- have discovered that when the understanding of complex networks such as the brain or the Internet is applied to geometry the results match up with quantum behavior.

The findings, published today (Thursday) in Scientific Reports, by researchers from Queen Mary University of London and Karlsruhe Institute of Technology, could explain one of the great problems in modern physics.

Currently ideas of gravity, developed by Einstein and Newton, explain how physics operates on a very large scale, but do not work at the sub-atomic level. Conversely, quantum mechanics works on the very small scale but does not explain the interactions of larger objects like stars. Scientists are looking for a so called 'grand unified theory' that joins the two, known as quantum gravity.

An image illustrating the different dimensions of Complex Quantum Network Manifolds. Annotations in other image. 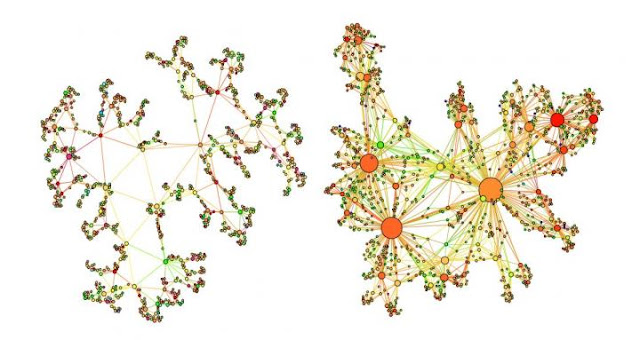 Several models have been proposed for how different quantum spaces are linked but most assume that the links between quantum spaces are fairly uniform, with little deviation from the average number of links between each space. The new model, which applies ideas from the theory of complex networks, has found that some quantum spaces might actually include hubs, i.e. nodes with significantly more links than others, like a particularly popular Facebook user.

Calculations run with this model show that these spaces are described by well-known quantum Fermi-Dirac, and Bose-Einstein statistics, used in quantum mechanics, indicating that they could be useful to physicists working on quantum gravity.

Dr Ginestra Bianconi, from Queen Mary University of London, and lead author of the paper, said: "We hope that by applying our understanding of complex networks to one of the fundamental questions in physics we might be able to help explain how discrete quantum spaces emerge.

An annotated diagram illustrating the research. 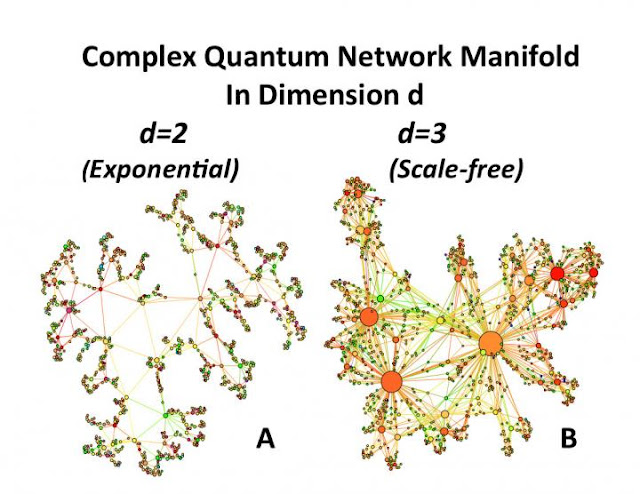 "What we can see is that space-time at the quantum-scale might be networked in a very similar way to things we are starting to understand very well like biological networks in cells, our brains and online social networks."

Contacts and sources:
Will Hoyles
Queen Mary University of London
on September 24, 2015