People across the western hemisphere may be surprised to see a rust-coloured Moon in the sky on 28 September. Early that morning (the evening of the 27 September for observers in North and South America) will be this year’s second total eclipse of the Moon. From the UK, this will be the first total lunar eclipse visible since 2008, and the last one visible in its entirety until 2019. 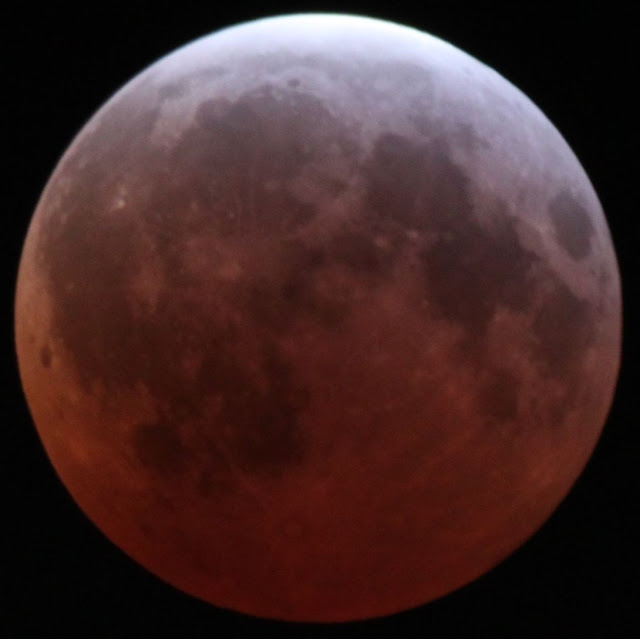 In a total lunar eclipse, the Earth, Sun and Moon are almost exactly in line and the Moon is on the opposite side of the Earth from the Sun. The Moon is full, moves into the shadow of the Earth and dims dramatically but usually remains visible, lit by sunlight that passes through the Earth’s atmosphere. Stronger atmospheric scattering of blue light means that the light that reaches the lunar surface is predominantly red in colour so observers on Earth see a Moon that may be brick-coloured, rusty, blood red or sometimes dark grey, depending on terrestrial conditions.

The Moon travels to a similar position every month, but the tilt of the lunar orbit means that it normally passes above or below the terrestrial shadow. So in most months the full Moon is seen but no eclipse takes place.

Lunar eclipses are visible wherever the Moon is above the horizon. The whole of this eclipse will be visible from west Africa, most of Western Europe including the British Isles, most of North America and the whole of South America. Depending on their location, sky watchers just outside these regions should be able to see at least part of the eclipse too.

In the UK night owls and early risers will both have a chance to watch the eclipse. It begins at 0110 BST when the Moon enters the lightest part of the Earth’s shadow, the penumbra. Soon after the Moon will have a slight yellowish hue. At 0207 BST the Moon starts to enter the dark core of the Earth’s shadow, the umbra. At 0311 BST the Moon will be completely within the umbra – the ‘total’ part of the eclipse has begun. This is the time when it should have an obvious red colour. Mid-eclipse is at 0347 BST and the total phase ends at 0424 BST. At 0527 BST the Moon leaves the umbra and the eclipse ends when the Moon leaves the penumbra at 0624 BST.

During the eclipse the Moon lies in front of the stars of the constellation of Pisces, in the UK appearing to be beneath and to the left of the square of Pegasus. As the eclipse progresses the Moon will move from roughly due south to southwest in the sky.

The Moon will also be very near its minimum distance from the Earth (perigee), so will be appear to be near its maximum apparent size. This means that in clear skies, the lunar eclipse promises to be a spectacular sight.

Unlike the solar equivalent, the whole event is also completely safe to watch and needs no special equipment, so can just be enjoyed as a free astronomical spectacle.