Scientists Home In on Origin of Human, Chimpanzee Facial Differences

The face of a chimpanzee is decidedly different from that of a human, despite the fact that the apes are our nearest relative in the primate tree. Now researchers at the Stanford University School of Medicine have begun to pinpoint how those structural differences could arise in two species with nearly identical genetic backgrounds. 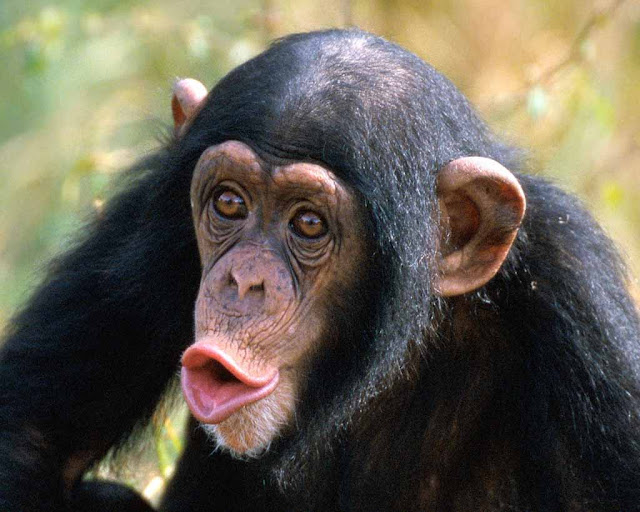 The key lies in how genes involved in facial development and human facial diversity are regulated -- how much, when and where the genes are expressed-- rather than dissimilarities among the genes themselves. In particular, the researchers found that chimps and humans express different levels of proteins known to control facial development, including some involved in jaw and nose length and skin pigmentation.

"We are trying to understand the regulatory changes in our DNA that occurred during recent evolution and make us different from the great apes," said Joanna Wysocka, PhD, associate professor of developmental biology and of chemical and systems biology. "In particular, we are interested in craniofacial structures, which have undergone a number of adaptations in head shape, eye placement and facial structure that allow us to house larger brains, walk upright and even use our larynx for complex speech."

The researchers coined the term "cellular anthropology" to explain how some steps of early primate development can be mimicked in a dish, and thus used to study gene-expression changes that can shed light on our recent evolutionary past.

The role of enhancer regions

For their comparison, the researchers focused on areas of DNA known as enhancer regions in human and chimpanzee genomes. These regions contain chemical tags and proteins bound to the DNA that control when, where and how nearby genes are expressed. Prescott and her colleagues wondered whether differences in the way proteins bind to these enhancer regions during development could explain morphological differences between humans and chimpanzees.

"We wanted to look at how the activity of these enhancer regions may have changed during recent evolution," said Wysocka. "Many recent studies have shown that changes in the DNA sequences of enhancers may mediate morphological differences among species."

To conduct the study, however, Prescott and her colleagues had to obtain a specialized type of cell present only in very early primate development. The cells, called cranial neural crest cells, originate in humans within about five to six weeks after conception. Although they first appear along what eventually becomes the spinal cord, the neural crest cells then migrate over time to affect facial morphology and differentiate into bone, cartilage and connective tissue of the head, and face.

"These cells are unique," said Prescott. "If we want to understand what makes human and chimp faces different, we have to look to the source -- to the cell types responsible for making these early patterning decisions. If we were to look later in development or in adult tissues, we would see differences between the species but they will tell us little about how those differences were created during embryogenesis. But accessing early cell types like neural crest cells can be quite difficult, especially when studying primates."

To obtain this elusive cell type, the researchers used induced pluripotent stem cells, or iPS cells, made from chimpanzees. IPS cells, which are made from easy-to-obtain skin or blood samples, can be coaxed to become other tissues. Although iPS cells from humans have been well-studied, they've only recently been made from chimpanzees in the laboratory of Fred Gage, PhD, a professor of genetics at the Salk Institute for Biological Studies and a co-author of the study.

Prescott and her colleagues coaxed human and chimpanzee iPS cells to become cranial neural crest cells by growing them in the laboratory under a specific set of conditions. They then examined enhancer regions throughout the genome, looking for those that were not just active and therefore likely to be involved in craniofacial development, but also those whose patterns or degrees of activity seemed to vary between human and chimpanzee cells.

"Of course, humans and chimps are very closely related," said Wysocka. "Most of the regulatory elements are the same between the two species. But we did find some differences. In particular, we found about 1,000 enhancer regions that are what we termed species-biased, meaning they are more active in one species or the other. Interestingly, many of the genes with species-biased enhancers and expression have been previously shown to be important in craniofacial development or associated with normal intrahuman facial variation."

In particular, the researchers found that two genes, PAX3 and PAX7, known to affect snout length and shape in laboratory mice, as well as skin pigmentation, were expressed at higher levels in chimpanzees than in humans. Humans with less than the normal amount of PAX3 have a condition called Waardenburg syndrome, which includes craniofacial, auditory and pigmentation defects. Genomewide association studies in humans have identified PAX3 as a region involved in normal facial variation.

In contrast, another gene known to be involved in determining the shape of the beaks of finches and the jaw of a fish called a cichlid was expressed at higher levels in humans than in chimpanzees. In mice, overexpression of this gene, BMP4, in cranial neural crest cells causes a marked change in face shape, including a rounding of the skull and eyes that are more near the front of the face.

"We are now following up on some of these more interesting species-biased enhancers to better understand how they impact morphological differences," said Wysocka. "It's becoming clear that these cellular pathways can be used in many ways to affect facial shape."