Scientists from Virginia Tech and the University of Bristol have revealed how pigment can be detected in mammal fossils, a discovery that may end the guesswork in determining the colors of extinct species.

Scientists were able to determine the reddish brown color of a bat species known as Palaeochiropteryx from fossils found in Messel, Germany. The fossil is estimated to about 49 million years old. 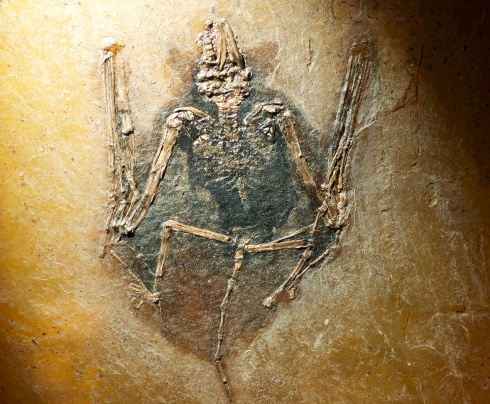 Photo by Jakob Vinther/University of Bristol.

The researchers discovered the reddish brown color of two extinct species of bat from fossils dating back about 50 million years, marking the first time the colors of extinct mammals have been described through fossil analysis.

The techniques can be used to determine color from well-preserved animal fossils that are up to 300 million years old, researchers said.

"We have now studied the tissues from fish, frogs, and tadpoles, hair from mammals, feathers from birds, and ink from octopus and squids," said Caitlin Colleary, a doctoral student of geosciences in the College of Science at Virginia Tech and lead author of the study. "They all preserve melanin, so it's safe to say that melanin is really all over the place in the fossil record. Now we can confidently fill in some of the original color patterns of these ancient animals."

The research involved scientists from the U.S., the United Kingdom, Germany, Ethiopia, and Denmark. It is being published this week (Sept. 28) in the Proceedings of the National Academy of Sciences.

The researchers said microscopic structures traditionally believed to be fossilized bacteria are in fact melanosomes -- organelles within cells that contain melanin, the pigment that gives colors to hair, feathers, skin, and eyes.

Fossil melanosomes were first described in a fossil feather in 2008 by Jakob Vinther, a molecular paleobiologist at the University of Bristol and the senior author of the current study.

Since then, the shapes of melanosomes have been used to look at how marine reptiles are related and identify colors in dinosaurs and, now, mammals.

"Very importantly, we see that the different melanins are found in organelles of different shapes: reddish melanosomes are shaped like little meatballs, while black melanosomes are shaped like little sausages and we can see that this trend is also present in the fossils," Vinther said. "This means that this correlation of melanin color to shape is an ancient invention, which we can use to easily tell color from fossils by simply looking at the melanosomes shape."

Caitlin Colleary, a doctoral student of geosciences in the College of Science at Virginia Tech, says the original color patterns of ancient animals can be determined through fossils. 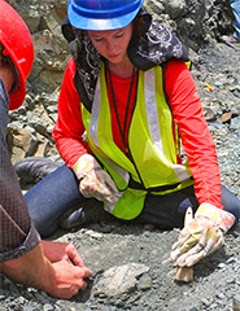 In addition to shape, melanosomes are chemically distinct.

In addition, researchers replicated the conditions under which the fossils formed to identify the chemical alteration of melanin, subjecting modern feathers to high temperatures and pressures to better understand how chemical signatures changed during millions of years of burial.

"By incorporating these experiments, we were able to see how melanin chemically changes over millions of years, establishing a really exciting new way of unlocking information previously inaccessible in fossils, Colleary said.

"It was important to bring microchemistry into the debate, because discussion has been going on for years over whether these structures were just fossilized bacteria or specific bodies where melanin is concentrated," said Roger Summons, the Schlumberger Professor of Earth Science at the Massachusetts Institute of Technology, who was not involved in the research. "These two things have very different chemical compositions."

Summons, who was part of a research team that studied fossils of squid to show that ink from the Jurassic period was chemically indistinguishable from modern cuttlefish ink, said the study further helps demonstrate how all living things on Earth have evolved in concert.

"How color is imparted and how we characterize it in fossils are important, because they inform us about a very specific aspect of the history of life on our planet," Summons said. "For complex animal life, color is a factor in how individuals recognize and respond to others, determine friend or foe, and find mates. This research provides another thread to understand how ancient life evolved. Color recognition was an important part of that process, and it goes far back in the history of animals."