Research Leads to New View of the Earth’s Core

There is more oxygen in the core of Earth than originally thought.

Lawrence Livermore geologist Rick Ryerson and international colleagues discovered some new findings about Earth’s core and mantle by considering their geophysical and geochemical signatures together.

This research provides insight into the origins of Earth’s formation.

Based on the higher oxygen concentration of the core, Ryerson’s team concludes that Earth must have accreted material that is more oxidized than the present-day mantle, similar to that of planetesimals such as asteroidal bodies. A planetesimal is an object formed from dust, rock and other materials and can be can be anywhere in size from several meters to hundreds of kilometers.

This model shows planetesimals (objects formed from dust, rock and other materials that can be anywhere in size from several meters to hundreds of kilometers) accreting to a growing Earth 4.56 billion years ago. The cutaway reveals the simultaneous formation of the Earth’s core as dense, iron-rich metallic material descending through a planetary magma ocean. 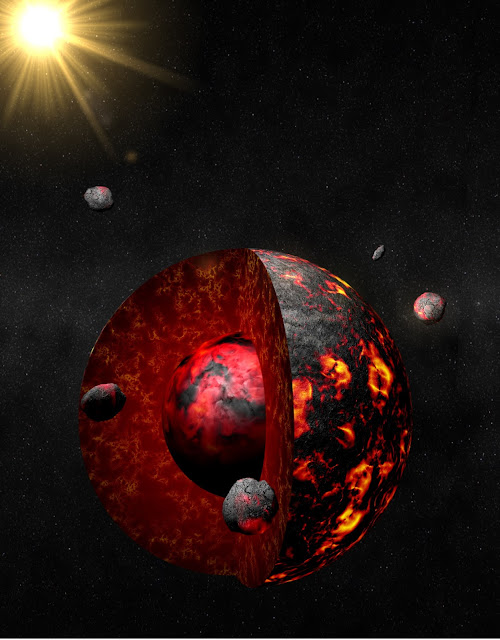 Earth formed about 4.56 billion years ago over a period of several tens of millions of years through the accretion of planetary embryos and planetesimals. The energy delivered by progressively larger impacts maintained Earth’s outer layer and an extensively molten magma ocean. Gravitational separation of metal and silicate within the magma ocean results in the planet characterized by a metallic core and a silicate mantle.

“This new model is at odds with the current belief that core formation occurred under reduction conditions,” Ryerson said. “Instead we found that Earth’s magma ocean started out oxidized and has become reduced through time by oxygen incorporation into the core.”

The research appears in the online edition of the Sept. 21-25 edition of theProceedings of the National Academy of Sciences(link is external).