Just as in the well-known children's story of Goldilocks and the Three Bears, something good happens when things are done in moderation, rather than in extremes. Now a new study has translated "not too hot or too cold, just right" to the quantum world and the generation of quantum entanglement - the binding within and between matter and light -and suggests that the universe started "neither too fast nor too slow."

By studying a system that couples matter and light together, like the universe itself, researchers have now found that crossing a quantum phase transition at intermediate speeds generates the richest, most complex structure. Such structure resembles "defects" in an otherwise smooth and empty space. The findings are published in Physical Review A, the American Physical Society's main journal. 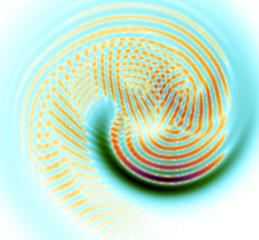 "Our findings suggest that the universe was 'cooked' at just the right speeds," said Neil Johnson, professor of physics in the University of Miami College of Arts & Sciences and one of the authors of the study. "Our paper provides a simple model that can be realized in a lab on a chip, to explore how such defect structure develops as the speed of cooking changes."

The big mystery concerning the origin of the universe is how the star clusters, planetary systems, galaxies, and other objects that we now see managed to evolve out of nothing. There is a widespread belief within the scientific community that the birth of structure in the universe lies in the crossing of a quantum phase transition and that the faster the transition is crossed, the more structure it generates. The current findings contradict that belief.

The study sheds new light on how to generate, control, and manipulate quantum entanglement, since the defects contain clusters of quantum entanglement of all sizes. The findings hold the key to a new generation of futuristic technologies--in particular, ultrafast quantum computing, ultrasafe quantum cryptography, high-precision quantum metrology, and even the quantum teleportation of information.

"Quantum entanglement is like the 'bitcoin' that funds the universe in terms of interactions and information," Johnson said. "It is the magic sauce that connects together all objects in the universe, including light and matter."

Johnson likes to compare the emergence of highly entangled light-matter structures, as the quantum phase transition is crossed, with the way lumps of porridge appear out of "nothing," when you heat up milk and oats.

The results of the study, titled "Enhanced dynamic light-matter entanglement from driving neither too fast nor too slow," are robust for a wide range of system sizes, and the effect is realizable using existing experimental setups under realistic conditions. O.L. Acevedo, from Universidad de los Andes, Colombia, is first author of the study. Other co-authors from Universidad de los Andes are L. Quiroga and F. J. Rodriguez.

The current paper opens up a novel line of investigation in this area. In addition, it provides a unique opportunity to design and build new nanostructure systems that harness and manipulate quantum entanglement effects. The researchers are now looking at specifying the precise conditions that experimentalists will need in order to see the enhanced quantum entanglement effect that they predict.


Contacts and sources:
Megan Ondrizek
University of Miami
on September 24, 2015