Working in a cave complex deep beneath South Africa's Malmani dolomites, an international team of scientists has brought to light an unprecedented trove of hominin fossils -- more than 1,500 well-preserved bones and teeth -- representing the largest, most complete set of such remains found to date in Africa.

Skeletal fossils of the hand of Homo naledi pictured in the Wits bone vault at the Evolutionary Studies Institute at the University of the Witwatersrand, Johannesburg, South Africa, on Sept. 13, 2014. The fossil hand is one of many fossils representing a new species of hominin. The broad thumb of Homo naledi suggests it was an expert climber. The Rising Star Expedition, a project that retrieved and analyzed the fossils was led in part by paleoanthropologist John Hawks, professor of anthropology at the University of Wisconsin-Madison. 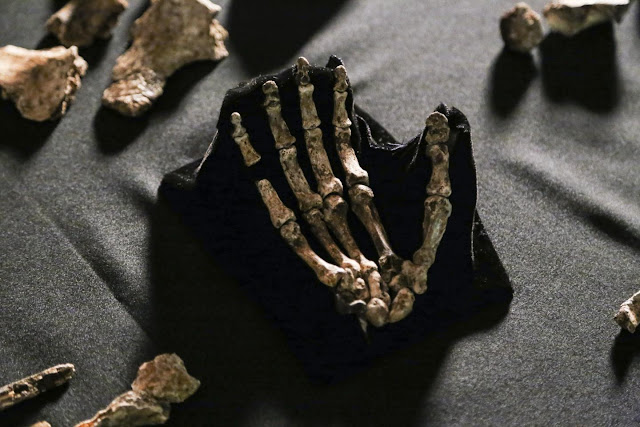 
The discovery of the fossils, cached in a barely accessible chamber in a subterranean labyrinth not far from Johannesburg, adds a new branch to the human family tree, a creature dubbed Homo naledi.

The remains, scientists believe, could only have been deliberately placed in the cave.

So far, parts of at least 15 skeletons representing individuals of all ages have been found and the researchers believe many more fossils remain in the chamber. It is part of a complex of limestone caves near what is called "The Cradle of Humankind," a World Heritage Site in Gauteng province well known for critical paleoanthropological discoveries of early humans, including the 1947 discovery of 2.3 million-year-old Australopithecus africanus.

"We have a new species of Homo, with all of its interesting characteristics," says John Hawks, a University of Wisconsin-Madison paleoanthropologist and one of the leaders of a team that painstakingly retrieved the fossils under excruciatingly cramped and difficult conditions. "We now have the biggest discovery in Africa for hominins."

The find was reported today (Sept. 10, 2015) with the publication of two papers in the open access journal eLife by a group led by paleoanthropologist Lee R. Berger of the University of Witwatersrand. The expedition to retrieve the fossils and their subsequent analysis was supported by the National Geographic Society.

With a small head and brain, hunched shoulders, powerful hands and thin limbs, Homo naledi was built for long-distance walking, says Hawks, an expert on early humans. Fully grown, it stood about five feet tall, was broad chested, walked upright and had a face, including a smile that was probably more human than apelike. Powerful hands imply it was also a climber.

The fossils have yet to be dated. The unmineralized condition of the bones and the geology of the cave have prevented an accurate dating, says Hawks. "They could have been there 2 million years ago or 100,000 years ago, possibly coexisting with modern humans. We don't yet have a date, but we're attempting it in every way we can."

Skeletal fossils of Homo naledi are pictured in the Wits bone vault at the Evolutionary Studies Institute at the University of the Witwatersrand, Johannesburg, South Africa, on Sept. 13, 2014. The fossils are among nearly 1,700 bones and teeth retrieved from a nearly inaccessible cave near Johannesburg. The fossil trove was created, scientists believe, by Homo naledi repeatedly secreting the bodies of their dead companions in the cave. Analysis of the fossils -- part of a project known as the Rising Star Expedition -- was led in part by paleoanthropologist John Hawks, professor of anthropology at the University of Wisconsin-Madison. 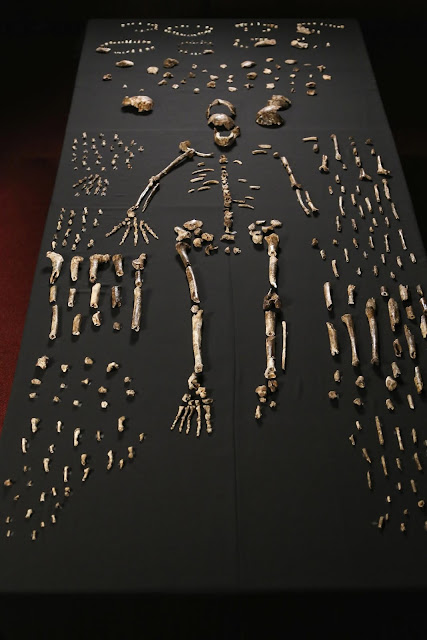 So far, the remains of newborns to the aged have been retrieved from the cave and the researchers expect that many more bones remain in the chamber, which is nearly 100 feet underground and accessible only after squeezing, clambering and crawling 600 feet to a large chamber where the brittle fossils cover the floor.

"We know about every part of the anatomy, and they are not at all like humans," notes Hawks, who co-directed the analysis of the fossils. "We couldn't match them to anything that exists. It is clearly a new species."

The astonishing find was made initially by amateur cavers and thought at the time to be a single hominin skeleton. The fossils were retrieved by a band of diminutive paleoanthropologists, all women, recruited for their size.

"Naledi" means star in the Sesotho language and is a reference to the Rising Star cave system that includes the chamber, known as the Dinaledi Chamber, where the fossils were found. The circuitous and difficult passage to the chamber narrows at one point to a bare seven inches.

In addition to identifying an entirely new species in the genus Homo, the collections of fossils, which bear no marks from predators or scavengers, are strong evidence that Homo naledi was deliberately depositing its dead in the cave, according to Hawks, a UW-Madison professor of anthropology.

"We think it is the first instance of deliberate and ritualized secreting of the dead," says Hawks. "The only plausible scenario is they deliberately put bodies in this place."

The cave, according to Hawks, was likely more accessible to Homo naledi than it is today for modern humans. Geochemical tests, however, show that the cave was never open to the surface, raising intriguing questions about the behavior and technologies available to the creatures.

"We know it was not a death trap," says Hawks, referring to natural features like hidden sinkholes that sometimes trap and doom creatures over long periods of time. "There are no bones from other animals aside from a few rodents. And there are no marks on the bones from predators or scavengers to suggest they were killed and dragged to the chamber. We can also rule out that it was a sudden mass death."

Instead, Hawks, Berger and their colleagues believe the chamber was something like a repository. "It seems probable that a group of hominins was returning to this place over a period of time and depositing bodies," Hawks explains, adding that the supposition is akin to discovering similar behavior in chimpanzees. "It would be that surprising."

The way the bodies are arranged and their completeness suggests they were carried to the cave intact. "The bodies were not intentionally covered and we're not talking about a religious ceremony, but something that was repeated and repeated in the same place. They clearly learned to do this and did it as a group over time. That's cultural. Only humans and close relatives like Neandertals do anything like this."

Paleoanthropologist John Hawks, professor of anthropology at the University of Wisconsin-Madison, is pictured in the Biological Anthropology Lab in the Sewell Social Sciences building on March 31, 2015. Hawks is a leader of the Rising Star Expedition that discovered Homo naledi, a new species of hominid that existed on the South African landscape hundreds of thousands to millions of years ago.


So far, no other organic materials or evidence of fire have been found in the cave complex.

Dating the fossils remains a key problem to solve, says Hawks. "We depend on the geology to help us date things, and here the geology isn't much like other caves in South Africa. And the fossils don't have anything within them that we can date. It's a problem for us."

One hope, he says, is finding the remains of an animal that may have been a contemporary ofHomo naledi. The fossils are embedded in a matrix of soft sediment and there are layers that remain unexcavated.

According to Hawks, years of work remain at the site and to document and analyze all of the materials excavated from the Dinaledi Chamber. Plans, he says, include bringing many new technologies to bear on analyzing the fossils to help determine diet, rate of aging and where on the landscape the creatures may have been from.

The project to excavate the fossils and the May 2014 scientific workshop to analyze them were supported by the National Geographic Society, the South African National Research Foundation, the Gauteng Provincial Government, and Wits University. The Wisconsin Alumni Research Foundation also provided support, as did the Texas A&M College of Liberal Arts Seed Grant Program.

Berger led the Rising Star expedition as National Geographic Explorer-in-Residence. The expedition involved an international team of scientists, including six "underground astronauts" who descended into the Dinaledi chamber to excavate and retrieve the fossils ofHomo naledi.


Contacts and sources:
John Hawks
University of Wisconsin-Madison
on September 11, 2015